Madden NFL 23 is the first iteration of the long-running franchise since the passing of the man whose name has been on the cover of every one of its games. Fittingly, more than John Madden’s name appears on Madden NFL 23 as he has been given the honor of appearing on the cover. Start the game and the opening video sequence is a tribute to the coach and to Madden NFL games past. The opening game that you get dropped into the first time you play has been a rematch of the last Super Bowl the past few years, but this time it’s an All-Madden game between AFC and NFC teams composed of some of the coach’s favorite players. John Madden and Pat Summerall don’t call the game, but after good plays you will hear clips of Madden talking about what he thinks makes the player so good. It is a nice tribute to the coach, playing an all-star game that matches his top players against each other, but there’s not much Madden in Madden NFL 23 after that. I was left feeling that the tribute was just added onto the front of the game, without any effort made to integrate more of a tribute into any of the game proper. After watching the opening video sequence and seeing gameplay action from the SEGA Genesis days, I couldn’t help but think how great it would have been to include an emulation of that game within Madden NFL 23, or even if you were given the chance to play the original Apple II version. Oh well. Anyway, once you get past the All-Madden game, you’re in a game that’s a lot like Madden NFL 22.

While most of Madden NFL 23 is an iteration Madden NFL 22, there is an update to the passing game. You’re given three choices of how you want to control your passes, Placement + Accuracy, Placement + Power, or to just leave things like they’ve been before. The “Placement” half of both new passing modes gives you the ability to place the pass in relation to the receiver. For example, if you have a receiver headed to the sideline with a defender right behind him, you can place the ball between the receiver and the sideline so that only your receiver has a chance to get to it. The other half of the equation is controlled by a meter above the receiver’s head that challenges you to time your throw correctly. The additional pass controls are a welcome addition to a franchise that hasn’t don’t much to innovate for several years. 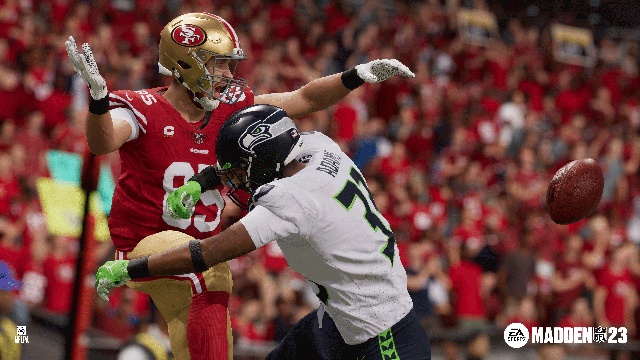 Unfortunately, the developers may have found that the greater control unbalanced the passing game and they had to compensate for that because the AI interception rate is ridiculous high in Madden NFL 23. I managed to set the NFL record for interceptions thrown in a game on more than one occasion. I’ve been playing Madden NFL for years and have never seen anything like it. There have been plays when I had a receiver open up over five yards of separation only to see the DB stop on a dime, leap straight up, and snatch the ball right out of the air. I basically had to restrict my passing game to short, quick routes because anything else was too high risk.

As for the game modes, last year’s modes all return with some minor tweaks here and there. The game’s marquee mode is Ultimate Team, for the primary reason that it’s the game’s monetization mode. This mode is inspired by trading card games – you obtain packs of virtual cards containing players and use them to put together your best possible lineup. You then use that team to play your way through a series of situational game challenges with a set of three goals to accomplish. Completing the first goal, which is usually something straightforward like winning the game starting in the fourth quarter, is enough to complete the challenge and move to the next one. The additional goals add stretch challenges such as scoring a rushing touchdown or shutting out your opponent. Completing these do more than just scratch your completionist itch, you’ll earn more game currency. Currency can be used to buy more packs and more packs mean more chances for better players. Of course, the packs that you can easily obtain after completing a handful of challenges are filled with mediocre players. Save your coins and do some grinding and you’ll be able to obtain packs with slightly better players, but access to the better players, and cards with upgraded versions of the better players, requires the purchase of premium currency with real-world currency. While there are seasonal events that reward completion with higher-tier cards, putting together a roster strong enough to compete with other players online is going to cost you money.

It's kind of interesting that Madden NFL Mobile is entirely built around the Ultimate Team concept, yet does it so much better. There you have much more opportunity to build a high rating team without the need to dole out any cash. But not only that, the interface is so much more intuitive in the mobile game - the entire Ultimate Team mode in Madden NFL 23 is a confusing mess of menus. Personally, whenever I feel like playing Madden: The Trading Card Game I’ll just reach for my iPad. 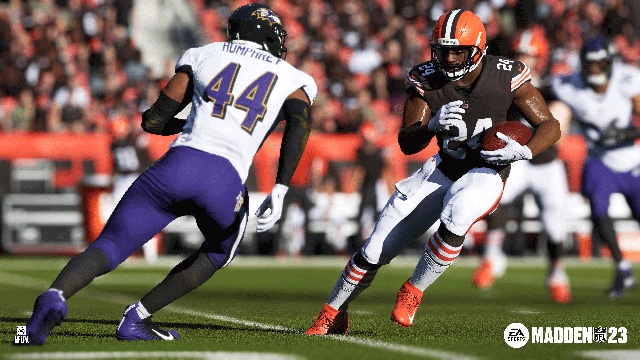 There are essentially two franchise modes in Madden NFL 23: Franchise Mode and Face of the Franchise. The essential difference between the two is that in Franchise Mode you can control your team as in other modes while in Face of the Franchise you take on the role of a single player. Face of the Franchise is a story-based mode that puts you in the role of a player with a few years in the NFL under your belt. You select your position – defense is now an option this year - and then you’ll get to choose which of the offers you get from each of the 32 teams you’ll sign. You can just pick your favorite team or go with one that has a need for a player at your position. The story is an on-rails experience that doesn’t seem to have any connection to your gameplay – I set the NFL record for interceptions in a game and was rewarded immediately afterwards with a licensing deal with Nike. Gameplay-wise, you pick what kind of training, promotional, or team-building exercises that you want to partake in during the week to collect related stat upgrades. You can get through the games pretty quickly when you just control the plays that you’re on the field for. Franchise Mode hasn’t change too much over last year – it’s still focused on fulfilling the roles of GM, head coach, and player for a franchise. This year there are some incremental updates in that you can scout potential players and manage the motivations of the players on your team, but this mode remains pretty familiar this year.

The Yard, a six-on-six playground mode on a shortened field, returns this year as well. You can create a player and compete with and against NFL players in a progression-based series of games that gives you the chance to unlock new uniforms and gear for your team. Of course, you can spend real money for premium gear if you want. This mode is tied together with Face of the Franchise, so you can use the same player you’ve created in both modes, with stat progression carrying over between the two modes. The gameplay in this mode can be fun – the games are fast-paced and a little crazy – but it’s more of a diversion for a change of pace from the primary NFL action than a replacement for it.

Superstar KO also returns – pick your favorite NFL team and take on another gamer online – or play with friends in 2v2 or 3v3 squad play. Superstar KO rounds consist of one drive each, with ties settled by tug of war – teams alternate plays taking over at the spot the other team advanced the ball to. Like The Yard, this mode features a progression track with rewards. This mode can be fun when you’re looking for a quick game against human competition. 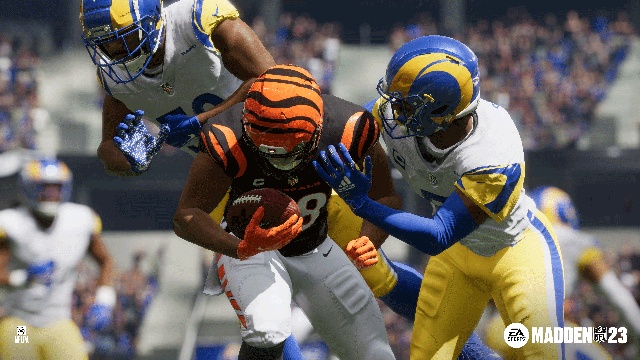 Madden NFL 23 is another incremental update in a franchise known for putting out incremental updates. Updated rosters, a few minor additions to existing game modes, and a couple of gameplay tweaks – you know the drill. The presentation is still thoroughly dull and even the soundtrack feels tired. The gameplay engine is in need of more than an incremental update, though. The “if it’s in the game, it’s in the game” game still feels more like you’re playing a Madden game than a simulation of an NFL game. With the passing of its namesake, perhaps it’s finally time to build a new game, one that NFL fans can really get excited about.

Final Rating: 66% - It's time for a new beginning for EA’s long-running football franchise.