Indigo 7: Quest for Love is a puzzle game inspired by color-matching games such as Puyo Puyo Tetris, but it puts a new twist on the gameplay of those games. While the goal is still to change as many squares – or hexagons in this case – to the same color, the mechanics are different. First of all, there’s nothing dropping onto the puzzle board. You start with control of a single hexagon in the bottom right corner of the board, and by changing its color you capture all adjacent hexes of the same color. With the next move you once again select a color change, but this time you’re changing the color of every hex that you’ve captured. Any hexes adjacent to any of the ones that you’ve already captured change to the same color and are captured. This continues until you capture the entire board or run out of moves, or rather your phone runs out of power in the game’s parlance. Your score doesn’t just depend on how much of the board that you capture, but also on the way you go about it. A combo multiplier increases your score with each move as long as you capture more hexagons than you did with the previous move. Focusing on the colors alone that you will capture with each move may help you capture the board faster, but it won’t necessarily maximize your score.

The game’s core mode is its story mode, which undoubtedly draws inspiration from Scott Pilgrim. Your character is the leader of a band who has girlfriend troubles, and the decisions he makes as the band goes on tour are all driven by the likelihood that they’ll lead to him finally finding the girl of his dreams. The story animations are very much comic-inspired, and the art style is decidedly Pilgrim-ish. This is probably the best aspect of the game, as the story and style come off more as an homage to Scott Pilgrim than as something derivative and the music is decidedly more enjoyable than the usual drivel on a loop that you get with puzzle games. 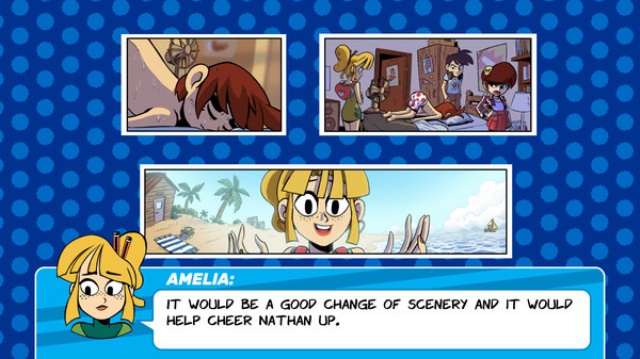 Unfortunately, the gameplay doesn’t manage to live up to its end of the bargain. Once you’ve been treated to a bit of story advancement, you’re taken to the puzzle gameplay which takes the form of a battle mode with your AI-controlled bandmates. You each work on your own randomly generated puzzle board, and each of the five rounds of the battle ends when someone completes their board or everyone has run out of moves. Once you get to the end, the total points are tallied and the winner is crowned. If that winner is you, you proceed to the next chapter of the story. If not, then you’ll have to try again, and keep trying again until you come in first. 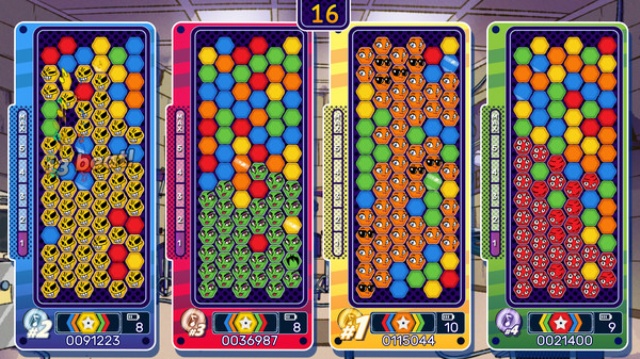 The problem with this is that the puzzle design rewards planning your moves in advance – you’ll want to make sure that you have enough moves to finish the board while also making those moves in such a way as to maximize your combo bonus. However, the match design instead rewards you for finishing first. Push your way to finish first and you’ll break your combos on the way and end up losing when the final scores are tallied. Try to plan your moves and you’ll consistently miss out on the round win bonuses, and still manage to have a lower combo score than at least one of your bandmates. It’s possible to sweep all five rounds by coming in first place, but the combo bonus is so unbalanced that you’ll likely lose the match anyway. A little persistence will eventually get you through the first few matches, but you’ll soon start running into a wall when the AI has progressed to the point at which it is generating almost insurmountable combo scores no matter how you play things. It’s not fair or balanced, and when you play a game that’s not fair or balanced it quickly leads to frustration.

There are a few standalone modes available in the game (including a couch battle version of the adventure mode matches), but honestly, they’re not compelling enough to keep you coming back or to warrant a purchase of the game. It’s a shame because the game’s aesthetics are quite appealing – I just wish more time was spent working out the balance issues in the puzzle gameplay. And when you come down to it, it’s all about the gameplay in a puzzle game.