Hot Wheels Unleashed imagines what it must be like to ride inside a Hot Wheels car as it races down one of those plastic tracks you build by linking segments together. In this case, though, you’re not a passenger letting gravity do the work. In fact, you’re not always constrained to a track.

For each race you’ll select a Hot Wheel from your collection. Each car is based on an actual Hot Wheel toy, and each is given a rating in categories such as acceleration and handling. These Hot Wheels come with steering and both a gas and a brake pedal, so you’re in full control with these cars. The scale is still the same, though, as the tracks are laid down across rooms like kitchens and basement dens instead of outdoor terrain. The tracks are wider than what you can buy for your physical, real-world cars because Hot Wheels Unleashed is a drift-focused arcade racer and so it has to give you some room to drift around the curves. You’ll need to master drifting to get around the curves without scraping the edge of the track, but also to add juice to your boost meter. Boosts can make the difference in a close race, but if your meter is empty, you can also keep an eye out for the boost zones on the track. 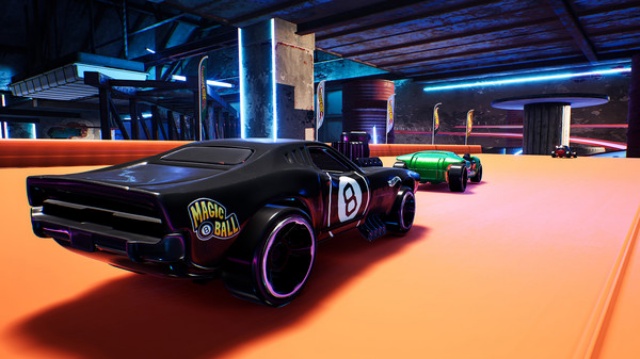 The tracks include the types of features you’d expect to find in a Hot Wheels track like loops and corkscrews, but you’ll also come across gaps in the tracks. These gaps give you some extra passing room, but you’ll need to make sure that you get back on the track when you reach the other side. You’ll also have to contend with a few obstacles, and if you keep your eyes open, you’ll find an occasional secret path as well.

You’ll be given your choice of a car to begin with, but after that you’ll grow your collection by earning coins as you progress through the game’s campaign or complete multiplayer races. The coins are spent on blind boxes, but there’s no monetization in place for earning coins, at least as of this writing. However, the game does offer some cars through the PlayStation Store – including licensed cars based on DC Comics and Street Fighter characters – or you can get them all along with some additional content by purchasing a season pack. You can also earn gears by completing races which can be applied to your cars to improve their base stats. 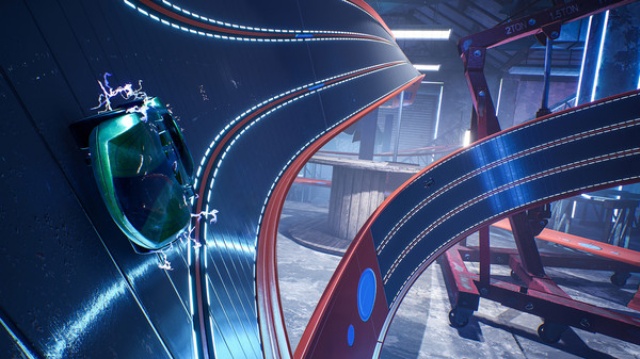 The game modes include a campaign that features a mix of races, time trails, and a few special events. Usually finishing in the top three of a race or beating the minimum track time in the trials is enough to mark the event complete and open the next one in the sequence for play. The event track isn’t completely linear, so if you’re having trouble with once particular event you can take a different branch to keep progressing and come back top that one later. In addition to the events, you can quick race against the AI on a track of your choosing. These races also let you earn coin and gears as well, but to unlock new items for your tracks or to decorate your environments you’ll have to play through the campaign.

There are different AI levels in the game, and anyone who’s played a few racing games before will have no trouble with the easier levels. It’s nice that they’re included, though, as they make the game more accessible to younger gamers. Veteran racing game studio Milestone is behind this game, so they know how to make the AI more challenging at the higher levels. The game keeps the racing free of any gimmicks such as rubber-banding to keep the races competitive. As such, a big mistake made in a race against tougher opponents can easily knock you out of contention.

The multiplayer mode is pretty straight forward. You can quick join a game or set up a lobby to start one of your own. Some races feature a set track or they can be set to allow the players to vote on their choice of tracks. Competition can be tough online, but it’s interesting to see the variety of cars players show up to race with. My time with multiplayer was not without its issues, though. I was regularly dropped from lobbies and it was not uncommon during races to have a number of players dropped and leave their cars sitting idly on the track. 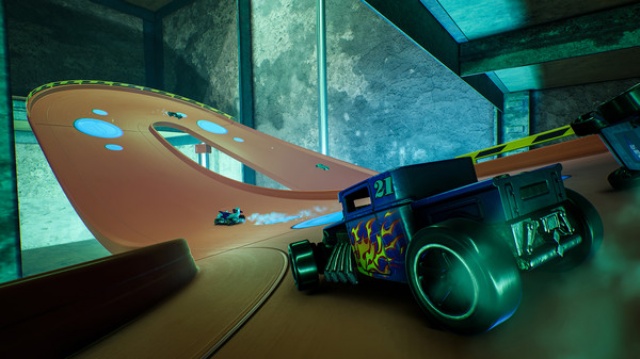 Hot Wheels Unleashed comes with an extensive livery editor that lets you customize the colors and finishes of any of your cars. If you create a paint job that you’re particularly proud of, you can rename the car and upload it. You can also browse the work of other gamers and download any of the ones that you’d like to race yourself. There’s also a functional track editor that – after a little practice – will let you build your own creations to race on. While you can use these tracks during multiplayer matches, it’s odd that there’s no mechanism in place for sharing tracks as there is for sharing paint jobs.

The game is more like an arcade title than a full-featured racer. The game is clearly focused on collecting cars and expanding your collection rather than providing an extensive and full-featured racing game experience. The arcade racing is fun in short bursts, but the blind box system can make it feel like a grind while trying to obtain the cars that you want. If you pick this game up, do it for the car collecting. Otherwise, there are more enjoyable arcade racers with more variety out there for you to play.

Final Rating: 78% - More of a car collector’s game than a full-featured arcade racer.