Madden NFL returns for another season in much the same way that it’s returned for several seasons now, with updated rosters, some new features that bring some incremental changes to the game, and a lot of what you got with the previous season. The new features take a few baby steps in the direction of moving the franchise out of the doldrums it’s been stuck in for the past several years, but those who’ve stuck with Madden NFL through the years will probably feel like they’re being told “wait until next year” one more time.

Presentation-wise it’s hard to tell Madden NFL 2022 apart from Madden NFL 2021. You get a heavy dose of this year’s co-cover athletes Tom Brady and Patrick Mahomes during the game’s long load times, but otherwise the menu system and interface are essentially the same as they were last year. It’s all rather bland, made more so by a repetitive and milquetoast licensed soundtrack. For a game that simulates such a high-energy and emotional sport, it does very little to get you pumped up to play it. And I miss the days when the game would theme the interface to your favorite team. That was certainly more exciting to me than a row of boxes containing the initials of each of the game’s modes. 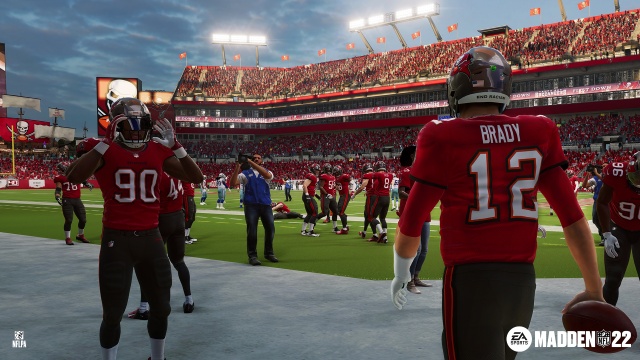 Speaking of modes, the game’s centerpiece mode is once again Ultimate Team, probably because it’s the game’s monetized mode. This is a card-collecting mode where you assemble your team from player cards you obtain by opening packs earned through gameplay, or purchased from the store with coins earned from gameplay or real money. Each player is given a rating, with starts off in the mid-60s and works its way up to 99. Players who somehow managed to survive their team’s final roster cut are the ones with their ratings set in the 60s, and when you start out in this mode your team will be entirely filled with these players. Drawing a top-tier player doesn’t usually give you a player in the 90s, though. There are plenty of variants of star player cards, some of which require you to grind your way through upgrades before they reach their full rating potential. These cards are usually only found in premium packs, although they are sometimes earnable through events during the season (at least I assume they will be again this year, I am reviewing this game when we’re only one week into the preseason). It takes a fair number of coins to get packs with a higher guaranteed minimum player rating, but all of the best packs are only purchasable through premium currency obtained for real money. If you’re going to stick with the in-game currency, you’ll also have the option of saving your coins for use in the auction house to get the players that you want, or sell some of the players that you no longer need.

Single player gameplay features series of themed challenges that range from single plays to entire games. Each usually has one or more stretch goals in addition to the basic goal. You can clear the basic objectives within a try or few with your team of NFL unknowns, but earning all of the stars for challenges will be more difficult. If you’re patient and stick to the single player game, you can eventually put together a decent enough team. It will be hard for you to break into the elite tiers of the multiplayer ranks this way, though.

The Yard mode – six-on-six short-field games that emphasize passing offense – returns this year without too many changes. There are some new venues and a ranked mode now, and progression is now integrated with the Face of the Franchise mode, but otherwise the gameplay remains the same. It’s a fun enough mode for the occasional dalliance away from the primary modes, but it’s not a mode that I felt compelled to progress through. The wide-open gameplay can be enjoyable in short bursts, but I can’t help but think that this mode needs a healthy injection of NFL Blitz style gameplay to be truly compelling.

Face of the Franchise mode in which you create a player and guide him through school, into the NFL Draft, and through a pro career also returns. This year you’ll be able to play on the other side of the ball as an option of playing as a linebacker has been added in addition to the offense skill positions. This mode is saddled with a story that is every bit as forced and trite as last year’s. EA needs to bring a professional writer onboard to handle this mode’s story next year or simply dump this entire mode in favor of a create-a-player option for the Franchise mode. In the meantime, I’d be happy enough with a create-a-player option for Franchise mode.

Franchise mode has received a number of new features this year, which it really needed since last year’s version was pretty barebones and bland. You’re still placed in charge of your NFL team of choice, set your goal for the season, and then lead your team through the entire season. Games can be simulated, but where’s the fun in that? If you’re pressed for time and don’t want to play every down there are options to just run offensive plays or to take control at critical moments of the game. This year’s new features are more focused on coaches than on players, though. There are light RPG elements in that you manage your assistant coaches’ progression in a way similar to that you would your party in an RPG. Points are earned during the season by meeting both short- and long-term goals, and you can then allocate these points to the skill trees of each of your assistant coaches. For example, you can focus on developing new players or returning your veterans back from injury faster. This adds a bit more depth to Franchise mode, but it’s not exactly a gamechanger.

Also new to Franchise is the weekly gameplan. You choose a gameplan based on your opponent and this will set your goals for a game and affect the suggested play calls that you’ll see during the game. If things aren’t going your way during the game, you’ll have the chance to adjust your gameplan at halftime. This addition adds a strategy element to each week that was missing in the past. It’s no longer a matter of simply jumping from one season game to the next. There will be additional choices you’ll face during the season, as scenario situations will present themselves and give you choices that will have you balancing the potential risks and rewards of your decisions. A scouting mode is also promised, but you’ll have to wait for an unspecified future update to try it out. 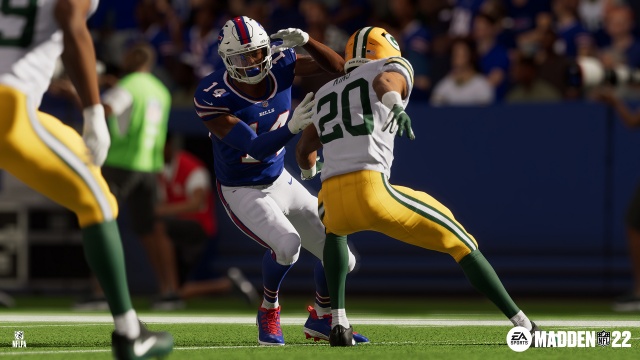 There are some improvements on the field as well. The spec sheet claims improvements to sideline catches, tackling, and blocking, but to me the only noticeable difference from the 2021 version was in the blocking, primarily during passing as the dynamics of the pocket seem to be improved to be more realistic. I didn’t notice much difference in catching and tackling, at least to the degree that it made the game feel different this year. In fact, the three tight end pass play that I went to all the time in 2021 is still as effective in 2022. By the time I played enough to write this review, I had called the play hundreds of times and averaged almost twenty yards a play with it. This to me is the current Madden cycle’s greatest shortcoming – the AI simply doesn’t adjust to your play-calling. If I complete a touchdown drive calling the exact same play four times, I’d expect the other team to shut that play down, but I never see that happening in this game. I can come out on the next drive and keep going to the well and drinking my fill.

One of the biggest additions to gameplay in the 2022 iteration of the game is the new momentum and homefield advantage system. As you make good plays – or give them up to the other team – a momentum meter across the top of the screen will move towards the team making plays. Reach set thresholds on the meter and you’ll earn game modifications that are customized for your team, and on whether or not you’re at home or on the road in the game. The modifications are too numerous to list here, but you could see anything from a tendency to break tackles to messed-up route overlays.

I like the idea behind this, but it feels like it needs further refinement. The meter is too methodical – anyone who follows the NFL knows that a key play such as an interception on a key drive can swing the momentum entirely to the other side. And while there is an attempt to have the crowd animations reflect what is going on on the field, it feels limited. The energy of a home crowd completely fired-up just isn’t there, and the complete deflation of the home crowd when the visitors turn the tide of the game is simply completely missing here.

While the game has undergone graphical improvements for the latest generation of consoles, the engine still manages to show its age. The animations are still slightly stilted and wooden, and by the 2022 iteration you’d expect them to be smooth and dynamic. The minute details are impressive, but I’d trade that for fluid motion that looked more natural in an instant.

You can certainly have fun with Madden NFL 2022, but overall the changes over 2021 feel incremental at best and show more potential than they actually deliver. My wish list for 2023 would be an NFL game that gets me as pumped-up to play it as I feel on game day, one that has an AI that actually reacts and adapts to my play-calling, and one that has animations as fluid as the real thing.

Final Rating: 69% - Incremental improvements for a franchise in need of some major improvements.