Marvel's Guardians of the Galaxy Review

Guardians of the Galaxy is its own game. Free from the restraint of being tied to the movie franchise and the need to fit into the Marvel Cinematic Universe timeline, it delivers a self-contained story that lets the Guardians be the Guardians. This is a game filled with personality, which is just what a game that stars the outsized personalities of Star-Lord, Rocket Raccoon, Drax the Destroyer, Gamora, and Groot should be. 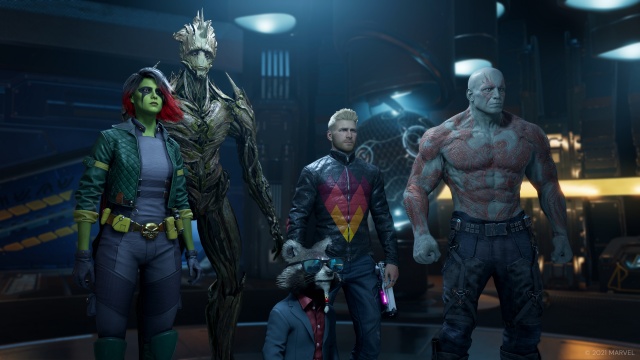 Guardians of the Galaxy plays it straight with a linear story – there’s no galaxy-spanning open world to get lost in – and it works to the game’s advantage. It would be difficult to capture what makes the Guardians of the Galaxy so much fun if the team was chasing down countless side quests and thankfully the developers made the right decision not to try. This is a Guardians of the Galaxy game, but it really belongs to Star-Lord. Not only is the story told entirely from his perspective, including playable flashbacks to his youth back on Earth, but all of the dialog choices and game decisions are left to him, or rather for you to make them for him. While these decisions have some effect on the gameplay, overall the story will inevitably lead you to where it wants to take you.

The game is very dialog heavy, as a Guardians game should be, and the banter between the Guardians during gameplay, combat, and story sequences is virtually non-stop. With that much dialog you might expect to hear the same canned phrases replayed ad nauseum over the course of the game, but that’s not the case here. There is an incredible amount of unique dialog in the game, and the writing and delivery are sharp and entertaining. Rocket is pure Rocket, but as usual Drax seems to always get the best lines.

There’s a lot less combat in the game than you’d probably expect from an action game, and you’ll spend a significant amount of the gameplay time traversing environments and solving puzzles. While you’re always in control of Star-Lord, his role as team leader gives you the ability to give commands to the other Guardians. For example, you can ask Groot to spread his limbs across a gap to create a bridge or have Drax move a large block for you. For your part, you can make use of Star-Lord’s Quad Blasters to clear out objects and debris, and as you progress through the game and earn the ability to use elemental charges with the blasters you can use them to further manipulate the environment. You’ll also face a fair number of quick-time events while adventuring, but the game is very forgiving if you mistime these, or anything else for that matter. The checkpoint system is pretty liberal with the save points, so more often than not you’ll be whisked back to the moment right before your failure and given another chance.

You’ll exclusively control Star-Lord during combat as well. Star-Lord is basically a strafe-shooter kind of guy, sometimes on foot and sometimes from the air using his jet boots. The game keeps you from simply keeping the trigger button down for the duration of a battle by adding an overheating element to the Quad Blasters. As they begin to cool-down you can perform what is essentially a timing-based quick-reload that will prevent the weapons from going into a short lockdown as well as give you a charged shot. You’re basically going to have to do all of the killing yourself because the other Guardians seem incapable of doing much damage on their own. They’re not entirely useless in a fight, though, as you can command them to use special abilities in combat. Each one is basically a specialist – Gamora is a damage-dealer, Rocket has AOE grenade attacks, Groot pins enemies down and immobilizes them, and Drax has knockback abilities. Using your team is essential to winning battles, especially to exploit enemy weaknesses that will make them more vulnerable to attack. 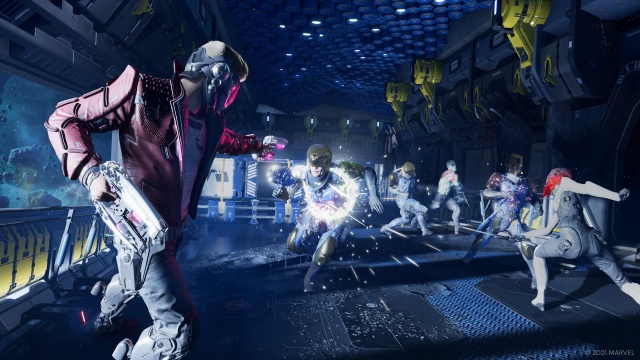 Successful attacks will also build your Huddle Meter. Fill it and pressing the bumpers enables the game’s rather unique Huddle Up feature. You’ll gather up your team and listen to their concerns about how the battle is going. You’ll then be given a choice of what to say to the team. Pick the right choice and you’ll give them a pep talk and your team will receive a damage boost. The right choice is pretty obvious, but if you do manage to choose incorrectly and you’ll still earn a smaller boost limited to Star-Lord.

Battles are pretty chaotic - even with target lock it can be a little difficult to target the right enemy with the right Guardian attack to take advantage of its weakness. On more than one occasion I felt that I achieved success merely by spamming the enemies with Guardian attacks as soon as their cooldowns expired and relentlessly firing my Quad Blasters. Still there were plenty of times when everything clicked and I got my team to expose an enemy vulnerability that I could take advantage of. There are some cool features at work here in the combat engine, I just wish that it didn’t often feel like it was devolving into attack spamming.

There are some light progression elements to the game. Star-Lord’s abilities can be enhanced by finding crafting materials in the environment (they are found in little piles, no need to harvest anything). When you come across a workbench, Rocket can turn those materials into upgrades. Nothing is locked and you can pick whatever upgrade that you want as long as you have the materials for it. You also accumulate what is essentially team experience, and when you level-up you earn points that can be used to purchase additional special attacks for the Guardians – each one has three additional attacks to unlock. 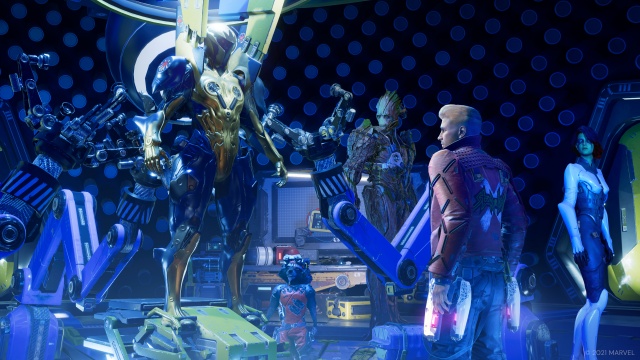 The game’s locations and environments are imaginative and fantastic – the development team’s creative director and art team deserve a lot of credit for their work here. Likewise, the bizarre menagerie of monsters you’ll face are very creative and unique. The game’s licensed soundtrack also deserves mention, although it is drawn from 80s music rather than the 70s soundtrack from the films. Perhaps the intervening seven years between the first Guardians movie and the game’s release in 2021 warranted moving Peter’s formative years forward seven years as well. But the really cool thing about the soundtrack is not simply that it has a lot of great licensed tracks, it’s the gameplay moment that each track is paired with. The sound team behind this game definitely has a good sense of humor.

It will take you a couple of weeks of casual play or a week of longer dedicated play time to get through Guardians of the Galaxy. This runtime is perfect. You get plenty of entertainment for your money and can experience the full story without the need to devote a couple of work week’s worth of time to the game. Also, there’s no monetization in the game, no needless multiplayer content, or anything superfluous – it’s all about the story experience. This type of game is far too rare these days, at least in the realm of AAA titles.

Final Rating: 88% - An enjoyable romp through space with the galaxy’s favorite antiheroes.