GhostWire: Tokyo opens with an accident at the city’s famed Shibuya Scramble Crossing, but that tragedy is soon dwarfed by an even greater one. A mysterious fog rolls through Shibuya and those caught in it disappear, leaving their clothes and anything they were carrying behind. While this is happening, a dark smoke trail whips through the intersection, locates the body of one of the accident’s victims, and inhabits it. This proves to be a surprise to both the possessor and the possessed, the former thinking it found a dead body to make its own and the latter awakening after an accident to find another voice in his head. The victim is Akito, and he’s the real protagonist of the story, both because it’s his body you’ll be controlling throughout the game and because you’ll slowly discover what has happened to Tokyo along with him. The spirit inhabiting Akito is KK, and while at first Akito fears that he’s been possessed by a malicious demon, he soon comes to learn that KK is the best chance Tokyo has to fight the power behind the tragedy and restore the lost to their physical form. 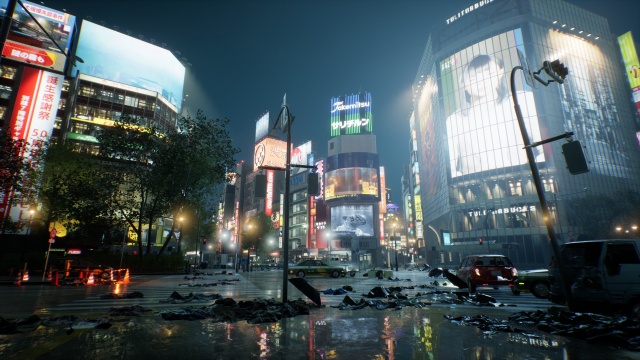 Ghostwire: Tokyo takes place in modern Tokyo, but the spirits and demons that have taken over are drawn from or inspired by Japanese folklore. In addition to the traditional spirits you’ll face, you’ll spend a lot of time battling faceless spirits drawn from those in Japanese society who’ve lived unfulfilled lives. The tie to folklore extends beyond the enemies you’ll face, though. The food and drink you’ll consume to restore health include a wide variety of Japanese snacks and cuisine and the shops have all been overtaken by nekomata, friendly cat spirits with two tails. The game doesn’t assume that you know the difference between a shikigami and a tengu, though, and each time you encounter a new spirit, enemy, type of food, or any other cultural item an entry will be added to game’s database. The database entries are more than just a list; they give you a nice amount of background information. I loved that the game did this – each time I saw the notification that a new entry had been made to the database I eagerly jumped into it to read the description and learn a little bit more about Japanese culture. I will definitely seek out a few of the food items next time I’m in LA’s Little Tokyo district based on their descriptions.

So what’s the gameplay like? The game takes place in a recreation of Tokyo’s Shibuya district. It’s an open world environment that allows you to pursue the next story mission, take on side missions, or simply explore the backways for bonus items or unique collectibles. Unlike other open world games set in an urban environment, though, there are no people or traffic or signs of life. Since everyone has been absconded, you’ll be walking alone through a literal ghost town. The area available to you will be constrained by the deadly fog – if you wander into it and remain for too long it will kill you – but you can push back the fog by clearing the corruption from tori, traditional Japanese gates that usually mark the entrance to a shrine. You’re not confined to the streets, though. Many of Shibuya’s larger buildings contain interior locations and multiple floors, and you can also access the rooftops by grappling onto the winged tengu you’ll see flying above the streets of Shibuya and taking an express ride to the top. There’s a lot to discover in Shibuya, and while you certainly don’t have to take the time to explore it all to complete the game, completionists will find plenty here to keep them busy for quite some time.

As you walk the streets of Shibuya, you’ll often encounter groups of spirits. There’s a stealth aspect to the game in that you’ll get color-coded directional warnings informing you that a spirit is detecting your presence. If they notice you, they will instantly attack, along with all of the other nearby spirits, so it pays to be a little cautious. If you stay crouched and maneuver your way behind a spirit unnoticed, you’ll have the opportunity to make an instant kill without alerting other nearby spirits. If you’re unfortunate enough to find yourself attracting the attention of a spirit parade, you’ll find yourself transported to the spirit realm where you’ll face multiple waves of attackers in an arena-style battle.

Should you find yourself fighting spirits, you’ll (eventually) have four attacks at your disposal as well as a melee strike. Three are elemental attacks – wind, water, and fire – and the last is a more conventional bow and arrow attack. All elemental attacks are ranged, the difference between them being the type of projectile unleashed. The wind attack is your basic, go-to attack, with projectiles that do moderate damage to all enemies, but don’t have much penetration through obstacles or blocks. Water attacks are more useful when you find a number of enemies too close to you and you need to create some space. The fire attacks are the most powerful, and the projectiles can pierce through multiple enemies and create explosions on final impact. All of these attacks can be charged before they are unleashed, although it takes a little time to do so and if you’re hit before you can unleash your attack it will be interrupted. Charged attacks can make a difference in a fight, though, as they both hit harder and can unleash multiple projectiles in a single shot. All of these elemental attacks require what amounts to ammunition, and as you’d expect you will have a larger maximum number of air attacks than you will water attacks and in turn fire attacks. You can recharge this ammunition in various ways such as defeating enemies or finding and breaking spirit-infused objects. The bow attacks are pretty powerful, especially when charged, but you’re dealing with a limited quiver and arrows are harder to come by than the elemental charges. Melee attacks are the weakest of all, but they can be upgraded to generate health or elemental ammo on impact. All attacks have a chance to weaken enemies to the point that their core becomes exposed. When this happens you can attempt to extract it, even from a distance, to instantly kill the enemy. Like the charged attacks, it takes some time to extract a core and if you’re hit the extraction becomes interrupted and the spirit recovers. 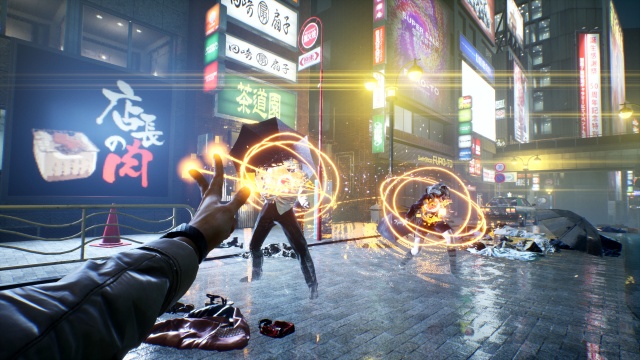 Battles in the game tend to play out as circle-strafe affairs as it’s best to keep enemies at a distance, and enough of a distance to allow you to safely charge attacks and extract cores. As such, before long battles against the core group of enemies tend to become a bit monotonous. At times it felt like the enemies in some places were there just to add more battles to the game, and I found myself sometimes wishing I could skip some of the fights so that I could just go back to exploring the city.

One of the other primary activities in the game is collecting the souls of those who’ve been released from their bodies by the fog. You’ll find them clustered in ethereal blue clouds and when you do you can collect the souls into any katashiro (traditional Japanese paper dolls) you have available. These can only contain so many souls, so once you can no longer carry any more, you’ll need to upload them to KK’s mysterious compatriot Ed via a payphone. It’s worth it to go through the process, though, because uploading the souls leads to significant experience gains and is one of the best ways to level-up quickly in the game. There are a significant number of souls to find in the game, and you could spend hours upon hours looking through all of the alleyways in the city or trying to figure out how to get from one rooftop to the next. Again, you can spend a little extra time doing this to try and boost your XP, or you can spend the time to try to find every last soul to save.

When you do reach a new experience level, you will earn points to spend on upgrades to things like your elemental powers or to enhance your abilities so that you can extract cores or absorb souls faster. Everything is on its own track in the game, so you don’t have to make any decisions that will lock out any potential future upgrades depending on the path that you’ve chosen. This also means that there’s not really any specialization paths in the game – you’re really just picking the boosts that you think will help you out the most. Some paths will be blocked from further progression until you spend a special currency to unlock the next advancement. This currency is hard to come by, so you will make it harder on yourself to unlock some paths when you choose to unlock another one first. 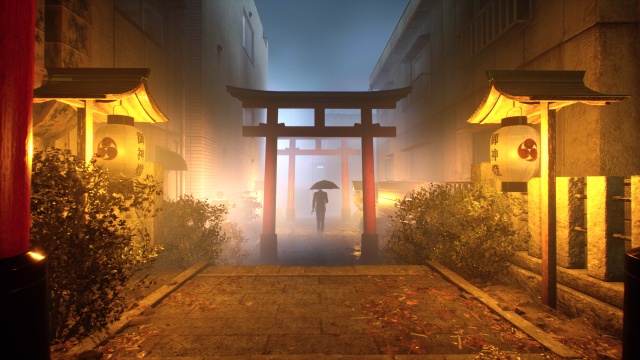 While there is some fun to be had exploring the city, I found that I enjoyed the game the most while pursuing the story and side missions. This really is a narrative-driven game in that discovering the reason for the fog and who’s behind it, as well as partaking in the side missions and learning more about Japanese folklore and religion, is more interesting than collecting hidden items and collecting souls. While part of me wanted to push ahead from one story mission and objective to the next, I found it impossible to resist completing the side missions – not so much so that I could benefit from the mission rewards, but because I found them fascinating from a narrative perspective.

If you’re looking for Ghostwire: Tokyo to be a horror game experience, you may be disappointed. I can’t really say that it’s a game that provides any truly scary or horrific moments. It’s more of a supernatural thriller – there are surreal sequences and a general feeling of suspense to the game. You’ll be more compelled to move forward to discover what is happening than you will feel that you have to push yourself forward despite your fears. Personally, I enjoyed my time with Ghostwire: Tokyo and looked forward to playing it each time, while with horror games I find that I need to be in the right mood to play and sometimes feel like I don’t need the stress that can come from those types of games. I do wish that the battles didn’t feel so repetitive, but I was willing to put up with them because everything else was so compelling to me. If that sounds like something that you’d enjoy as well, you should give Ghostwire: Tokyo a try.

Final Rating: 80% - A compelling story steeped in Japanese folklore is enough to overcome the repetitive battles.