I'm a seriously hardcore Pokemon fan. I've collected the entire Living Dex (all 720 species, U.S. region and no nicknames) and I'm super excited to add to the total with Sun and Moon in November. Usually the Pokemon vs. Digimon fight is about as intense as the Apple/Android debate, but the monster collecting divide dug trenches and inspired anger way before the iPhone even existed. Until a few years ago, I was completely in the Pokemon camp. It wasn't until I was assigned reviews for the Digimon DVD box sets that I saw Digimon's high points; the show was excellent and even managed to divide my loyalty. Digimon Story: Cyber Sleuth is the first franchise game I've had the pleasure to review since becoming an honest to goodness fan. In case you don't feel like reading, I'll give you the TL;DR: After finishing the game, I believe I'm an even bigger fan of the series. Aside from one or two minor hiccups, Digimon Story: Cyber Sleuth is the Digimon game I never knew I wanted.

Cyber Sleuth's plot borrows from other properties pretty liberally, but the mashup of the plots of Sword Art Online, Soul Hackers and a bunch more actually works. The game focuses on an online MMO/life simulator called EDEN. A hacker gives you a piece of code that allows you to capture Digimon. This unsolicited gift is the start of your troubles, as you are immediately attacked by a malevolent force called Eater. The battle separates your mind in the game from your body, effectively trapping you in the virtual world. You soon take up with the Cyber Sleuths, led by the embarrassingly chesty and scantily clad Kyoko. From there, you become involved in all sorts of mysteries and before long, in true JRPG fashion, the fate of the world rests on your shoulders. The plot moves quickly enough and, for the most part, the characters are endearing, but what will catch a lot of players unaware is the more mature themes sprinkled into the story. Like the show I loved so much, there is a lot more emotional depth here than simply being another monster collecting game. It's this lack of pandering to younger audiences that really turned me on to Digimon, and this game represents that quite nicely. 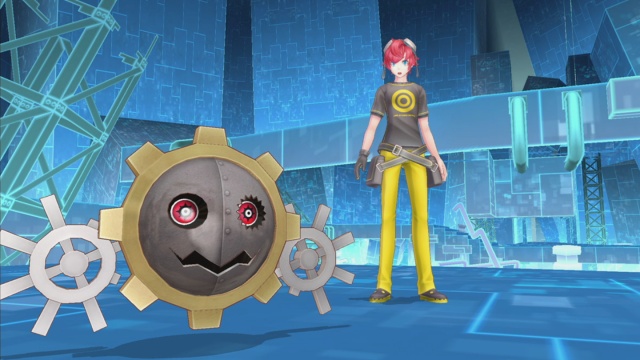 Overall the presentation in Cyber Sleuth is very good. I'm not sure it is the prettiest PS4 game I've played, but it is colorful and well-detailed. But the pleasant, inoffensive graphics and visuals aren't what I want to focus on; rather, I'd like to applaud the developers for their choices in the voice over department. The game is entirely voiced in Japanese (with English subtitles, of course) and there is no English voice track to be found. Hammy English voice over actors have ruined more than one game over the years, so it's quite refreshing to see a game stick with the original Japanese. Is this a pro for everyone? No, but coming off watching the Parasyte anime in both original Japanese and with an English dub, I'm ready to swear off English voice acting in Japanese properties altogether. No matter your view, there can be no doubt the Japanese actors do an amazing job, and I wonder if I would have such high praise if the game was peppered with squeaky pseudo-anime English voice acting.

Like most monster collecting games, you'll be spending a lot of time in battle. Thankfully, this is where the game truly shines. Yes, the encounters are random, an RPG trope that should have died off decades ago, but like Pokemon, there is still a certain thrill to be had by discovering that highly sought after Digimon you've been looking for. The battles themselves play a lot like Pokemon, with four elements making up the rock-paper-scissors strengths and weaknesses. It's a tried and true RPG battle system and it works just as well here as it has in dozens of other games. What really impresses is how your Digimon can evolve. Just like Pokemon, experience in battle levels up your team of captured Digimon, and higher levels lead to more powerful evolutions. Here's the catch - Digimon can de-evolve, i.e. revert to a previous form. Doing so resets the Digimon's level to one, but all kinds of bonuses are granted by doing so. So, if you have an evolved Digimon and go backwards, when you are ready to evolve again that Digimon will be significantly stronger and better suited to battle. This wrinkle introduces a level of team-building strategy almost unheard of in Pokemon, and I absolutely loved it. Even after finishing the main story, I am still trying to see and capture all the Digimon, and I believe my save file is at about 90 hours, with just a handful more to go.

That said, Cyber Sleuth handles the challenge perfectly. It possible to plow through the game with almost zero time spent level grinding, but doing so certainly does have its advantages. That is probably an extremely difficult thing to balance from a developers' standpoint, but Cyber Sleuth knocks it out of the park; it's a game everyone can play and finish, but it also holds a ton of depth and challenge for those willing to seek it out. 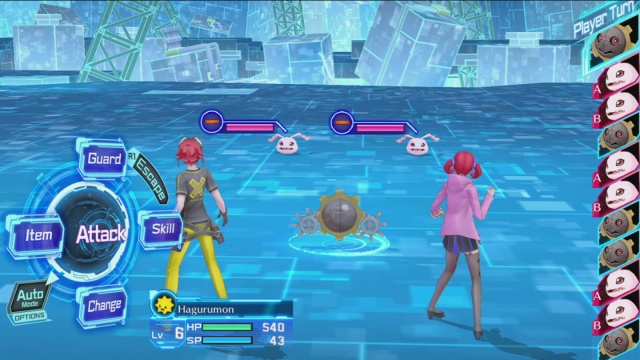 Full disclosure time, people: While I started my review code for the game on the PS4, I ended up purchasing the Vita version for myself and played through it on the portable. The PS4 version is truly excellent, don't get me wrong, but to me, this type of game is MUCH more suited to a portable console. With the Vita version, I could fight a few battles during class change or lunch and pick up for longer sessions at home later. On the PS4, there is no such thing as pick up and play; you turn it on, wait for loading, etc. With the Vita version, a tap of a button brings the game out of sleep mode, ready to rock and roll in a matter of seconds. Cyber Sleuth on the Vita is a portable masterpiece, but on the PS4 it feels like a handheld game masquerading as a console one (the last game to do this was the also excellent Akiba's Trip). For my money, the Vita version is the way to go.

Digimon Story: Cyber Sleuth took me by surprise the same way the Digimon TV show did a little while back. The evolution/de-evolution mechanic, the Japanese voice track and the surprisingly mature and deep storyline were my favorite aspects, but the game really has almost no weakness or faults. It is a perfectly balanced and engaging monster collecting game, and I wonder, when the dust settles from Pokemon Sun and Moon in November, which will be the best genre game of 2016. A few years ago, Pokemon would have been the easier answer, but after experiencing Cyber Sleuth, Nintendo has a lot of ground to gain. Definitely add Cyber Sleuth to your shopping list, but if you have a Vita, that's where you will want for it to call home.