Along the eastern plains of Gaia lies the city of Midgar. Here, megacorporation Shinra is draining the lifeforce of the planet dry, and the plants are withering away. We then cut to a glimpse of hope - a flower girl in a dark alleyway looking at a broken valve releasing spirit energy. As the camera pushes back, we get to see the metropolis's vast expanse and the 'Mako' reactors that tower above all. Then, the camera kinetically pulls us back to a train violently grinding to a halt, and soon a plot to blow up one of these reactors begins. This is the brilliant opening of Final Fantasy VII Remake, a reimagining of the 1997 JRPG masterpiece. The first of an episodic format, this remake reaches unimaginable heights that often go above and beyond the original.

The plot follows Cloud, a former soldier-turned-mercenary. He is hired by Avalanche, an insurgent group looking to take down the multinational enterprise Shinra for their exploitation of the world's primary energy source, Mako. Although initially cold at anything but a paycheck, he gradually becomes more involved with the group's exploits. Cloud also has bouts of strange visions that he will slowly come to understand. With the help of his childhood friend Tifa, Avalanche leader Barret, and a mysterious florist named Aerith, he will go on a journey of both self-discovery and towards stopping Shinra.

Final Fantasy VII Remake takes the first nine hours of the original and transforms it into a 40-hour game. As such, the whole game is based in Midgar, an iconic and imaginative location that we all wanted to see expanded upon. Not only that, but we get to see the rest of the Avalanche crew become fully fleshed out. While Biggs, Wedge, and Jessie were given brief but pivotal roles in Final Fantasy VII, they are now a significant part of the adventure. It is impressive to watch how the writers have transformed these secondary characters into mainstays of this entry, especially Jessie. She is a joyous inclusion to the story - and the whole team's newfound depth is a prime example of how any plot beat can be refined and amplified. 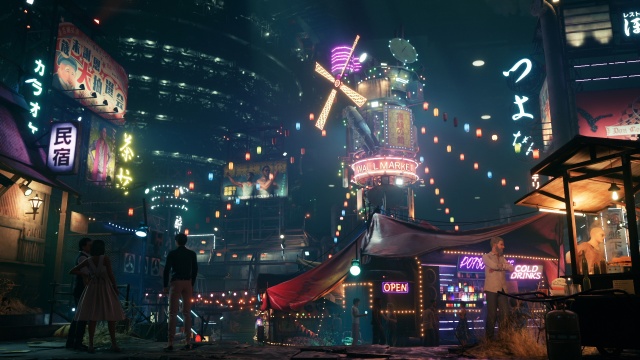 The older Final Fantasy entries are known for their turn-based format, but this remake takes a more modern action-RPG approach. In turn, this is the most exciting gameplay you can find in a Final Fantasy game. Combat is real-time; attacks respond as soon as you initiate them, and the flow of fights is incredibly dynamic. Battles never descend into mindless button-mashing because the distinctive tactical flair of older titles is still here. Pressing X will take you to the 'Commands Menu,' which has options for abilities, spells, and items. Opening this up slows down time and allows you to carefully decide on what attacks to use against specific enemies, or specific consumables to use. The 'ATB (or Active Time Battle)' gauge is what allows the use of a command. It fills passively and with each attack, with two bars to be filled. This limitation encourages an offensive approach, which really propels the rhythm of each battle.

You will never feel bored in combat. Every character plays completely different, and each has their own unique ability. For example, Cloud's specialty is the 'Punisher Mode,' a fighting style that favors massive damage with slow movement, much different from his well-rounded 'Operator Mode.' Barret, on the other mechanized hand, is a primarily ranged character because of his minigun arm. His special ability is the 'Overcharge,' which delivers a powerful blast once fully charged, as well as an ATB gauge fill-up. Diversely, Tifa is an agile and technical fighter who throws fast blows in quick succession. She has three unique abilities that are accessed by increasing her 'chi level.' And finally, Aerith is a mage type who deals ranged damage and can release 'Tempest,' a magical attack which can be more potent if more energy is charged up. All-in-all, there is never a dull moment with your party as you battle a variety of monsters, Shinra goons, and machines in exhilarating and diverse playstyles. 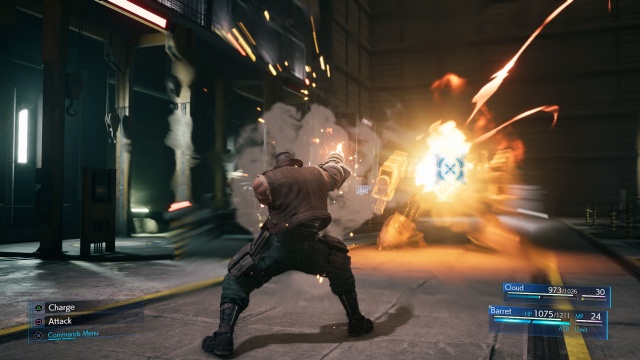 Progression is a pleasure. Besides leveling up characters automatically with EXP, your weapons can also do this in their own way in the form of 'Proficiency.' As you gain new swords, gloves, guns, and staff sticks, they will each bring with them a newfound ability to harness. If you use the move enough, it will unlock, which can then be used with other weapons. Weaponry can also be upgraded through an intuitive system called the 'SP (or skill point) Pool.' Here, you spend these points on enhancements such as stat boosts and more 'Materia' slots. Materia is essential for gaining access to new spells, stat buffs, and summons to assist you in battle. They can also be leveled-up by using them - increasing their potency through 'AP (or Ability Points).'

The first act that takes place within Midgar might be my favorite act of Final Fantasy VII, so to see it fully rendered and realized in modern technology is a sight to behold. Vistas of the city are breathtaking and make you feel like you are small in this smokestack megalopolis. And just like the original, the creators utilize Midgar's pizza-like and closed-off structure to provide a visual and thematic dichotomy. A caliginous color palette accentuates the hollowness of the topside neighborhoods where the privileged live. On the other hand, the slums that are situated beneath the upper plate are portrayed in sparse sunlight. As you are roaming in these impoverished areas, sunlight may occasionally seep its way through the "steel sky," signifying hope in a beautifully artistic way. The city's inhabitants are also given new life - everyone going about their daily routine around you makes every neighborhood feel lived-in. You can also go up to a group of citizens and listen to their dialogue, which serves as commentaries on the current story situation or just simple everyday conversations.

While in the slum sections, you can not only browse shops but also accept a variety of quests. These can range from simple fetching to monster-killing tasks. Upon completion, you are rewarded with an item or some glorious 'Gil (money.)' It seems poetic that the remake of an incredibly influential RPG went full circle by taking inspiration from the Western RPGs that were shaped by Final Fantasy VII, to begin with. Consequently, questing is like playing a lite version of Horizon: Zero Dawn or even Final Fantasy XV. However, the sophisticated and dense storytelling you would expect from side quests is not found here. Instead, these side undertakings are humble and often humorous. Either way, they are still a ton of fun to complete. There are also passive tasks to achieve in the form of 'Battle Intel.' These are given by a young scholar named Chadley, who will grant you access to buying new materia upon completion of said requirements.

Unsurprisingly, exploration works well too. In keeping with its Western influences, there's a Skyrim-esque compass that'll guide you towards the path of your quests. If that isn't your cup of tea, you can switch that up to a mini-map or turn off all maps completely. Exploring an area inside and out is ideal since there are substantial secrets to find. Places that are cut off or require a special interaction appear as 'Discoveries,' which can yield satisfying pay-offs like new Materia or a trophy unlock. Scattered throughout are also chests and crates, which can hold new weapons, accessories, potions, and 'Moogle Medals.' The last of these is a type of currency that can be traded in for items. And lastly, there are the magnificent music discs, which can be found by buying at Vending Machines, Merchants, and in other ways. You can then pop in one of these records in a Jukebox, and it will play either mini jazz, classical, or electronic renditions of your favorite tracks. Speaking of the score... 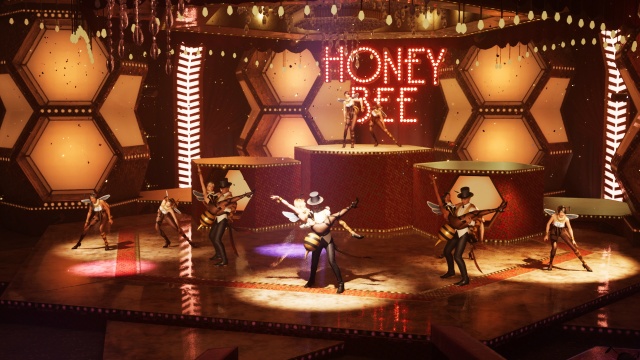 The composer of Final Fantasy VII, Nobuo Uematsu, returns to rescore his musical magnum opus. His new score manages to strike the perfect balance between the electronic sequencer chords of the original and full-on symphonic orchestral arrangements. The result is a stirring synthesis that still succeeds in invoking the same poignant emotional impact felt by listening to the 1997 version. Tracks like 'Flowers Blooming in the Church' and the main theme can still make you choke up every time. New and old songs alike leave a powerful impression with utterly elegant string sections and sweeping harmonies. On top of it all, the battle music is implemented with a stem-like system that dynamically evolves arrangement while in combat, matching the fast-paced flow. Overall, this nearly matches Final Fantasy VII as having one of the most exceptional JRPG scores there is.

Like the score, the original producer-director team is back to reshape their masterpiece for a modern age. Rewriting scenes that were meant to be read and not voiced is a gargantuan task. Thankfully, most veteran players will be pleased with the results. Iconic scenes are treated with the utmost faithfulness and sublimity and are sometimes even more well-executed. Final Fantasy VII was a truly cinematic experience, and this eighth-generation version took this aspect to another level. Dialogue is now more natural, camera angles are deliberate, and character expression is subtle. The seamless translation of the iconic cast is also evident. These characters are truly timeless - a testament to earnest storytelling. Cloud is now more layered than ever; his gradual growth is like a coming-of-age story. And in my humble opinion, Aerith still remains as one of the greatest heroines of all-time. She is innocence incarnate - a guiding beacon for Cloud's journey of self-discovery. The subtext is timely, too, offering an earnest commentary on themes of grief, class relations, and what it means to be a hero.

Final Fantasy VII Remake is an astounding achievement. It is an unprecedented gathering of the creative minds behind the original, for which they succeeded in every way in their goal to bring their vision to gamers of today. This remake has ushered in a new era - a saga that will change the gaming landscape as we know it. For now, though, Final Fantasy VII Remake alone stands as one of the greatest modern RPGs ever made, remake or not.

Final Rating: 98% - A truly sweeping first entry epic that exceeds all expectations and then some. The best remake ever? You better believe it.