There isn't even a pause of hesitation in my thought process when I say that Darksiders and Darksiders II were two of my favorite games of the last console generation. Both action adventure titles borrowed heavily from other games in constructing their individual experiences, but everything melded so well that the God of War meets Legend of Zelda (meets Diablo III for part two) gameplay hoisted both titles to the top of my all-time favorites list. But that was a few years ago, and the downfall of THQ, the Darksiders' license-holder, all but ensured we'd never see parts three and four of the story. Nordic Games has since picked up the Darksiders rights, and are releasing a remastered version of part two to gauge interest before possibly beginning work on the final two needed and hotly anticipated sequels. If you're like me, you'll lay down the cash for the Deathinitive Edition of Darksiders II, less because of the game itself, but to add fuel to the sequel fire. Given that players have better options than this if they wish to play the series, though, it's a little tougher to give this remaster a winning score.

Author's Note: Since the game is all but identical to its PS3 counterpart, I'll link to my original review HERE if you are interested. This review will focus on the improvements made to the already amazing game, and the value of this particular release.

The first major change you'll notice with this release is the 1080p graphical upgrade. Death's adventure looked fantastic the first time around on PS3 (thanks, in no small part to acclaimed artist and personal favorite Joe Madureira's art and character design), and it looks even better on the PS4. If you've played any recent re-releases of games from last gen, though, you know that the visual upgrade is nothing like it would be if the game were even older. The PS3 had the power to bring some amazing sights to life, and the PS4's upgrade isn't as earth-shattering as, say the Gamecube to Wii U upgrade of The Legend of Zelda: The Wind Waker. The biggest change is more in the framerate category. The PS3 version did suffer some slowdown during some of the most intense and populated battles, but you won't find any of that here; the game runs super smooth from beginning to end. 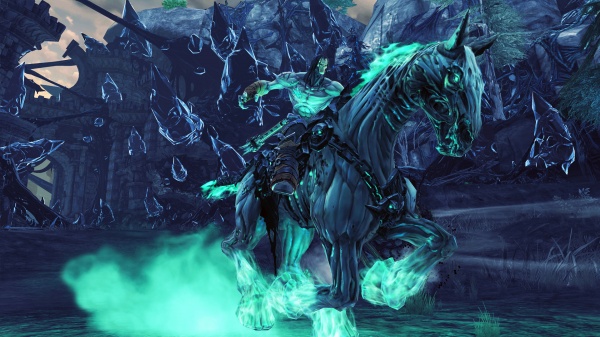 The other selling point of the Deathinitive Edition is the inclusion of all the DLC from the original release. Seeing as some of the original DLC was tied to a certain retailer or edition of the game (the specifics evade my memory, but I do remember purchasing a code from eBay to get either an exclusive set of armor or weapon), it's nice to see it all in one place here. The special DLC weapons and armor are incidental, though; they are decent enough but you'll have collected far better gear by the game's halfway point. Luckily, the included DLC also contains the three dungeons/quests, Argul's Tomb, The Demon Lord Belial and The Abyssal Forge. All three are worked seamlessly into the main game, and each offers about 1-2 hours of added action. For me, the more Darksiders, the better, so playing through these was essential, and if you like the overall game, you'll enjoy these added areas and the quests that come with them.

I'll level with you: I need to play Darksiders III and IV, and when you need something, that's a responsibility (name that quote!). That's why I not only purchased this game for myself, in addition to getting a code to use for the purposes of this review. The better graphics and framerate are OK, but considering that is all the Deathinitive Edition has to offer beyond the already-released Darksiders Collection, it makes it a tough recommendation. If you've only got a PS4 (or Xbox One) and never played Darksiders II, by all means, go get this game. But if you've already played it or have access to a PS3 or Xbox 360, there is a much more sensible and feature-packed version already out there. Let's all just hope that enough people fall into the first category and we finally get to see the adventures of the last two horsemen in parts three and four.

Final Rating: 70% - Unfortunately the best Darksiders collection can still be found on the last generation of consoles.