Poor Harrison. He's the hard-working type, going about his job of repairing deep space relays without complaint, companionship, or anybody really noticing, the latter of which proves to be quite a problem when his ship meets with an unfortunate accident while he's working on one of those relays. Stranded in space with no way to contact anybody for help, he decides to face his fate head-on rather than wait it out. With a few impromptu modifications to his space suit, he heads out into space traveling Iron Man style past asteroids, planets, and other space objects. He's alone, but not unobserved, as a robotic probe with a bored but bemused AI begins to take a liking to him. Perhaps his unwavering resolve and a little robotic help may just be enough to save Harrison after all.

Lost Orbit is essentially an arcade racer in which the primary goal of each stage is to get Harrison to its finish line in one piece and as quickly as possible. You can bank Harrison to the left or right with the left stick, and provide him with a boost from his suit's thrusters with the press of a button. The controls are pretty tight and so take a touch getting used to, but once you do you'll appreciate their responsiveness in the game's latter stages. If you keep banking you can turn in tight circles or reverse direction, which can be a little tricky since while flying towards the bottom of the screen moving the stick to the right will cause Harrison to bank right from his perspective and thus move left across the screen. If you've ever flown a remote control plane or helicopter, then you'll be familiar with the kind of mental switch that you need to make with the controls when it is flying towards you. You'll also need to get used to the game's horizontal wrapping that has you appearing on the opposite side of the screen if you fly off an edge. This is an important maneuver if you want to stay alive, but you'll need to make sure that you don't wrap yourself into an obstacle on the other side of the screen. The game gives you a little guidance with this, though, in the form of a line indicating where you'll enter the other side of the screen and the angle at which you will do so. 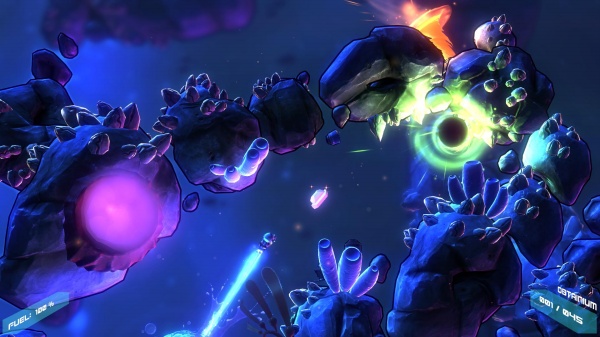 At first completing a level is simply a matter of avoiding running into asteroids, but the game continually introduces new elements that increase both the challenge and the pace of the game. Lost Orbit likes to play with gravity, tossing little planets, pulsar stars, wormholes, and other interstellar objects into your path that all have some sort of impact on your momentum and trajectory. You can enter into orbit around a planet and then use its gravity to slingshot you forward at breakneck speed or bounce from pulsar to pulsar like a cosmic pinball. It's certainly exciting when you manage to string a few of these maneuvers together and go hurtling through space in a way that is sure to invoke fond memories in anyone that's played classic Sonic games before.

But it's not all fun and games, space is a dangerous place. It's not just the rocks and space junk that sit blocking your way or that march across the screen in their own gravitational dances and processions, other hazards exist as well. Things like automated mining machinery or aliens with bad temperaments provide a constant danger to Harrison, as does the possibility of flaming out in a planet's atmosphere if you come in too hot to slip into orbit. Each mistake earns you a humorous death animation and a quick trip back to the last checkpoint, which isn't usually too far away.

While you're making your way to the end of a level, you also have the goal of collecting the "obtanium" crystals that float though space or orbit planets. The reason for collecting these is twofold, the first of which is that your overall rating for the level will depend on the percentage of the level's crystals that you manage to collect. The other reason is that the crystals serve as the game's currency for purchasing suit upgrades, allowing you to unlock new maneuvers such as braking and barrel rolls, improve your capabilities such as your maximum speed, and even giving you access to a bomb that can be used to clear debris from your path in an emergency. There aren't a lot of available upgrades, but many of them can be leveled up after their initial purchase. Oddly enough the game doesn't bother to tell you how to use any of the upgrades when you purchase them, so after you do you'll need to push buttons and pull triggers until you see something happen. 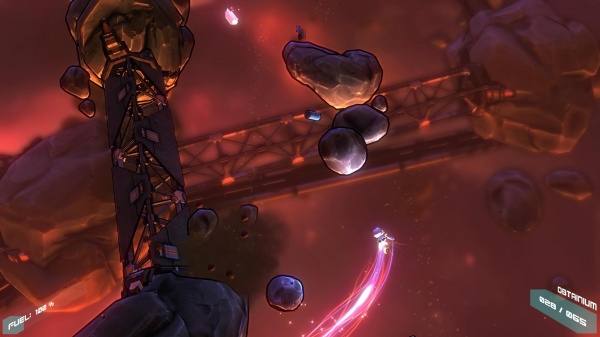 When you reach the end of a level you'll be given an overall rating that depends on factors such as your completion time and number of deaths along the way. You can repeat the levels in an effort to earn a "platinum" rating or improve your time so that you can move up the leaderboard. If that's your sort of thing, you'll be mildly annoyed that you'll have to listen to the robotic AI's musings that serve as the story's narration each time that you play a level. It's not that they are bad - I actually quite enjoyed them - it's that it quickly becomes repetitive to hear the same lines over and over again when you're making repeat speed runs on a level, especially since there usually isn't anything happening game-wise during the voiceovers. If you're not into improving rankings or making repeated speed runs, then your time with Lost Orbit will be relatively short. You'll get a few hours of enjoyment out of it and then that will be that. Overall, it's a relatively short game.

Either way you approach the game, Lost Orbit is an enjoyable game. Although things can get a little crazy with all of the gravitational hijinks as you zip through space, the game is not punishing to casual gamers. The game's liberal checkpoints and its "everybody who crosses the finish line is a winner" philosophy ensures that no one will find themselves blocked from further progress because they can't 'medal' a level that they're struggling with. On the other hand, those who enjoy a challenge will find it in trying to earn a platinum rating on every level or in pushing to shave seconds off of their run times.