Wolfenstein: The Old Blood serves as both a standalone expansion to Wolfenstein: The New Order and a prequel to its story, so on both counts ownership of The New Order is not at all necessary to purchase and enjoy The Old Blood on its own. While The New Order took place in an alternate timeline in which Nazis used an overwhelming advantage in futuristic weapons technology to win World War II, in The Old Blood the Nazis are merely on the cusp of delivering their final blows to the Allied cause. You once again fill the big boots of William "B.J." Blazkowicz, probably the most overt of covert operatives in the US Army, as he attempts to infiltrate the infamous Castle Wolfenstein itself. What is initially a mission to steal some secret documents soon turns into a rescue operation and escape attempt when his plans are thwarted by the sadistic commander of the garrison at the castle, Rudi Jager. The documents in question belong to Helga von Schabbs, an archeologist with a strong interest in the occult and no aversion to dabbling in things that should probably be left alone, and the second part of the game has you in pursuit of von Schabbs in the midst of a zombie outbreak she's unwittingly unleashed. Now if that all sounds almost like two different games, well, you're basically right. The single expansion was originally planned to be two, and so The Old Blood is divided into two acts, "Rudi Jager and the Den of Wolves" and "The Dark Secrets of Helga von Schabbs". Far be it for me to complain about getting twice the content in a single download, but there is a somewhat jarring shift in the nature of the game once you start getting into the meat of Dark Secrets.

The gameplay in Act One will feel familiar to anyone who's played The New Order. It's still best to rely on stealth and silently thin the ranks of nearby soldiers with melee takedowns and shots from a silenced pistol, paying close attention to eliminating commanders before they can raise the alarm and bring a flood of troops bearing down on you. It's hard to keep track of everyone, so inevitably firefights will erupt when you're spotted. The variety of weapons at your disposal and the smarter than average enemy AI make these battles enjoyable and challenging enough. The advanced super soldiers and the heavy armor and powerful weapons that they use make for even more challenging mini boss style fights when you encounter one of them, something that happens with increasing frequency the farther you make it into the game. 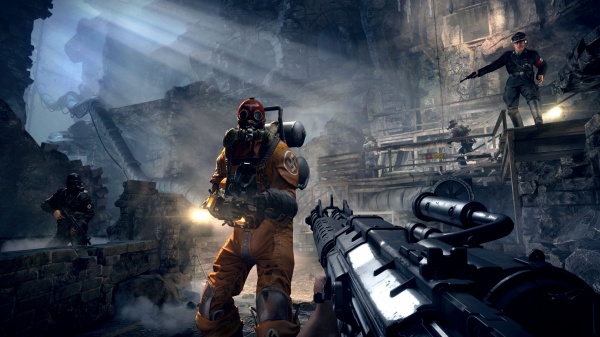 However, there's a difference between a downloadable game and a full release, and that's that there's less of a story here, which means a minimum of cutscenes, simpler objectives, and a focus on pushing through to the current level's exit. As such, Act One begins to feel more and more like an arena shooter as you press on - one prolonged firefight after another as you clear an area of soldiers, head down a passageway, and then enter the next area full of soldiers. The game's stealth element breaks things up a little bit, but there are plenty of times when things begin to feel like a grind. On more than one occasion I walked from one battle right into another and immediately thought, "again?"

Act Two begins a lot like Act One, except you're moving from one village square firefight to the next instead of one castle hall firefight to the next. Once you encounter von Schabbs, an encounter that captures the feel of some of The New Order's more tense moments, the game goes through a major shift and you're deposited in the middle of a zombie survival game. While "Nazi zombies" may have considerable cache in the pantheon of video game villains, the fact of the matter is they are not nearly as fun to fight as the non-zombified version. They're bullet sponges who make a beeline, albeit a shuffling one, right for you. Out of the grind and into the meat grinder.


It's good to see that The Old Blood doesn't eschew its big brother's penchant for secrets. Watch carefully and you'll find little secret areas tucked away here and there, and while most contain collectibles and bonus ammo and armor some also hide the game's nightmare levels. The nightmare levels transport you into levels inspired by the original Wolfenstein 3D, blue walls, flat sprites, and all. Some things are retained from the modern game such as the weapons available to you (and their modern visual models) and location-based damage (the original Wolfenstein 3D even predates such now ubiquitous concepts as headshots). The goal of each of these levels is to make your way to and out of the exit, for which you will be rewarded a trophy. They're an interesting change of pace and, if you miss one, an incentive to replay a level, but I felt that they ran a little long, a side diversion that eventually wore out its welcome.

Overall you get a lot of gameplay for a downloadable title, and even more so if you try to find all of the secrets and collectibles in each level. You're also getting the same basic gameplay that comes with the triple-A The New Order title, somewhat of a rarity in the downloadable shooter space. On the other hand, the simplified story and objectives that come with a downloadable title can make the battles feel like a grind at times. It's certainly recommendable to anyone who really enjoyed The New Order, or is a particular fan of the genre. Casual gamers or those with only a vague interest in shooters may find themselves losing interest before they have the chance to club their first Nazi zombie over the head with a lead pipe.