If you're sure that you remember there already being a LEGO Marvel game out there, you're right. This one's a bit different, though, at least from the perspective of the particular slice of the Marvel universe that it focuses on. This one is an Avengers game, and an Avengers movie franchise one at that, so the franchises that Marvel sold the movie rights to before they were brought into the Disney fold are absent here. This means no Spider-Man, no X-men, and no, ahem, Fantastic Four. Not that I would necessarily count that as a knock against the game, but I bring that up in case you're reading this review in your Spidey PJs right now. It also means that the game's story takes its cues from the recent Marvel films featuring the Avengers heroes, with the usual LEGO humor treatment, of course. The game opens with the same battle scene that opens Age of Ultron, and as you're playing your way through it you'll probably think that the game's story will continue to follow the movie's plot from there. However, that's not the case at all. This game's story is really more of an original remix of all of the movies that have been a part of the Avengers franchise the past several years. Flashbacks and flash-forwards will have you playing through scenes from The Avengers, Captain America, Thor: The Dark World, and more. If you've seen all of these films, then it's kind of fun to see the way they have all been put together here, and there's a bit of anticipation in seeing where the game will take you next. And if you haven't seen them all, well, it will probably be hard to follow just what is going on story-wise and it all may seem more like a jumble of random levels than anything else. You can have fun with them, sure, but they will be absent of a consistent narrative context.

Going back to that opening scene, it's probably one of the more enjoyable LEGO levels I've played recently. It has you jumping from one part of the battle to the next, with the Avengers paired off into teams of two each doing their part to assault the Hydra fortress in Sokovia. It's a quick-moving level, you only spend a little time with each super hero pair as they work in tandem to accomplish an objective that will help push back the forces of Hydra and open the way in to the fortress. While there are plenty of goons to dispatch, the pure button mashing of previous LEGO games in the opening level is punctuated with specialized combo attacks unique to each character. When you can perform one of these attacks, a Circle button icon appears over the head of an enemy - press the button and enjoy the show. And if you are close to an ally at the right moment, the two characters will team up to perform a special attack. It makes the super heroes in this game feel more like super heroes than in previous LEGO games.

After the exciting opening level, the game's levels revert back to the more traditional style for a LEGO game. You'll move from one zone to the next, solving a series of puzzles that will eventually unlock your access to the next zone and move the story forward. None of the puzzles would qualify as a head-scratcher, but it is enjoyable enough to make your way through them. A lot of these have to do with smashing apart LEGO objects apart or building new ones from piles of bricks. Unfortunately the latter is merely an exercise in keeping a controller button pressed down while the LEGO character does all of the work. Some recent LEGO games have tried to spice things up a bit by turning the brick-building effort into a mini game, but LEGO Marvel Avengers has reverted to the "press and hold" method. And as for the smashing of things, that is something that's not just reserved for puzzles, and it is fair to say that you will spend more time in the game breaking apart little things made of LEGO than you will doing anything else. Breaking apart these objects results in an explosion of little LEGO pips that are used as a currency in the game for purchasing unlockables. While the smashing up of villains' lairs seems appropriate, it is a little odd to be tearing up a SHIELD base as Captain America. Although I have to say that I found a lot of humor in the situation as I tore apart Tony Stark's condo while playing as Pepper Potts. 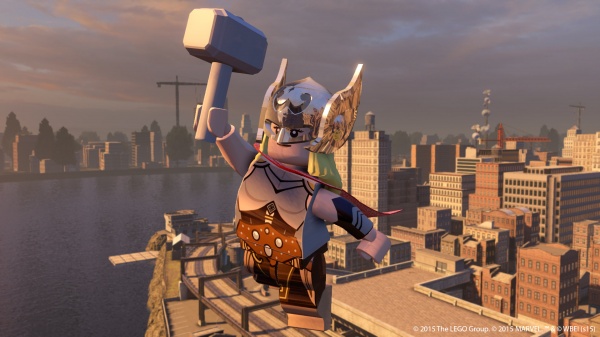 While the puzzles that need to be overcome to advance through the story levels are pretty simple, the game makes the puzzles that are required to find all of the collectibles necessary to complete the game at the 100% level a lot trickier to solve. The game has a devious side to it in that it sometimes will make it easy to see a collectible item locked away just out of reach, while actually finding a way to reach the item is another matter entirely. One of the more enjoyable optional puzzles in each level involves the LEGO version of Stan Lee. First off all you'll have to find him, and when you do he is invariably in need of rescue and figuring out how to go about rescuing him is part of the puzzle.

LEGO Marvel Avengers has a penchant for spawning enemies at a clip that runs well above that of other LEGO games, and at times I found it, well, somewhat annoying. Trying to make my way through a multiple step puzzle while facing a constant stream of minions felt more like a never-ending interruption than a heroic battle against evil. Here those super hero combos that were fun in the opening level quickly outwore their welcome as it takes longer to defeat an enemy while a combo animation is playing its way through to its end than it does by simply mashing the attack button.

Like in prior LEGO games, the levels in LEGO Marvel Avengers are designed to be played a second time through. There are obstacles in every level that require a particular talent to overcome, with those talents being absent in the characters you're given to play the level with while in story mode. Discovering all that a level has to offer and shooting for a 100% game completion rating requires returning to the level in free play mode with a new set of characters that possesses a different talent profile. In LEGO Marvel Avengers you'll have to wait to complete the storyline before the game will fully open up its multiple hub worlds and allow you to replay missions at will.

Overall, LEGO Marvel Avengers doesn't stray too far from the LEGO game formula. Its playful mashup of the Avengers movie titles, multiple hubs, and two-hero combos differentiate it a bit from other LEGO games, but not so much so that it provides compelling motivation for those who've had their fill of LEGO games to return to the fold. And the tendency towards mindless button-mashing that's been with the series since the beginning goes into overdrive here. It's easy enough to recommend to fans of LEGO games, though, as they all pretty much already know what they are in for here. It's just a little disappointing to see things return to the base formula after LEGO The Lord of the Rings and LEGO The Hobbit added so much more to the series.

Final Rating: 76% - An enjoyable enough Avengers game, but it needs to be more Tony Stark and less Bruce Banner.