Few games tell you all about the game in the title, but #killallzombies is one of those rare games in the crowd that basically sum up the whole game just in a few words... or group of words that are forced together with a hashtag to make one word. #killallzombies is an overhead twin-stick shooter developed by Beatshapers. In the fashion of Burn Zombie Burn, Zombie Apocalypse and other zombie shooters, the game has the main character armed with a gun against hordes of the undead. If you're into survival shooters where overall point value and beating that high score is the main motivation for playing then #killallzombies might just be for you.

#killallzombies' gameplay most closely resembles Smash TV at its core. From the main menu, the game has three options of play - survival, co-op ladder and defend the flag - but only the survival arena mode is available at the time of this review. The developers have said that the other two modes will be free through future updates, but the game starts off feeling incomplete due to seeing that only one mode is available. While it is nice to see what will be available eventually, it's a bit of a nag to see modes blocked off from the start.

Once you start out in survival arena, the game will present you with the controls for the game and some starting weapons. The main character starts out with only a pistol but can gain access to other starting guns depending on how far you make it through the waves of undead. Overall, this game has TONS of weapons that players can use. Once the match starts, you'll have to kill off constantly approaching zombies from all sides of the hexagonal floor arena to gain points and experience per kill. The shooting is quite satisfying and each weapon has its own ups and downs. Your character can also melee attack zombies, but this seems rather useless since it only slows down your character for a minimal damage attack that often only kills one zombie out of a whole crowd of gathering zombies that surround you - it's basically the recipe for disaster most of the time.

Some weapons are long range, some weapons have a heavy reload, some weapons have a big spread among other ups and downs. Zombie variety didn't change all that much except for the occasional bigger zombie that took more shots to kill - the game is said to have bosses and other enemies judging from the trophy list, but I never could make it far enough through the waves to see them. Along with the zombies, objects are constantly dropped into the arena as the zombie waves pass by. Cars, trucks, ambulances, explosive canisters, spinning spiked blades and many other arena obstacles fall throughout your battle with the undead. You can shoot some of the obstacles to create explosions that will kill off the surrounding undead and might also provide your character with a certain power-up depending on the obstacle that was destroyed. 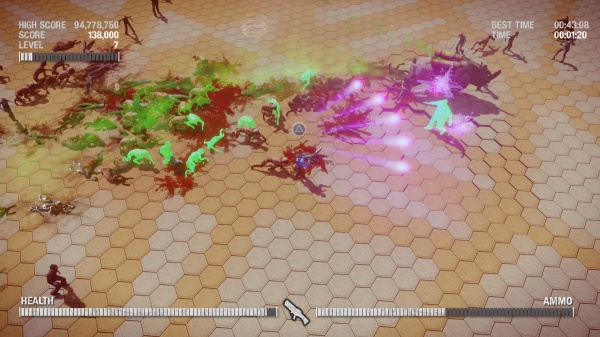 Besides obstacles, the arena floor might suddenly rise up and separate your character from zombies or keep your character from getting away from a group of zombies. Along with the arena randomness, your character gains access to random perks that can be used a few times during gameplay. Once the perk button is pressed, players can decide between four randomly generated upgrades that might help or make the current situation harder, but reward your character in the end. Perks might unlock instant new weapons, freeze zombies, nuke the entire screen of zombies or obstacles, kill your player at a costs of extra points or a full weapon selection to start your next run, or many other possibilities. The constant changes through arena obstacles or perk upgrades makes each run quite different and fresh.

Players can choose to broadcast their game on Twitch and allow their audience of fellow gamers to either help or hurt their progress through voting between rounds. Viewers can type out keywords that can help or hurt your character in terms of health and power-ups. This is a really cool feature, but if you don't have an audience on Twitch already, you're not likely to get much use out of it but if you're a popular Twitch streamer, this game might be quite fun on your channel.

Graphically, the game is rather simple. Zombies die in a pool of their own blood per shot and bodies litter the floor throughout your gun carnage. I never noticed any framerate problems or slowdown throughout the massacres. The game seemed to run fine throughout all the killing sprees. My main gripe with the presentation is that I feel you should have the option to zoom out or at least enhance your field of view from the normal viewpoint since it's easy to get locked into one side of the screen very quickly from zombie crowds that suddenly appear in your viewpoint from a side that appeared clear. The way it stands, you only have the current view to help out, which is a decent zoomed out view, but I feel an even more zoomed out view could help a bunch especially for the later waves of zombies. 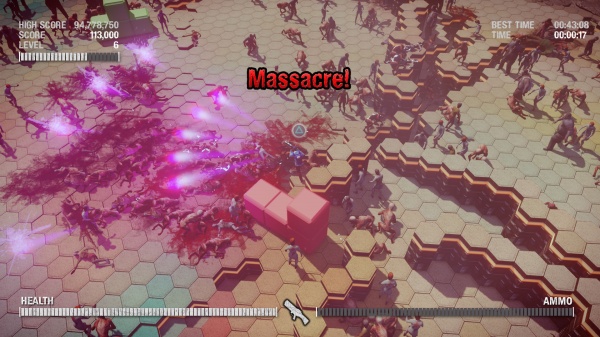 The game's overall sound effects seem fitting, but the soundtrack is very bare-bones for the most part. You'll get rock music on the main menu and during gameplay that constantly loop - the music during gameplay seems varied enough and all the tracks seem fitting. The announcer's voice seems perfect, but it would be better if he had more lines. His voice really adds to the mood of the killing spree, but you have to have several zombies on the screen to get him to commentate much besides the constant "level up" confirmation when your character gains a level or "new encounter" phrase while progressing.

The controls are solid for the most part, but the aiming doesn't seem exact enough. Aiming with the right analog is often not precise enough to pinpoint aim at a single zombie in a crowd. I found myself often, moving the right analog back and forth between one area just to try to focus aim on a single target. Whether this a problem with the PS4 controller analogs not being precise enough or the actual game, I don't know, but it's really annoying to have to go through so much trouble just to hit a single zombie that keeps chasing after my character.

Overall, the game has a great survival mode that is both fun and addicting, but the overall experience is up to whether you find it fun to continue starting the mode over to try to gain a new score or not. Thankfully, there are plenty of weapons to unlock while advancing through the waves of zombies, but I can't help but feel that most players will only pick this game up and play it a few times before getting bored. The game is fun for what it is, but it really needs other modes - even though some are promised for the future, there isn't enough to tide us over until then.

The Good:
+ Addictive shooter gameplay
+ Each playthrough feels unique thanks to the perks and random obstacles

The Bad:
- Survival mode is the only current mode of play (the rest are coming soon)
- Precise aiming is hard
- Melee seems totally useless
- The games needs a zoomed out viewpoint for later zombie waves since the default view is too zoomed in

Final Rating: 60%. A fun main mode of play that can get quite addicting, but once the novelty fades there isn't anything else on offer except for the promise of future upgrades.