Back when Devil May Cry 4 originally hit the PS3 and Xbox 360, I felt like I was in the minority because I actually liked the game. I remember the Internet whining well; "DMC3 was sooo much better," and "Why can't I play as Dante until the second half?" are the two beefs I remember most, and I disagreed with both. DMC4 was easily as good or better than DMC3 and I liked Nero, DMC4's main lead. Now that Capcom has released a remastered special edition of the game with all kinds of little extras, I expect that debate will bubble up again, that is if fans can take time out from complaining about Dante's new look in the recent DMC reboot.

In case you didn't play DMC4 last generation, I'll get you up to speed. The game takes place between the events of the original DMC and DMC2, and features the aforementioned Nero as the main character. Nero, who has similar powers to series protagonist Dante, is sent to assassinate our hero after he wipes out The Order of the Sword and the demons associated with the group. As Nero hunts Dante his true motivations come to light and the story is turned on its head, as is the gameplay. See, for the first half of DMC4, you play as Nero on the hunt for Dante. The second half has you playing as Dante, but backtracking Nero's footsteps to where the game begins. It's an interesting setup and provides the best DMC story of any of the games. By seeing things from Nero's perspective, you get a much deeper, more complex view of Dante as a character, and the insights tie the game nicely to both the awful DMC2 and the amazing prequel DMC3. 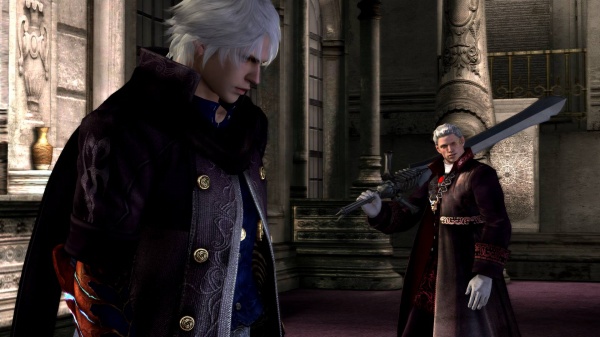 The gameplay is what made the Devil May Cry series the powerhouse it is, and the combat in DMC4 is the most refined and challenging in the entire series. This is no button-masher; like the Ninja Gaiden games, you'll need expert timing, and some serious skill to perform the moves needed to get by. Yes, it takes some serious practice to get the fighting system down, but once you do it becomes a beautiful ballet of swords, guns, demonic powers and plenty of blood spray. The real draw here is that Nero and Dante play completely differently, giving you two characters to learn and master. Admittedly, I enjoyed the second half of the game more because of my previous experience playing as Dante, much like how you naturally settle into a new God of War game with the Kratos combos you know and love. Nero is no slouch, but familiarity made the Dante portion of DMC4 my favorite.

As you can imagine, the game that looked and sounded great on the PS3 and Xbox 360 looks and sounds even better in this next gen remaster, but is there any reason for fans to double dip? Capcom has added some extremely tempting features to this special edition, features that speak more to those who are already intimately familiar with the series than to newcomers. Three new playable characters, including Dante's evil half-brother Virgil, have been added, meaning you now have FIVE characters to master. As cool as that is, another new feature is what got my motor running - you can now switch to an all new Japanese language track! This won't make much of a difference to most, but I absolutely loved the option to swap between the two. Capcom has also added new opening and ending cinematics and a Dark Knight mode, which all but doubles the number of enemies you'll need to dispatch. Word of warning: I really enjoy this type of challenging, combo-based action game and I like to think I'm a pretty decent player. But even knowing my way around a controller or two didn't help much in Dark Knight mode; I got absolutely slaughtered before making it to the halfway point of the story. Again, like the Ninja Gaiden games, my loss was NOT because the game is "cheap," but because I need to brush up my skills. Challenge versus fairness is a tough balance to strike, but DMC4's Dark Knight mode pretty much nails it. 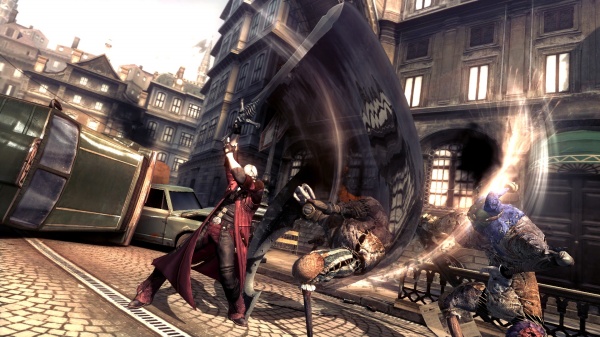 Unlike a lot of remakes/remasters, Devil May Cry 4 Special Edition seems to have been made for those who already know the game, rather than those who may be starting the series for the first time. The game is as fun and challenging as it was back in the day, and the updates and additions are sweet enough to make even stingy DMC fans shell out. New fans shouldn't be discouraged, though; DMC4 can be a good jumping off point if playing through the entire series seems enticing. Unlike the DMC reboot, DMC4 is the pinnacle of the series. SO now can we have another game with Nero or the Dante we all know and love? Please, Capcom? Please?

Final Rating: 94% - A special edition of Devil May Cry 4 indeed.