This isn't going to be one of those reviews that assume that you have played Tearaway on the Vita and are considering playing it again in its PS4 incarnation. I feel that such reviews are a disservice to the undoubted majority of gamers who have never played the game before and are curious as to whether or not Tearaway Unfolded is both a good game and a game that they would enjoy playing. The answer to the first part of that question is "yes", but I'll leave the second to you to answer for yourself after you've finished reading this review.

Tearaway Unfolded takes place in a world entirely made of construction paper. It's a beautiful and magical world, but it is also a world in crisis. A tear has appeared in the sky, creating an opening to our world and releasing evil little 'Scraps' upon the construction paper world. These Scraps are covering everything that they can in newspaper pages, taking the color out of the world and replacing it with black and white in what is undoubtedly a thinly veiled allegory for how the industrialized world has historically treated nature.

From there the game takes an unusual approach to storytelling. Your first interaction with the game is through a pair of disembodied narrators who seem to exist somewhere between the game's world and your own. They are aware that you are sitting on the other side of the tear in the sky, and that you have the power to control the destiny of the paper world. They have a message to send to you, so they place it in an envelope and then, this being a paper-based world, fold it into the messenger, the character that you will be controlling as you play the game. Your goal is to help the messenger reach the tear in the sky and deliver the message to you. 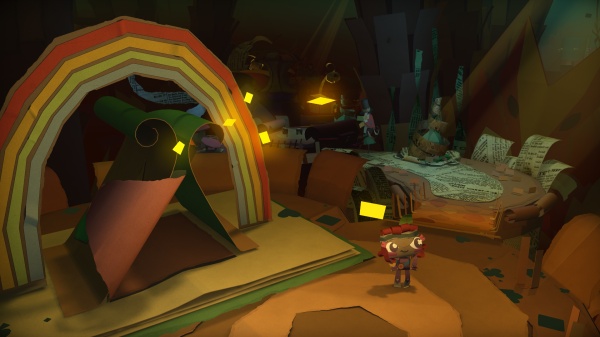 On a basic level, Tearaway Unfolded is a platform game. You'll need to navigate a world of platforms and pitfalls while solving puzzles that impede your progress and fighting the enemies who would like to stop it altogether. However, Tearaway Unfolded is not your typical platform game. First of all there's the look of the game - everything in it does indeed look like it was made of construction paper, and you'll feel like you're walking through a large, detailed, and very cool art project. Then there's the interactivity with the world, which goes far beyond your standard set of jump and attack buttons. You have god-like powers in this world and will use the PS4's controller to interact with it in unique ways. Pull a trigger and the controller's light bar will shine through your screen into the game, and you can move the light around by moving the controller. The light will make residents of the paper world look up at you with awe, mesmerize Scarps, and peel back the newspaper covering the world, among other things. A swipe of your finger across the touchpad will send a breeze through the world, blowing around the paper in its path and sweeping Scraps off of their feet. And if you have a PlayStation Camera hooked up to your system, you'll see yourself staring back through the tear in the sky, and find yourself appearing in the game in a number of other places.

This interactivity extends to creating the world itself. The game will ask you to trace out objects on the controller's touchpad and then apply the objects you create to the world. For example, you may be asked to draw a butterfly wing, and after that you'll find yourself in a meadow filled with butterflies of your making. The tools allow you to use different colored papers and to stack cuttings to create more complex objects and patterns, so if you want polka dots on your butterfly wings you can have it your way. It really is pretty cool to see your artwork applied to the game's world, but the touchpad is not the easiest drawing tool to use. Drawing even basic shapes can be a bit tricky, and it made me feel like my artistic talents had regressed to a pre-kindergarten level. Luckily, the game has a companion app available that works with the PlayStation App to allow you to use a tablet as your drawing pad, and I'd definitely recommend using it if you have a tablet, or even a smart phone, available. You can also use the Vita as a second screen if you own one, and as with the app the ability to draw on a screen and see what you're drawing rendered under your fingers rather than across the room on the TV screen goes a long way towards helping you get the most out of whatever sketching skills you happen to possess. In any case, the game keeps what it wants you to draw pretty simple, so as long as you can draw basic shapes and curves you'll be fine. And it's not all drawing - there are plenty of times in which you'll be placing stickers in the game to do things like creating a face for an NPC. 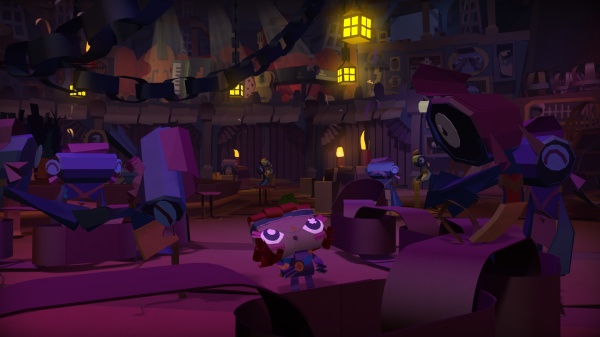 The gameplay itself follows the standard platformer model in which you make your way through linear, themed levels. In Tearaway Unfolded there's more emphasis on puzzle-solving than on fighting enemies, and while all of the puzzles are clever and interesting, they are also pretty easy to both figure out and complete. The game is very good about always having hints at the ready for you should you get stuck, but if you're old enough to read them then you probably don't need them. I think that I would have had more fun with the game if I was forced to think and experiment with the puzzles.

When you do encounter enemies, the battles are like little puzzle-based arena matches. Your way will be blocked until you defeat all of the enemies in the battle, and your first step to winning the fight is figuring out how to do so. The messenger doesn't jump on heads or fire weapons and so you must determine how to use local environment to defeat the enemies, be it by bouncing them off of a cliff or leading them to Scrap-eating plant. There's usually a little more thought involved in determining how to defeat enemies than with the regular puzzles, partially due to the fact that you're often forced to run around in circles to save your skin while you're thinking. The game is very forgiving of mistakes - lose a battle, or make any other kind of fatal mistake, and the game will quickly get you back into the action as soon as it "folds" another Messenger for you to play.

Overall, Tearaway Unfolded is unique and charming enough to recommend to gamers. It really is a good game for kids to play as the challenge level isn't very high and they'll love seeing their drawings come to life in the game world. Older gamers will likely enjoy the game as well, just as long as they view it more as an interesting and even relaxing experience with an imaginative game than as something that will challenge their gaming skills. After playing, you'll feel more like you enjoyed a fantasy movie than you will feel like you've beaten a challenge. And sometimes that may just be exactly what you are looking for.

Final Rating: 88% - Tear yourself away from ordinary games and let this one's magical world unfold around you.