There are some games that just look deceptively simple. Styx, on the outside, is one of those games. A stealth-based 3rd person action/RPG game, Styx is a game that made me re-think what I thought about Indie video games, for better and for worse.

You start the game as Styx, a little green Goblin - the kind that you usually end up fighting in games like this. He's in a tower that's been taken over by humans, with the simple task of reaching the middle of it where the World Tree is located. The tree is a source of Amber, something highly valued for its source of magical powers. 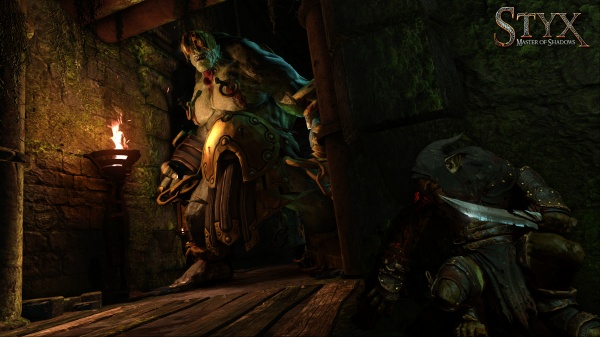 Now, I'm an actor, which means that I'm a sucker for good voice acting, and Styx has better voice acting than a lot of the AAA titles that I've played in the recent past. This may seem like a minor detail to most, but it's something that's often overlooked, but it really helps connect the player to the story, the character, and the game as a whole.

The story and characters are simple, but never boring, which is a fantastic and refreshing relief from lots of games that feel that they must polarize their characters as mind-numbingly dull or needlessly complex.

The gameplay is remarkably simple. Styx feels like a game that could have been made 10 years ago on the PS1, but with the updated graphics and playing style, has made its way up to the PS4. I say that lightly, however, because this game is anything but easy, even on the normal difficulty. The enemies are not stupid, and you must use your brain to get past each level (well, they're not truly levels, but the way that the game is structured makes you feel like each room you infiltrate is a new level of the game. Ah, the old days.) There are a variety of ways in which you can accomplish your tasks. The ways range from your magical Amber-induced powers, to the good ol' hide-and-sneak technique. 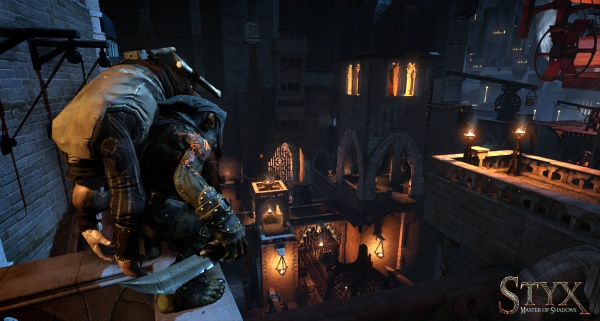 Before I make Styx sound like some common run-of-the-mill stealth title, there's one caveat: you cannot engage anyone in combat. There is no true combat system in place if you're discovered by those you're trying to sneak around. In some other games I found the stakes being lowered significantly by the fact that, even if you are discovered, you can fight your way out of pretty much any situation and return to stealth almost instantly, but that's not the case with this game. And that's definitely a plus.

To be fair, this game does have some downsides. Though I enjoyed the game quite a bit, there were still times where it wasn't necessarily too much fun. It felt a little like work, though it was rewarding when those parts were over. In addition, it's not easy to put down and then pick back up a few days later, so if you don't have a lot of time right after starting, I recommend waiting until you do to begin.

Overall, though, Styx is actually quite refreshing, and one of the better stealth games that has come out in recent memory. Many of the "AAA" stealth titles that have hit the market since the changeover to the new generation have missed their target by quite a lot, so if you're a fan of staying in the shadows, pick this one up for sure.

Final Rating: 86%. Pick up Styx if you're a fan of staying in the shadows and don't want to have to dust off your old PS2 just to play a proper stealth game.