After spending time with Battleborn in its early stages and playing through its betas, I have to say that I'm a little disappointed with the final release. It probably has a lot to do with the fact that I was surprised to find that I had already seen most of the game. Three multiplayer modes with two maps apiece and five story missions don't add up to a lot of content. Maybe it's that I expected more from the game given that it's developed by Gearbox and their Borderlands games rank up among my favorites. The world-building and story in Battleborn feel woefully underdeveloped, especially compared to the rich universe of Borderlands, and it seems that you can get more story out of Battleborn by reading what's on its official website than you can from playing the game itself. It probably also has something to do with the painfully slow manner in which the game unlocks new characters for play. You'll have to put hours into the game before you'll have a new character available for play. I'm sure it's a combination of all of the above, with a few other intangibles thrown into the mix. In short, Battleborn is no Borderlands, and for the "in long" let's start by looking at the game's story mode. Well, first of all "story mode" is a bit of a misnomer. There are eight co-op missions in the game that open with short character conversations to set up each mission and are sprinkled with a few more such conversations throughout, but there's really no context to any of it. Each mission feels like it lives in its own isolated world. There is an extended opening animated sequence you'll see the first time you play the game and are walked through the tutorial mission, but it's really an extended music video that shows some of the game's characters running around and destroying everything that they see. The animated sequence did remind me of Aeon Flux, though, which earned it a degree of respect from me even though it was basically a strictly audio-visual experience. In the time I spent with the game, I didn't see much that related to the whole 'heroes from the universe have come together to save the last star' theme that's supposed to serve as the game's central story.

It's not just the lack of a cohesive story that's disappointing; it's the mission design as well. Each is essential a series of arena fights and boss battles, between which you fight your way through scattered enemies to reach the next set battle. Doing this in single player mode is very difficult. It's not just the sheer volume of enemies that you have to dispatch or that it's difficult to cover multiple spawn points on your own, but also that each hero is a specialized character. Play a melee-focused character and get torn apart by ranged enemies. Play a long-shot specialist and get mauled by melee attacks. And there's no such thing as a tank/healer team when you're playing by yourself. These missions are far better taken on in co-op mode, but doing so will really throw what little continuity there is in the story out of the window. In single player mode you are forced to play the missions in order - completing one unlocks the next - but in co-op mode the game serves up two random levels and then lets the players vote on which one to play. Success in co-op play is not guaranteed either - the game throws enough enemies at you to overwhelm your team, especially in each mission's climactic battle. Missions often end in failure, and usually at the very end, so expect to play plenty of 45 minute battles that come completely unglued at the end. The story missions are essentially a collection of strikes rather than a campaign, and that's probably the best way to approach them. Pop into co-op mode when you unlock a new character, get used to the character's play style and special attacks, and then take that knowledge with you to the multiplayer modes. 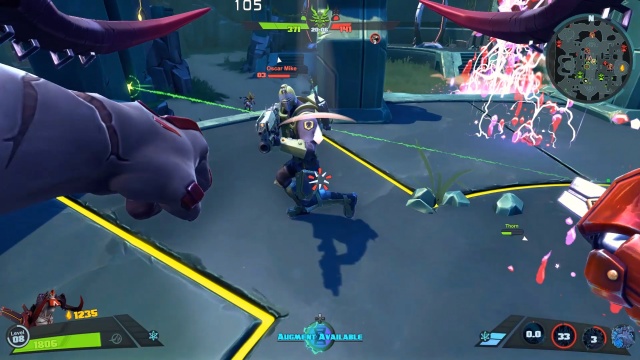 As noted above, there are three multiplayer modes. The first mode, Capture, should be familiar to anyone who plays multiplayer shooters as it is a standard control mode with three points that teams need to capture and hold to earn points. The next two modes, Incursion and Meltdown, draw their inspiration from MOBA games.

Meltdown has each team escorting their minions to "recyclers" while trying to prevent the enemy minions from being recycled. Points are awarded for each minion that survives the march to the recycler and is recycled. While players certainly can go after each other, the focus in this mode really is to take out the enemy's minions since that is the only way that the other team can score points towards victory. Player kills are a means towards the end of keeping enemies from killing your minions.

Incursion is also a minion-focused mode, but with a different focus for the minions. Each team has two heavy weapons that are essentially shielded tanks. The goal is to destroy both of these tanks, although you'll have to fight your way through and destroy the first before you can attack the second. In this mode the minions are the shock troops - the tanks are too powerful to be taken down by the players at the start of the mode, so the minions are used to soften the tanks up enough that the players can finish them off.

Meltdown and Incursion can both take a while to complete - expect to devote up to forty minutes to play through a single match. Not all matches take that long, but they do tend to run long more often than not. As is often the case in battles of attrition, there will be times when one side will realize that they are just far enough behind that their best efforts won't result in anything but delaying the inevitable. Battleborn gives the team behind the curve the opportunity to surrender in these cases so that there is another option in addition to dropping out or investing more time in a futile effort.

The FPS-meets-MOBA focus of the multiplayer is an interesting blend of genres at first glance, but in practice it just doesn't quite come together in Battleborn. Situational awareness in a MOBA is usually enhanced by a top-down viewpoint and a full HUD, but the FPS viewpoint here makes it difficult to keep track of what's going on when you're in the midst of clashing minions and players. Things are made even more chaotic by the game's visuals. The animated effects of the various characters' special attacks, the visual damage counts, your damage direction indicators, and constant minion and turret fire often make it difficult to tell exactly what's going on and leave you blind firing in desperation. Battles are more often mob scenes than anything else, and there really isn't any of the strategy that goes into MOBA games at play here. When you couple this with the long match times, making your way through the longer battles can become exercises in tedium. This in turn is exacerbated by the dearth of maps in the game, a problem compounded further by the fact that players have settled on their favorite map for each mode and rarely vote for the other. In practice you'll find yourself playing on the same map in each mode.


The majority of the game's characters will be locked when you first play the game, and you'll need to level-up to try out characters other than the small handful available at the start. First, though, the game has a number of leveling systems at work simultaneously, so they bear a little explanation. Each player starts each and every game, be it a single player or co-op mission, or a multiplayer match with a level one character. As you earn points for doing things in the match - player and minion kills, building turrets, healing players, etc. - you will advance from that starting level up to a level cap of ten. With each level advance you will have your choice of one of two character modifiers - for example, do you want a boost to your shield recharge rate when you use a particular power or would you rather that it slowed enemies instead? The benefit of this in-match leveling system is that you can tweak your character's abilities to fit your play style or the match type. The drawback is that if you are killed early in a match you can find yourself behind the curve and at a significant disadvantage compared to the other players.

After completing a match you'll earn two types of experience - one for your Command Rank, your overall level as a player, and the other for your selected character. Character level primarily determines when you can unlock alternate taunts and skins, although in this case "skins" are really just alternate color schemes. Command Rank is far more important because it is your key to unlocking additional characters for play, but the game doles out points for your Command Rank at a miserly rate. You'll need to invest a significant number of hours into the game to work your way through the roster, which was probably a common complaint during the game's testing because each character has an alternate unlock option. These alternate options can also take a little time to satisfy, though, since they require you to do things such as complete all of the co-op missions with a silver or better rating. The lower tier alternates have a lower bar, but it can still take you hours to, say, earn five match victories while playing as a certain class of character. 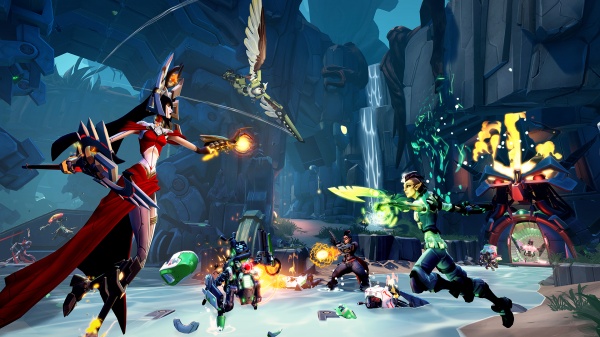 Command Rank also comes into play with the game's Gear Pack booster pack system. Gear Packs are blind packs containing an assortment of gear, each of which comes with one or more stat modifiers. Some of these modifiers will be trade-offs, such as increasing your shield recharge rate at the cost of lower total health. Up to three of these items can be equipped to take into battle with you, and you can manage multiple loadouts to customize them to your character or the game mode. This loot comes at different rarity levels, but to get to the highest level packs that guarantee more of the rare items and fewer common ones you'll need to reach a higher Command Rank to unlock each tier of packs. This leads to a rich getting richer situation in which higher Command Rank players will enter a match better equipped than lower ones, even though the characters are all technically level one at the start of a match. And I'm not sure if the game does anything to balance teams, or what criteria it uses if it does, as I've seen plenty of matches in which one team is all at Command Rank 3 or lower while the other team's lowest ranking player sits somewhere in the high teens. The good news is that the gear is not equipped at the start of a match - players will have to collect shards on the battlefield to use as currency to enable each piece of gear and the rarer the gear, the more shards it takes to enable it. And there's more good news. The Gear Packs are bought using in-game currency earned while playing matches.

Battleborn can deliver some enjoyable moments, but the lack of modes and maps, long match times, and excruciatingly slow progression combine to make the game feel like a grind more often than not. More content has been promised for the future, but it seems that at first the focus will be on new characters and story missions. What the game really needs, and needs sooner rather than later if it is to hold onto players' interest, is more maps and competitive modes.