Not A Hero Review

Bunnylord is a giant bunny, well, giant for a bunny which makes him human-sized. Anyway, he travels from the future to run for mayor of an English city. Why? Because getting elected mayor is the only way to prevent the apocalypse. So how's he going to get elected? Well, the electorate loves candidates who are tough on crime, and you can't get much tougher on crime than killing the city's entire criminal underworld. Unfortunately, they're going to fight back. That's where you come in, you're Bunnylord's fixer.

The game's levels are all variations on the same theme; a collection of 2.5D multi-floor buildings filled with bad guys with guns. To get through those bad guys you'll need to master the game's cover mechanic in which you duck behind objects, which is where the extra half dimension in 2.5D comes in. Press up on the controller when you're in front of a cover spot and you'll be safe from enemy fire, but you'll have to jump back into the open to return fire. It's an exercise in timing as you try to keep hidden while the bullets are flying and then move back into the open between enemy barrages or when they are about to go into or come out of cover. Sometimes you won't be able to find cover in time and this is where the slide move comes in. You can go low and trip an enemy up, and then finish him off with a single shot while he sits dazed on the ground. It's important for you to master these moves, because the game doesn't give you a lot of health to work with and if you die you will have to restart the level from the beginning. 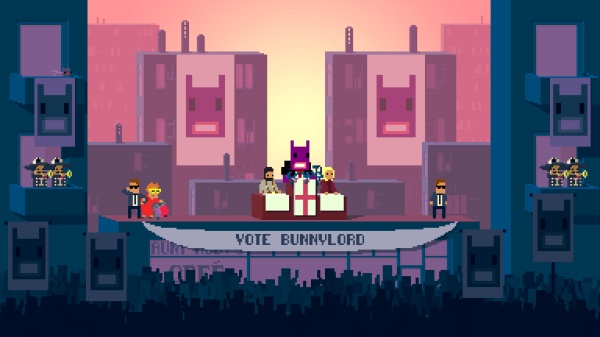 Outside of the cover spots, everything else in the game is strictly side-scrolling. To get between the floors of the buildings you'll need to find stairwells, each of which only connect two floors. Entering and exiting buildings can be done through ground floor doors, but more often than not the primary method of traversal is to jump through a window in one building into a window in another. This is sometimes the only way to reach some floors in the buildings that are curiously missing stairways. These jumps are usually blind jumps, and even though you can adjust your direction as you're falling you can expect to go splat a number of times while learning a level's layout.

Learning a level's layout and failing a lot while doing so is a big part of the gameplay here. The game mechanics don't change or evolve as you play, but the difficulty does which means you'll probably be repeating each subsequent level more times than the last. This does make the game a bit of a grind and cause some gamers to lose patience with it. You can change things up a bit by selecting a different character to play since each character comes with a different weapon and set of bonus attributes. Each character needs to be unlocked first, though, and the currency to unlock them is Bunnylord's "popularity rating". The popularity rating is determined by how many optional objectives you can complete in the missions, so you'll probably have to replay a few completed missions in order to sweep up missed objectives, which in turn means playing the same missions you had to repeat multiple times to complete in the first place multiple times again. Some of the grind through the game's levels is alleviated by Bunnylord himself, who is one of the more humorous characters you'll encounter in an indie game. Unfortunately, you'll need to enjoy this humor by reading subtitles because Bunnylord speaks gibberish that sounds like two balloons being rubbed together. 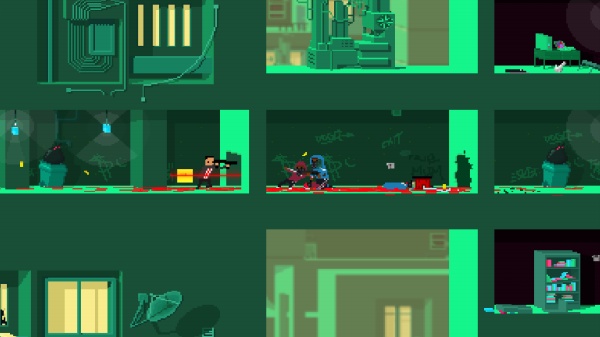 While the game can be fun in short stretches and Bunnylord is deserving of further video game appearances, overall the game delivers more frustration than frills. Completing a level after replaying it over and over again and trying not to let the cheap deaths get to you will give you feelings of relief more than accomplishment, and your reward for success is doing it all over again on the next level.

Final Rating: 70% - Grinding for the Bunnylord.