I have to give credit to Rockstar. Last year, when everyone else was releasing next-gen versions of their current-gen games that were no more than current-gen games running on a next-gen console, Rockstar did not release a next-gen version of Grand Theft Auto V. Instead, they've taken a year to make a truly next-gen version of their game, and the result shows that it was well worth the wait. In addition to the great gameplay, you now get next-gen graphics, an optional first-person view, and a GTA Online component that's bigger in next-gen and ready to go at launch rather than as a post-launch update.

Now some of you have probably played GTA V on the PS3 or Xbox 360, and if you have you'll undoubtedly be wondering if you should "upgrade" by buying the game again on a next-gen console. I'll take a look at what's new here first to help GTA V veterans make that decision, and then move on to a detailed look at the game itself as a benefit to those new to the game.

First thing up has got to be the new first-person perspective because, well, it has "first" in its name. The game allows you to instantly switch between the original third person, chase camera perspective and the new first-person view at any time. First-person view does manage to change the feel of the game, particularly when it comes to the bloodshed and vehicles. In the case of the former, the wanton violence aspect of the game feels even more so from a first-person viewpoint. It all feels more personal and less like you're watching someone else, and you may find yourself a little less inclined to go on a violent rampage against random people on the street. The game's cover system was obviously designed for play with a third-person camera, so even if you're playing primarily in first-person you'll probably want to swap back when you're firing from cover. 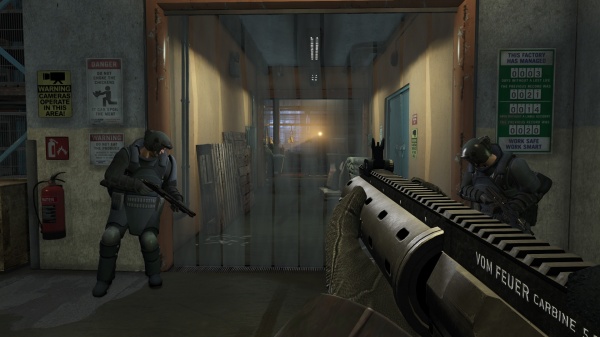 On the other hand, you may find yourself spending more time behind the wheel playing in the first-person view. The immersion factor is a lot higher when you drive down the crowded streets and watch it all pass by from behind a dashboard rather than while staring at a rear bumper. Personally, I found myself spending more time in the third-person view rather than the first. I felt a little more in touch with the distinct personalities of the three protagonists when I could see who I was playing at the time. I also found the third-person view made it easier to navigate traffic during high-speed chases, as well as making it easier to back out of wrecks and get back on the road, thanks to the increased field of view. Overall, the first-person viewpoint is an interesting addition to the game, but it's not necessarily game-changing and you may end up using the third-person view for the majority of the game anyway.

As for the next-gen aspect of the game, this isn't one of those cross-gen games that have been given a little touch-up for the newer consoles - GTA V takes full advantage of the increased horsepower of the PS4. The game runs at 1080p resolution which really helps to show off the game's graphics and detailed textures. You'll also notice that draw distances have been significantly increased, making it look like a haze has lifted from Los Santos. Returning to the topic of first-person view for a moment, GTA V has a whole new aspect that didn't even exist in the last-gen versions: car interiors. You probably already know how many different vehicles that there are in the game; now imagine that the dash and instruments of all of those cars are just as varied. And speaking of cars, you'll find that traffic is heavier this time around because the game takes advantage of next-gen horsepower to add more vehicles and people moving around the city. 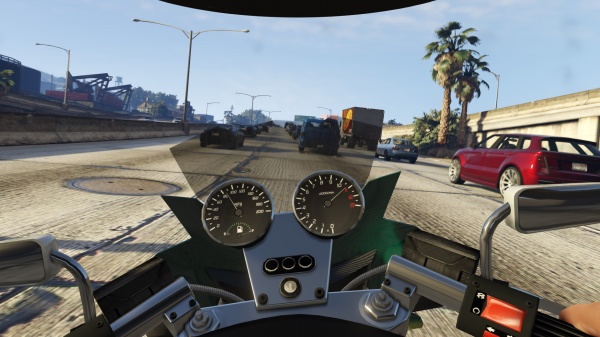 So do these changes make it worth it to buy GTA V again if you already own it? That's something that you'll have to decide for yourself. The core gameplay, though as great as always, is essentially the same, so it's a matter of whether or not experiencing everything again from a different viewpoint and with better visuals is worth playing through it all again. If you really enjoy playing GTA Online, then you may have stronger motivation to upgrade since you can bring your established character with you and the online mode will probably have a longer lifespan on next-gen than on the older consoles as more and more gamers make the switch.

Now I haven't forgotten about those of you new to GTA V, so let's change gears and take a look at the gameplay itself. GTA V is set in a fictionalized version of Los Angeles dubbed Los Santos. While Los Santos is a condensed version of the real Los Angeles, anyone familiar with LA will be able to find their way around Los Santos without too much difficulty and will recognize most of its landmarks. The game's map goes beyond the city of Los Santos itself, and includes the surrounding mountains and desert, and some neighboring hamlets. You'll want to spend some time driving across the game's world just to see how expansive, seamless, and filled with detail it all is. GTA V is a stunning achievement just based on its location alone.

There is a story in this vast city, or rather, three of them that join together to form the game's narrative. You first meet Franklin, a repo man with some smarts who is looking to use them to move on to bigger and better things, legal or not. He soon crosses paths with Michael, a retired big-heist theif who's grown tired of the malaise of the cushy lifestyle he's sharing with his ungrateful and dysfunctional family. And then there's Trevor, a former 'associate' of Michael's who's a borderline psychotic living high on the trailer trash dream.

You'll play as each of these characters, in both their own unique missions and missions in which they work together, and when you're not making your way through a story mission you can freely jump between them to roam Los Santos. This latter feature is particularly interesting because you just never know where you'll find Franklin, Michael, or Trevor when you switch to one of them. They continue to go about their lives behind the scenes and you just may pick an awkward moment to take possession of one of their bodies. 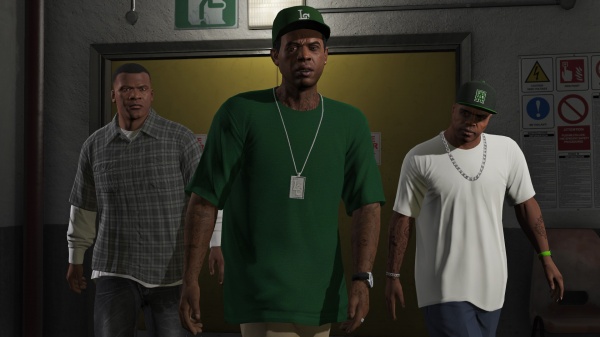 In addition to their distinct personalities, each character has their own special ability as well. Franklin and Michael can slow time while driving or in a gunfight, respectively, while Trevor can fly into a blind range, both taking and dealing a superhuman amount of punishment. You'll be able to improve their skills even further as you do what they do best, for example by driving dangerously while behind the wheel as Franklin. This "use it to improve it" philosophy works for all of the skills for each character, so even Franklin can become a better shot through more shooting. This also extends to other attributes, so if you want your character to improve his stamina or run faster, then you should spend some time jogging, riding a bike, or playing tennis. If you'd rather worry about an expanding wallet than an expanding waistline, you can invest your ill-gotten funds into the game's stock or real estate markets. And if you're more of the lazy type, you can go all meta and spend your time in the game watching TV, browsing the internet, or posting on social media. It's truly amazing how many activities there are available in the game beyond the story and side missions, ride a roller coaster, visit the VIP room in a strip club, shoot some pool, ... there are just way too many activities to list here. If you get bored in Los Santos, you're bored with life.

Of course there's an entire criminal aspect to the game as well, this being a Grand Theft Auto game and all. These activities range from dabbling in an occasional mugging and carjacking to the game's major heists that are multiple-mission spanning activities that take you from the set-up and planning all the way through to the intensity and action of the big score heist itself. As in previous GTA games, criminal activity will bring you to the attention of law enforcement. The more you evade the law and continue breaking it, the higher your wanted level becomes, increasing the police reaction to your activities from a patrol car chase to a National Guard style response. It all will end with you either arrested or dead, after which you'll respawn a little bit poorer at the nearest police station or hospital, or with the whole thing being called off if you manage to evade the police for long enough. This latter action is made all the more interesting by the sheer scope of a game in which you can literally run for the hills. 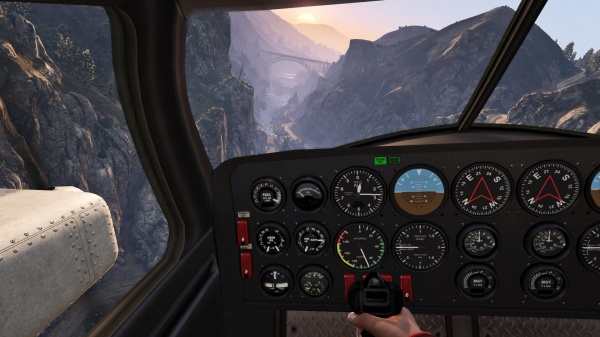 The multiplayer GTA Online mode is like the single player game in that you have all of Los Santos at your disposal, just without the story and with other gamers. You'll create your own persona for the online mode, replete with RPG style features like a set of statistics that are improved as you earn experience and gain levels. You can simply run around the city racing with or shooting at the up to 29 other players occupying your shard of Los Santos, or take part in more organized activities dubbed 'jobs' which can be anything from, well, races to shooting matches. Online mode is fun, more so with friends than strangers, although I must admit the lure of leveling my online character is strong enough in me that it does pull me out of the single player mode often enough.

My biggest complaint with the game is pretty much the same one that I've had with GTA games for awhile, and that's with the controls. First, the game likes to go its own way with the controller, using non-standard controls that take some getting used to - like continually tapping the X button to sprint. Then there's the actual game control itself, which while an improvement over GTA IV, still make gunplay and driving feel slightly 'off' when compared to other games. All of this is by no means a deal-breaker, but a great game should really have the great controls to match. Another complaint is with the load times when starting up the game or switching between the single player game and the multiplayer GTA Online mode. And be sure to set aside about an hour to get through the game's initial installation and patching before you get to play it for the first time.

Overall, GTA V is an amazing game. The size of its world and all that there is to do in it, probably make it one of the best entertainment values out there - there simply aren't any other games that create such a deeply detailed and immersive experience. Add to this the fact that it's all tied together by a story filled with wit and biting social satire, and you have a game that should be in every serious gamer's collection.

Final Rating: 96%. The extra year has been worth the wait.