At its heart Uncharted 4: A Thief's End is an adventure movie, an archaeologically driven treasure hunt that's an interactive Indiana Jones for the 21st Century. The writing and voice acting are of the highest caliber, and themes explored by the story will resonate with gamers, at least those who are paying attention. Uncharted series regulars Nathan Drake and Elena Fisher have settled down into a quiet and comfortable domestic life, with Nathan working for a salvage company rather than chasing after legendary treasures. Nathan's commitment to the life that he and Elena have made together is suddenly put to the test when Nathan's presumed dead older brother Sam suddenly appears. Sam is in need of help - he's indebted to a criminal overlord who demands that payment be made in the form of a legendary lost pirate treasure. Nathan is so desperate for adventure that he accepts his brother's story at his word, lies to Elena about where he's going, and takes off with Sam to crisscross the globe on in pursuit of a treasure that might not even exist. But in Sam Nathan sees a mirror of himself, and Nathan begins to question whether treasure is worth the cost it takes to obtain it, as well as why he is always chasing just one more treasure.

There's a lot going on here story-wise and it's going on on multiple levels, and in some ways telling this story comes at the expense of gameplay. The game has a slow start from a gameplay perspective with the time it takes to establish the characters and their relationships to each other. On the other end, the final third of the game is a bit of a slog as it takes you from a traversal section to a gunfight and back again in an extended cycle that seems to be there only to extend the game long enough to give it time to bring all of its story elements to a conclusion. While I was impressed with the story and genuinely enjoyed it, there were plenty of times toward the end of the game where I felt that the pirate island Nathan crosses at the end of the game would go on forever. 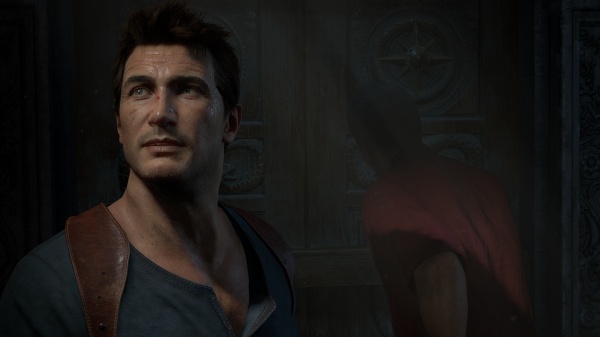 As for the gameplay, for there are three major elements to Uncharted 4: solving puzzles, traversing vertical surfaces by your fingertips, and fighting enemies, and often some combination of these. I enjoyed the puzzle gameplay - how could you not enjoy solving intricate mechanical puzzles built by pirates? - but I was left feeling a bit disappointed by this aspect of the game. Part of this is because the puzzles are all pretty much contained to the middle third of the game and after that they become few and far between. Another part is simply that the puzzles were too simple. Even when the solution wasn't immediately obvious it would quickly become so since Nathan would often share his thoughts on the solution out loud without prompting or a companion AI character would call out "Nathan, over here!" while standing in front of something integral to the puzzle's solution.

The traversal aspect of the game is fun as it turns castle walls and cliff faces into platforming sequences - even when I wasn't playing the game I found myself subconsciously identifying scalable walls in real life. The controls are excellent - you'll feel every bit like the master climber that Nathan is without any controller-induced awkwardness. In some ways the controls are almost too good - if you pay attention to when Nathan reaches out his hand you'll know that you can safely make the jump to the next ledge. Sliding down slopes is actually more of a nail biter, as the difference between life and death is a well-timed jump or toss of a grappling hook.

The combat in the game is well-implemented, and for the most part the game gives you the option of taking a stealth approach to things rather than going in guns blazing. Using tall brush and walls to stay out of sight, you can perform silent takedowns of enemies from behind or as they walk past your hiding place. The game's traversal gameplay often comes into play here, as you can shimmy along walls to both stay out of sight and to pull an unsuspecting enemy down to his doom. When the shooting starts it takes the form of a third-person, cover-based shooter. Enemy AI is pretty competent and will actively work together to flank you or catch you in a crossfire. This alone should keep you moving, but you'll get additional prodding from your grenade-happy foes and the destructible cover in the environment. And if that's still not enough, and assuming you manage to survive in spite of all of this, you'll find yourself running out of ammo pretty quickly. The game limits you to one primary weapon and one sidearm, and ammunition comes in different calibers, so you'll have to scavenge new weapons and ammo from fallen enemies throughout the firefight. The traversal gameplay doesn't end when the shooting starts, either. You'll face some memorable battles among rock towers and crumbling ruins that will require you to shimmy, jump, and grapple your way between firing positions - but you'll need to keep our your toes because your enemies can move around as well.

I found the shooter aspect of the game to be challenging and enjoyable for the most part, but the game has a tendency to serve up too much of a good thing at times. Battles can involve fighting off a dozen or so enemies, only to have reinforcements arrive just when you think that you're ready to move on. And while the game does have mid-battle checkpoints, dying inevitably means replaying at least a portion of the battle. Towards the end of the game you'll be in a traverse - battle - traverse cycle that will have you wondering just how many mercenaries work for the private military company hired by your competition for the treasure. According to the game's statistics page I dispatched well over 600 of these guys over the course of the game. 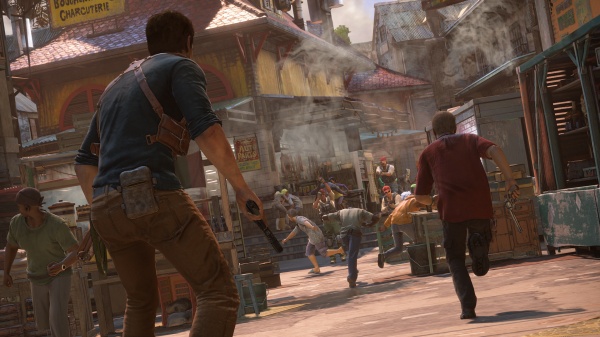 Overall the game's story mode is entertaining despite the padded stretches. I would have been perfectly happy with the game if the treasure was discovered a couple of hours earlier in terms of gameplay. Additionally, it would have been fine with me if the single player story mode was the entirety of the game - Unchartered 4 isn't the type of game that necessarily needs to have a multiplayer mode. That being said, I was pleasantly surprised by the multiplayer mode in Uncharted 4, and while I might have to think about it before recommending to someone that they purchase the game solely for the multiplayer mode, it is certainly enjoyable enough to keep you playing Uncharted 4 long after you've finished the story.

There are three modes available, all team-based: Deathmatch (both ranked and unranked), Plunder, and Command. Plunder gives each team an idol and the first team to bring their idol to a central goal point wins the match. Command is a capture mode with an additional goal of hunting the opposing team's top player while protecting your own.

One of the major things that makes the multiplayer game interesting is that the battles feature the same mechanics as the single player game. Not just the cover-based shooting, but the traversal as well. There are walls to scale and ravines to cross with your grappling hook. The maps are designed to take advantage of players' traversal moves, offering firing positions at different elevations and multiple routes around the map. You can't get comfortable anywhere and you have to watch your back as someone can easily find a way to come up behind you. If you go down you won't be out, at least not right away. Players can revive allies before they bleed out and save them the wait for the opportunity to respawn.

As you play you'll earn coins, and even find some treasure on the maps, which can be spent to upgrade your abilities for the match. Coins aren't just earned for kills, though, you can earn them for performing support actions as well. Coins can also be spent to charge the magic idol each player carries. Once charged, the idol can be unleashed, with the effect depending on the idol (each player class is assigned a unique type of idol). It's kind of strange to see magical effects in the multiplayer mode that don't exist in the game's story, effects like teleportation powers or an evil spirit generating sarcophagus.

More in line with the game's universe are the AI sidekicks. These also take coins to activate and each character class has their own unique AI companion. For example, you can summon aid in the form of a medic who keeps close to you and heals you when you need the help or a sniper who can help you take out enemy players. The AI is pretty competent and the companions do a good job of doing their jobs without getting in the way of you doing yours.

Overall, Uncharted 4 is a good game, but I can't help but be slightly disappointed in it. I wish there were more puzzles in the game, and that the puzzles that are there were more challenging. I also felt that the last third of the game was simply too drawn out, with too little variety to the gameplay used to fill out all of that space. I would have liked to see Nathan Drake close out the last adventure of his career more as a treasure hunter and less as a cold-blooded, murder machine.

Final Rating: 88% - The Thief comes to his end with guns blazing.