Guacamelee. The unique title brings to mind some sort of Mexican-fighting avocado-based dip, and it definitely should, because that is a perfect representation of what this game is: it's funny, it's intriguing, and it's Mexican. Guacamelee is a bright, colorful, and humorous Mexican "Dia de los Muertos" inspired side-scrolling fighting-action game. Developed by Drinkbox Studios, it has become one of the most well-known indie titles of all time, and with good reason: this game is all around fantastic.

You begin the story as a poor agave farmer who is tasked with saving the President's daughter from the evil-doers that have just taken her and destroyed the Presidential Estate. As an unimportant farmer, you don't stand a chance. However, as a Luchador, or a Mexican wrestler, you can overcome any evil. You're given your wrestling mask, and off you go into the vast world to destroy evil and save the girl.

The world is incredibly unique because it is a true side-scroller, yet it is also open-world. This is achieved by using different heights to control which direction you go. In other words, when you run up some stairs, your Luchador is physically going up, but on the map he is going north. I make this sound complex and hard to understand, but it makes sense when you play the game. It's actually quite brilliant, and works really well. 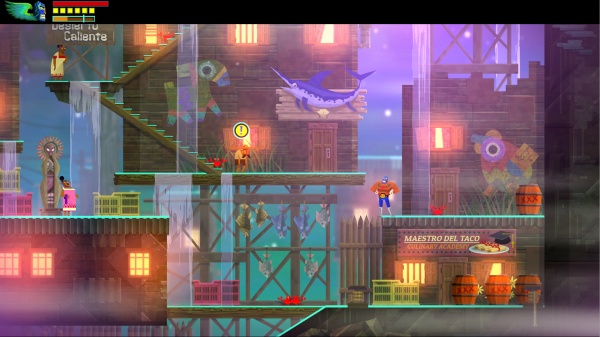 Enemies who inhabit this world often take the shape of skeletons or armadillos, both of which fit wonderfully into the story's backdrop, and are always fun to fight. They vary in difficulty from easy green-colored skeletons to the larger boss-skeletons, and everywhere in between. Each enemy you fight requires a different strategy to beat them: whether it's a unique move you must first do on them to break their shields, or throwing back grenade-like fruits at evil Cacti to kill them, the variety of enemies keeps you on your toes and ready for whatever comes next. I never once dreaded fighting enemies because of how incredibly fun and diverse the fights were.

Speaking of fighting, the action in the game is based on fighting games such as Street Fighter or Mortal Kombat, which is appropriate because the "Super Turbo Championship Edition" part of the title pokes fun at the absurd amount of different editions of Street Fighter that are put out for just one game. The combat starts out simple but grows more complex as you play through the story and you learn different moves, which not only help you in combat but also open new parts of the world to you.

The gameplay works well, and even though it's not strictly a fighting game, the controls are as tight and responsive as you could ever want out of one. The boss battles are fun and varied, and never too difficult, which I feel is a huge problem in games that feature them. 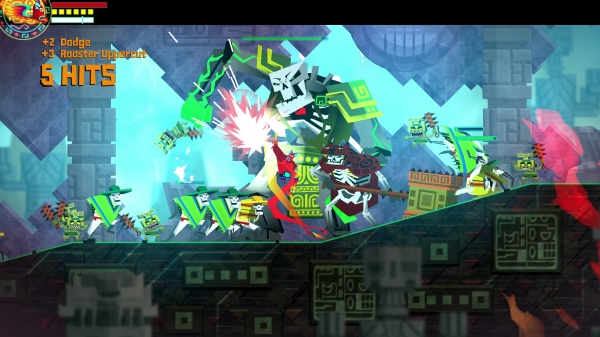 Though it's usually fairly normal, the game does feature certain problem-solving puzzles and weird ways in which to overcome them. For example, you gain the power to turn yourself into a chicken, or change the universe so that certain parts of the world exist, but not others. It's rather weird, but it still all works and never sticks out as too weird.

I enjoy, more than anything, that couch co-op is not only included but encouraged. Though online is also available, there is no replacement for sitting down with a group of friends and playing together. Up to four people can play at the same time, each with their own Luchador, and each working towards a common goal.

There really isn't anything bad I can say about this game. The art style is gorgeous, the gameplay is solid, the story is fun and interesting, and it's cheap and doesn't require a huge commitment. Guacamelee has it all going for it.

Final Rating: 95%. If you miss retro side-scrollers, or simply like guacamole, this game is a must play.