You would be hard pressed to find a gamer who didn't list Batman: Arkham Asylum and Batman: Arkham City among their favorite games of the last console generation. Arkham Asylum was the best Batman game ever created; expertly crafting an original story that both treated the characters with the reverence they deserved while also featuring some of the generation's best action/adventure gameplay. Arkham City bumped everything up a notch, becoming a free roam adventure that had Batman squaring off against the very best of his rogue's gallery. Batman: Arkham Origins followed, but many felt the spark ignited by the first two was all but gone, and the 3DS and Vita-exclusive, Batman: Arkham Origins - Blackgate was a little underwhelming. Both games suffered from bizarre design decisions and just couldn't stand shoulder to shoulder with Asylum and City. Original developer RockSteady is back with the fourth Batman game and the first of this new generation with Batman: Arkham Knight. While this new game does return the series to greatness, one or two little things keep it from matching up to my personal favorite, Arkham City. That said, Arkham Knight should be on the must-play list of every single gamer in possession of either a PS4 or an Xbox One.

The opening moments of the game are among my favorite parts, and they set up a compelling narrative and some seriously beautiful presentation. Things kick off with you in control of a Gotham City detective, and you view the entire sequence in the first-person view. As he enters a diner, things seem normal until he spots a customer acting strangely and things go absolutely crazy from there. Without going into too much detail on the specifics, the Scarecrow has threatened to release his fear toxin into Gotham City, prompting an evacuation. This leaves Gotham in the hands of Two-Face, the Penguin, and the rest of the city's best known supervillains, and you'll never guess who is called upon to clean up the mess. The fantastic set-up gives way to a story that stays interesting right through the end, and carries on and respects the events of Arkham City. If you played City, you know EXACTLY what I'm talking about, and no cheap "comic book" style clichï¿½ is anywhere to be found. I still think the story of Arkham Asylum was the best (and most plausible), but Arkham Knight doesn't disappoint. 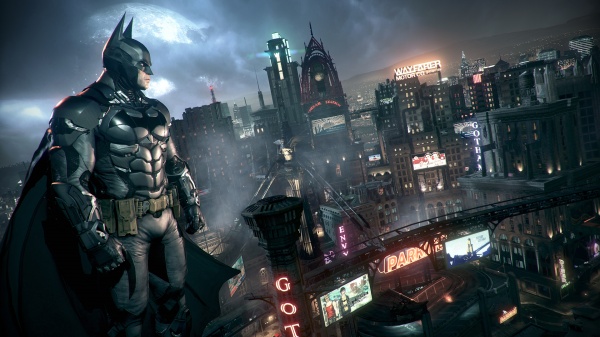 Seeing as this is the first "next gen" Batman game, you probably already know the presentation is top notch and mops the floor with pretty much every game out there. Again, the game is a free roam affair around Gotham City, which is probably three times bigger than Arkham City, and every single detail is a sight to behold. The city itself looks fantastic, with a sheen on everything like it has just stopped raining. Of course, the characters and their animations are better than ever, and the small details make both Batman and the villains seem like real people that could jump off the screen at any time.

And as jaw-dropping as the game is to watch, it is even better on the ears. The music is great, when it is there, and the voice acting is even more of a star. Tara Strong, who plays Raven on Teen Titans Go!, steals every scene as Harley Quinn, and Nolan "I'm in every damn game now" North is equally great as the Penguin. I could tell you that Kevin Conroy knocks it out of the park as Batman, but that would be like telling you the sky is blue or amiibo are tough to find in stores; it's true, but everyone already knows that. These performances are a big part of why Arkham Knight succeeds; without the characters' personalities on display and way out there, Batman is just some guy in a rubber suit. These villains define the game, and Batman as a character, so hearing them brought to brilliant life is one of the game's best features.

Like Arkham City, you'll be guiding Batman around a huge free roam environment, and controlling him is as seamless as ever. You still grapple to buildings and launch to further grapple points and rooftops, the free flow combat system has been slightly tweaked to make it a more fluid experience, and you still have access to all Batman's wonderful toys. These things all worked amazingly well in Arkham City, and seem to work even better in Arkham Knight. Playing the game is almost a seamless experience and you never do the same thing for too long, keeping things fresh. 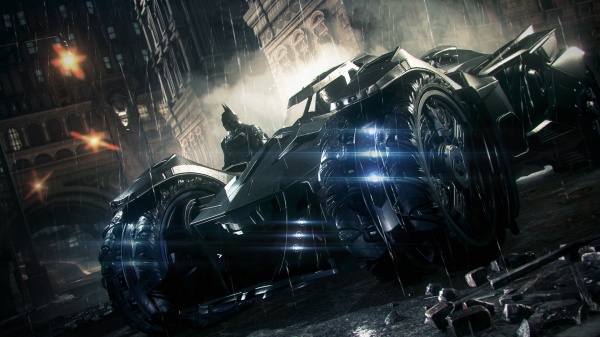 Wait, almost? Unfortunately, one of the things billed as the best new wrinkle in Arkham Knight tends to get annoying and mostly falls flat. I never thought I would ever form the following sentence, but the Batmobile just isn't all that much fun to drive. Yup, for the first time in the Arkham series, you get to drive the Batmobile. It seems awesome at first, speeding through the streets of Gotham like every Batman fan has always dreamed. The concept gets a little tired after one too many missions requiring its use, and by the end of the game having to drive becomes a bit of a drag. A little less in the way of flat out making you use it may have kept it's inclusion as a great thing, but we'll never know. If anything in this review will spark debate, it's this; some may love the Batmobile, but I may have actually enjoyed the game more consistently without it.

Beyond the main story missions, there is plenty to do around Gotham in the form of little challenges and side missions, and most of them are fun and definitely worth doing. The Riddler's clues, present in both Asylum and City, present a game-long scavenger hunt, and are shockingly my least favorite part of Arkham Knight. I'm the kind of gamer who feels an obsessive desire to finish every game to 100%, uncovering every single item and secret, and I did so in both Asylum and City. But in Arkham Knight, the time and patience commitment to finish the Riddler stuff is just too much. I spent, no joke, about a week trying to wrap all this up after I'd beaten the main story. On day five, I finally threw up my hands and gave up. I'll be honest; this left a bad taste in my mouth and did affect my overall opinion of the game. I'm all for side stuff in games, especially free roam games, but the Riddler stuff was just too much. If there is ever another Arkham game, I hope they will continue on with the Riddler missions, but streamline them to make them fun again, not just pointless busy work.

Overall, Arkham Knight is a truly great game and easily one of the best this year. Developer RockSteady has perfected not just the Batman game, but the superhero game, and this fourth title in the series proves that. The story is compelling, the presentation is unbelievable and, as always, the gameplay is spot-on; the title "Arkham Knight" could have easily been replaced with "Batman Simulator 2015." The excessive Riddler nonsense and the overuse of the Batmobile keep the game from being the best in the series, but a perfect game and a near perfect game are pretty much equal when it comes to where you want to spend your time and money. Expect Batman: Arkham Knight to top nearly all the Game of the Year lists that are just around the corner, and know this: No PS4 or Xbox One library is complete without this game. It's just that good.

Final Rating: 96% - Not even the Riddler could ruin Batman's PS4 debut.