LEGO The Hobbit shares more than just its storyline with the The Hobbit films - it's a lot like LEGO The Lord of the Rings but still has its own character, and it's only two-thirds complete. Rather than spoil a movie that's still more than half a year from release, LEGO The Hobbit's story ends where The Desolation of Smaug did and will finish it through DLC that will be released after The Battle of the Five Armies hits theaters.

If you've played LEGO The Lord of the Rings, then the gameplay in LEGO The Hobbit will be familiar to you. The game takes place on an extensive map of Middle-earth that stretches from Hobbiton to The Lonely Mountain and Erebor that's filled with quests, puzzles, and plenty of LEGO objects to bash. A day-night cycle adds an additional dynamic to the world, as some of the quests are only available to play at night. The story-based missions are doled out piecemeal across the map, usually acting as gatekeepers to open new parts of it. So while you're free to explore the map between story levels, you won't be able to make a beeline to Laketown from the start. The story missions are all based on sequences from the films with only a little narrative exposition to introduce them and not much else to connect them. The game assumes the you're quite familiar with the films, and since the films depart from the book, familiarity with it and not the movies will leave you a touch confused at times as to just where in the story that you are.

The story missions do manage to put the trademark LEGO sense of humor to good use in putting a fun spin on the movie scenes they emulate. There's also enjoyment in seeing those scenes recreated in LEGO in the first place. There's a good variety of gameplay in these missions - battles, chases, and more - and there are always plenty of puzzles in each, many of which will require the cooperation of another player (or the AI can be a stand-in for one if you're playing solo). Like in previous LEGO games, you won't be able to find every hidden secret packed into these levels on the first play-through since finding them will require the special skills of characters that won't be on your roster at the time. You can always go back and replay the missions in a free-play mode, and the second time through you'll have access to the full roster of characters you've unlocked in the game so far. This certainly helps you to get more playing time out of the game, but it's also admittedly quite fun to unlock a character with a new skill and then go back to the story levels and see what new things become available to you. 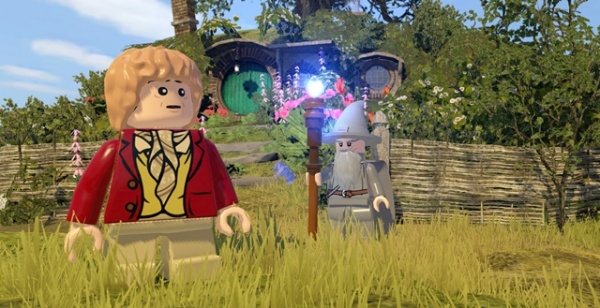 The game emphasizes teamwork more than previous LEGO games, which will require you to make full use of your entire company of dwarves. Each dwarf has a special skill that is used to interact with things both in the story missions and while roaming the open world. A bow to fire arrows at special targets, a pickaxe to mine special minerals, a war hammer to move large blocks, ... those sorts of things and more. You'll be dwarf-switching quite a bit in the game and at first it will be a bit of a chore figuring out which dwarf has the right skill for the job at each obstacle you encounter. To be honest I have a hard time keeping all of the dwarves' names straight, but before too long I could match each dwarf's headshot to each skill and quickly select the right one for the job.

Teamwork also comes into play in the various ways that the dwarves can "buddy-up" to compensate for their lack of stature. You can link any two of them (and Bilbo, too) to fight as one and deliver more damage to larger enemies or to smash through large, breakable LEGO objects. Dwarves can also stack-up totem pole style to allow their compatriots to climb up to otherwise out of reach ledges, or form a swinging chain of dwarves to help the entire party to cross a gap.

If you've played a LEGO game before then you're familiar with the exercise of smashing everything that you see to collect the LEGO pips left behind that are used to unlock additional characters for play. LEGO The Hobbit adds additional incentive to vandalize Bag End and Rivendell in that smashing some LEGO items will yield crafting ingredients. These ingredients are used at special crafting stations to unlock a building mini game in which pieces come falling rapidly onto the screen to build an object, periodically pausing to have you locate the next piece needed. Luckily you can select the correct piece from a wheel of possible choices rather than having to grope around for it on your living room rug or under the couch. The faster you select the correct pieces, the larger your LEGO pip bonus at the end of the mini game.

The craft stations often act as gatekeepers, blocking the way to a story mission and in turn a new part of the map. This means that if you're the type of player who's always sprinted your way through LEGO games without taking the time to do a lot of smashing, then you're likely to hit a few roadblocks along the way. I've also been an incorrigible smasher in these games, so I rarely found myself short on ingredients when I encountered one of the crafting stations.

I enjoyed my time with LEGO The Hobbit, although I have to say that overall I enjoyed LEGO The Lord of the Rings a bit more. I find the decision to release the game more than half a year before the final film odd, since it's essentially an incomplete game that you won't be able to finish until the film trilogy concludes. I know that it will be hard for me to pick up where I left off without an awkward adjustment period of trying to remember what was going on in the game when I last played it. There's no reason to recommend not buying the game if you're a LEGO game enthusiast, but you may want to hold off on it until you've seen The Battle of the Five Armies and LEGO The Hobbit is actually a complete game.

Final Rating: 82%. A fun trip, but it only goes there and not back again.