The short review of Cozy Grove is that it’s in many ways similar to Animal Crossing, but focused on altruism instead of consumerism. If you have a Switch and have played Animal Crossing New Horizons over the past year as many Switch owners have, then you already have some idea of what to expect from the game. Don’t worry, though, I’m not going to leave you Switch-less PlayStation gamers in the dark, though, so let’s begin at the beginning.

Cozy Grove puts you in the role of a Spirit Scout. Spirit Scouts are attuned to the spirit world and help lost spirits who need a little help and guidance to move on. You’ve been sent to an island as a final exam of sorts, but a series of mistakes and mishaps has delivered you to the wrong island, lost your ride home, and delayed any rescue from your predicament. Cozy Grove is an island that the Spirit Scouts consider to be far too haunted for a beginner, so you’ll have your work cut out for you. Left alone with only your sentient campfire for guidance (and the occasional letter from your scoutmaster delivered through the spirit world’s mail service), you’ll need to find and befriend the spirits on the island and help them to recover their memories of their former lives so that they can be at rest.

You’ll soon encounter your first spirit after landing on the island, but you won’t have anything to be afraid of; the spirits on this island are friendly bears shaped like ice cream sandwiches. Through conversations with this first sprit and the other spirits you find, you’ll be given tasks to perform that will help them to regain their memories from life so that they can discover what is preventing them from transitioning to the spirit world. These tasks are all of the fetch quest variety – find lost items or find and collect the materials needed to craft what they’re looking for. Each completed quest will come with a reward, and many of them will restore part of the spirit’s memory. Complete a memory and you’ll unlock a comic page styled representation of the memory to view. Complete them all and you’ll have succeeded in your task to help the spirit. 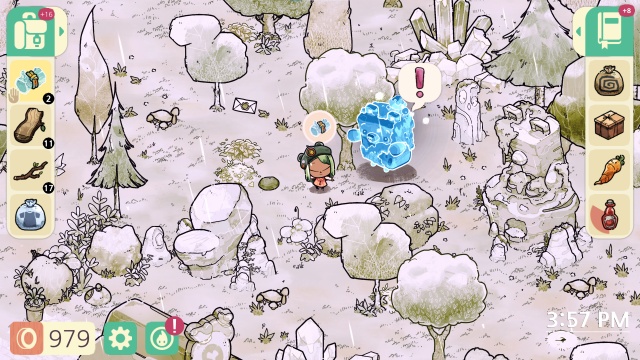 Completing quests can also reward you with a spirit log. These are the logs that fuel your campfire companion, and once you feed it a certain number of these logs it will find new spirits on the island for you to help. In this way, the spirit logs effectively function as a quest log (groan) for you to complete to unlock the next chapter in the story.

Helping spirits regain parts of their memories also helps to restore the island itself. Cozy Grove’s trees, rocks, and other features are partially trapped in the spirit world as well. While they are, they appear gray and you can pass right through them. Restore part of a memory and the color begins to return to part of the island. And with the color the objects regain their physical form, allowing you to use them as sources of resources. You can also obtain and craft special light sources attuned to the spirit world and place them in a chain to extend the light further out into the island. 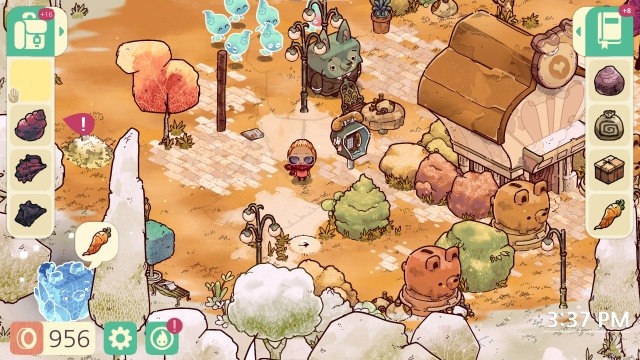 You’ll need to light up as much of the island as you can because obtaining resources is critical to helping the spirits. At first their needs are satisfied by items that can be obtained through simple fetch quests. You can find what you’re looking for sitting on the ground or under a patch of leaves, and the spirits will provide you with a clue as to which part of the island to search or what landmark to look for. Before long things begin to become increasingly complex as you’ll need to obtain a set number of items, and soon those items will need to be crafted from a number of other items. When you reach this point, the game really begins to bog down. You have a limited amount of storage space in your pack and back at your campsite, and the slots will soon become filled with ingredients that you can’t do anything with because you’re missing some other critical ingredients that they need to be combined with. Tracking down the missing items, and in the required quantities, can take some time and the time spent trying to do so quickly begins to feel tedious. Things are further complicated by the fact that the game is designed to be played in a single short session once per day. Some items won’t be available again for another day and some can only be obtained on certain days, leaving you with tasks that will literally take you weeks to complete.

That’s part of the idea, though. Cozy Grove is really designed to be the game that you drop into for twenty minutes or so a day. In addition to the extremely long crafting chains, the spirits will only give you so much to do in a day before telling you to come back tomorrow. Although the game can be found on home consoles, it’s really a better fit for the phone and Switch platforms that it also appears on. It was fun at first to treat the game as a sort of gaming digestif, enjoyed after an evening of shooting things in other games to wind down peacefully before bed. However, the inventory bloat and crafting complexity quickly began eating into the relaxation time as more and more time was spent sorting through quests, recipes, and inventory to figure out which items you needed to collect that night. Soon, relaxing with Cozy Grove simply becomes too much work.