Natsuki Chronicles is a side-scrolling shooter in the genre alternative known as shmup or bullet hell. The target of all of those bullets is Natsuki Sugiura, a rookie pilot in a police force, the RDF, that handles crime by blasting criminals out of the sky. She’s initially gung-ho for her new career, but begins to doubt the methods of the police organization she’s become a part of. I know there’s more to the story than that, but I don’t know what it is. The game conveys a significant part of the story through radio chatter during the battles, but unfortunately does so in Japanese. There’s English text for translation, but it’s tucked away in the upper right corner of the screen away from the action, and the last thing you need to do in a bullet hell shooter is to take your eyes of off the ships attacking you and the bullets they are laying across the screen just to keep up with the conversations. That being said, this isn’t a genre known for its stories and gamers certainly don’t expect to find much of one when sitting down to play a shmup, so the loss of the narrative in the game’s story mode isn’t a deal-breaker. Aside from the narrative, the real difference between the story mode and the arcade mode comes down to how your ship acquires its weapons. Otherwise, the two modes are essentially the same.

The game isn’t shy about throwing enemies at you from all directions, and while they primarily enter the screen from the right as the background scrolls to the left, they will quite often attack from the other three edges of the screen. Most enemies will launch streams of bullets across the screen, but you’ll also have to contend with missiles, beams, and other threats. As with all schmups, survival depends on anticipating where the gaps in the onslaught will appear and maneuvering into them while never letting up on the fire button yourself. 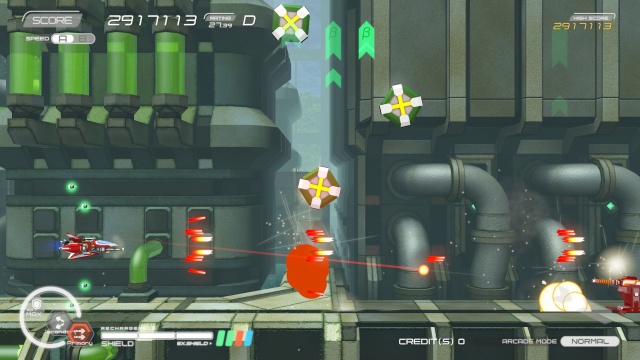 Your ship comes equipped with three systems – forward and rear firing weapons and a shield. The forward and rear weapons can be fired simultaneously, but their firepower is reduced when they are fired together. The shield has a limited capacity, so it can be used as a desperate last measure but not to gain extended invulnerability. You’ll earn credits while playing through the story missions that can be applied to upgrading your weapons or purchasing new ones. Before each mission you’ll be able to arm your ship with weapons selected from your unlocked arsenal, so you can pick your favorites or try to tailor your weaponry for the types of enemies you’ll be facing in the level. The weapons all have different firing patterns or projectile type, e.g. particle or beam, so your choices will definitely affect the way you’ll need to play when they’re equipped. The shields also have their own characteristics, such as which side of the ship they provided the most protection to.

Natsuki Chronicles is a challenging game, and you’ll find yourself having to grind some of the levels until you can get a strong enough weapons loadout to make it through to the next one. The game provides optional assists for newcomers to the genre or for those who are simply having trouble with the game. Directional arrows will appear on the sides of the screen to indicate where enemies are about to enter and guidelines will emanate from the lead projectiles to show you the path that they will take. While these assists can certainly be helpful, they make a crowded screen even more so, making it even trickier to keep an eye on everything that is happening. 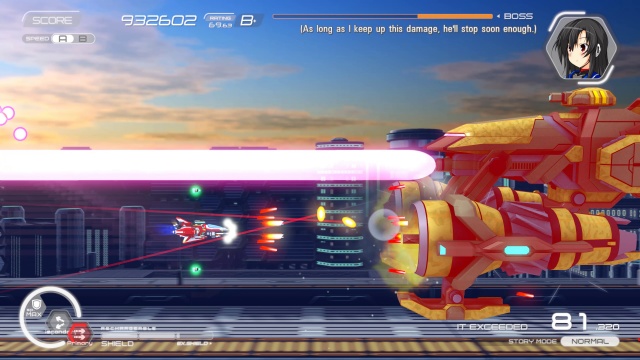 I found Natsuki Chronicles to be more challenging than most shmups I’ve played, and I think there are a couple of reasons for that. The first is the size of your ship. It’s bigger than your typical shmup ship which means that there is less room for you to maneuver. This essentially shrinks the size of the playing field. The other is that the game features highly detailed backdrops. It isn’t that hard to miss seeing a projectile passing in front of an office building’s windows as that building goes speeding past. Lastly, the bosses that await at the end of every level are also large and there’s not a lot of screen room available when you fight them while dodging their special weapons. And if you fail, there’s no option to continue. You’ll need to start the level over again from the beginning and fight your way back to the boss to have another shot at it. This is another reason you’ll find yourself replaying the levels a lot. Boss fights have more than one stage, and they usually have new weapons and tactics in each. By the time you’ll see what is coming next, your ship will likely be weakened and you’ll have no margin for error.

In spite of the game’s assists, I wouldn’t recommend it for someone new to the genre. It will simply be too difficult and frustrating for anyone who doesn’t come into the game with some shmup skills on their resume. Shmup veterans will have a better go of things, but will find themselves challenged for the reasons that I’ve outlined. I wouldn’t call Natsuki Chronicles a “must play” for fans of the genre, but some will find the visuals and ship customization an interesting change of pace and will enjoy checking the game out.

Final Rating: 77% - A tough shmup, but not necessarily for the right reasons.