In Gods Will Fall, the gods of a Nordic-like race have worn out their welcome. The people have had enough of their demands and growing cruelty, and have sent their warriors to the island where the gods dwell to slay them all. Only a paltry eight survive the journey to the island, and you must lead these warriors to slay the gods one by one.

The game is essentially a collection of rogue-like dungeon runs in which you select one of your eight warriors, send them into the entrance of one of the god’s realms, and try to lead them to the end to slay the god. Should that warrior fall in battle with the god, or somewhere else along the way, that warrior is removed from your party. If one of the other warriors manages to defeat the god, then any of the warriors who fell within that realm will be returned to your party. 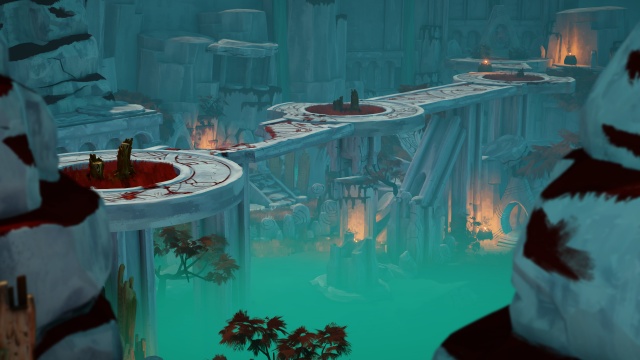 Each time you play the game, your party of eight is randomly generated. Each warrior will be given a name, a few basic stats, a primary weapon type, and a personality quirk. The stats and weapon type have a direct effect on how you will have to handle your character in fights. While the combat mechanisms are pretty basic – light and strong attacks, parries – how they are employed will vary depending on your character. A slow mace-wielder can deliver severe blows, but is vulnerable to fast attackers. A quick spear-wielder can keep enemies at a distance while attacking them, but can quickly find themselves in trouble if an enemy can get within the spear’s attack radius. The stats can be modified by the character’s personality. For example, a warrior entering the realm of a god they fear can find their stats lowered, while another may be given a boost if sent in to avenge the loss of a close friend.

The game also gives each warrior a bloodlust ability which is its mid-realm healing mechanism. As a warrior lands attacks on enemies, a bloodlust meter is filled. Once enough bloodlust has been accumulated, it can be unleashed with a roar which will refill some of the warrior’s depleted health. While this may sound like it effectively gives you an infinite supply of health potions, in practice you’ll only be able to use this ability a small number of times during a run.

The gods’ realms are occupied by a small handful of enemies, but you should take the time to fight them rather than making a beeline for the boss, i.e. the god of the realm. When you enter a realm, you’ll see the god’s health bars at the top of the screen, and each enemy that you defeat will deplete some of the god’s health before you face it. 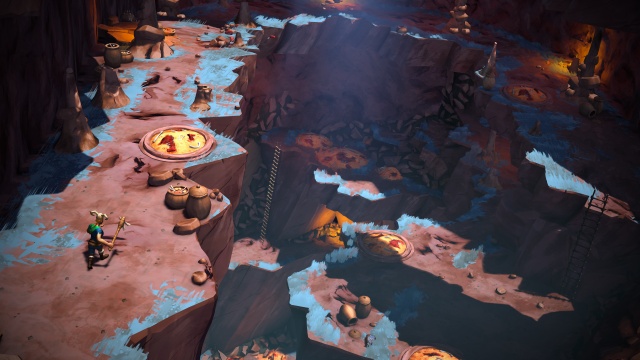 While this may all sound intriguing, there are a number of issues with the game from both a design and execution perspective that take if from an interesting concept to a frustrating game. The power of the gods is randomized each time you play, so you have no idea where to start out with your new, Ill-equipped party. To find out how powerful a god is you’ll have to enter its lair, and once you do you’ve committed that warrior to seeing it through to the end or dying trying. Send in another warrior and you’ll find that everything has been reset, so essentially the first warrior’s death was in vain. You can cut your losses and try a new lair, but you’ve got eight warriors to defeat ten gods and the math is decidedly not in your favor. When you do decide to go all in on a god, the total reset between incursions after a death isn’t your only problem. Since the different weapons play so differently and the warriors stats are random, you can’t work towards any kind of consistent rhythm in the combat – a problem further exacerbated by slow and clunky controls. You can’t really learn from your mistakes when the game changes on you after each one. And lastly, the realms are just plain bland. There’s not much within them, enemies are scarce, and there’s nothing to explore off the main path or rewards for doing so. While hunting for the few enemies has its benefit, you’ll feel like skipping that part simply to get to the more interesting boss fight is a worthy trade.

I enjoy the challenge of rogue-like games, but Gods Will Fall feels more frustrating than it does challenging. The game’s design really stacks things against you, to the point where it just doesn’t seem worth the effort. You’re better off seeking challenging gameplay entertainment elsewhere.

Final Rating: 58% - Gods Will Fall is hampered by design decisions that make the game more frustrating than fun.