9 Monkeys of Shaolin is a 3D old-school beat’em up developed by Sobaka Studio. If you’re familiar with Redeemer, this game is developed by the same studio. Players take on the role of Wei Cheng, a simple fisherman, whose village is attacked. Wei’s family and friends are killed and he seeks vengeance on the pirates that attacked his village. Wei already knows the basics of martial arts and trains to become a master of Shaolin to exact revenge upon the pirates. Along the way, he meets new friends and enemies.

One of the first things that I noticed when starting this game is that the controls are very solid. The feedback for button tapping and movement is instant and crisp, which is one of the most important factors for a good beat’em up. For attack buttons, you have three basic attacks which are Kick, Strike, and Thrust. For defense, you have a dodge button and a deflect button. R2 and L2 serve as modifier buttons for Southern Elements and Ground Seals special abilities. The directional pad is mapped to tea pickups that you’ll find. 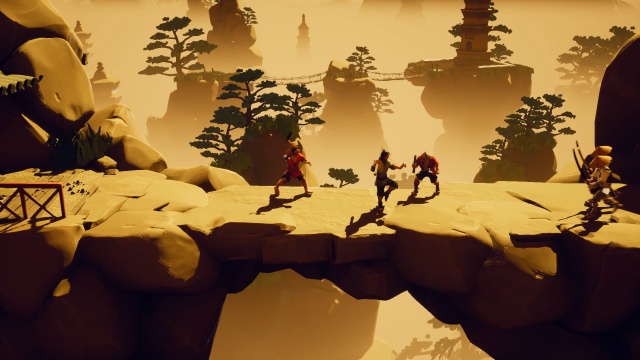 The main basic attacks each have their own unique properties that help for certain enemy types and are weak against other enemy types. For instance, your kick is long distance and is most helpful against enemies that do not wear hats, while your thrust attack is most useful against enemies that have armor properties during their attacks to which strike attacks don’t work as well against. Some thought has to go into the way you face off against each enemy type and what happens once you get too crowded. Thankfully, the dodge button is there to bail you out of tough situations with a flip in the direction that you hold. Deflect can be used to deflect attacks or it can be used to reflect enemy projectiles. Southern Elements and Ground Seals are special attacks that take away from your special meter. Southern Elements are more powerful attacks with unique properties (such as armor breaking) and Ground Seals inflict status ailments on surroundings enemies (such as lowering defense). Southern Elements and Ground Seals aren’t received until later in the game.

The game is quite a challenging beat’em up to learn from the start but once you unlock more of your arsenal of attacks and upgrade them it becomes much more manageable. You’ll be facing off against Chinese and Japanese warriors and there are some spiritual enemies. Enemies range from your standard grunts to enemies with armor attacks. Each enemy has their own gimmick as far as attacks go. Some enemies have shields that you’ll need to find a way around. The main difficulty of the game is the mixing of the enemies in crowds and it can get quite overwhelming early on. The game also has bosses at the end of each chapter. Bosses all have their own unique attacks and battle sequences.

Shaolin definitely shines when it comes to variety. You’re constantly learning new attacks and facing new foes in each chapter. The stage variety is also really good! There are very few stages that look the same. Some stages take place in caves, some in grassy areas, some in towns, some on docks and there is much more stage variety to see as well. Most stages are your basic “defeat all enemies” but the game does change it up sometimes with missions where you’ll have to save hostages or find certain items and get to actually explore the stage rather than run through it. 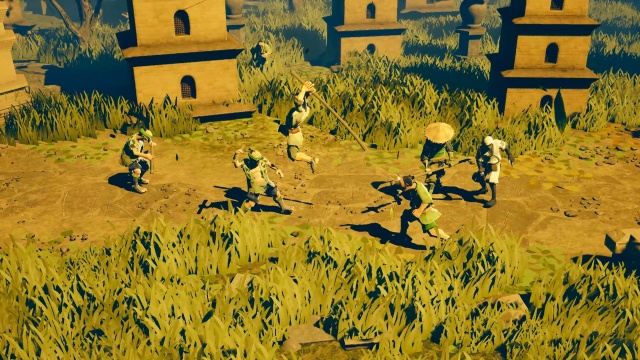 If you’ve played Mark of Kri or Rise of the Kasai, the game reminds me a lot of that graphical style. The graphics have a simple yet stylish look to them. The animation is very smooth, much like Mark of Kri. In between stages, the game has cutscenes and spoken narrative. All dialogue in the game is voiced, which is a major plus for a small game such as this one. The characters voices are well done and help the flow of the story to make it more interesting by adding personality to characters.

In between missions, you’ll arrive at a building or another location to change equipment and choose new missions. From this area, you can also choose to play online or locally with another player. As you complete stages, you’ll gain experience that you can use to level up your character’s moves. All moves can be upgraded and different attributes and bonuses can be unlocked through experience. Your character also has different weapons and other items to equip that can be changed for bonus attributes. There are also secrets to find in stages that give you bonus options to choose from such as new skins or cheats.

Overall, 9 Monkeys of Shaolin is a very solid beat’em up. The only true flaw that I find is that, even with all the variety, the game can still get repetitive at times. It can feel a bit overwhelming once you start to unlock the modifier attacks because of all the different buttons you’ll be pressing, but there are combinations that seem to be the “go to” combinations for most battles – mainly hard-hitting armor breaking attacks. I definitely recommend this game to fans of beat’em ups or anyone that enjoys games that take place in ancient China (Dynasty Warriors fans!).

The Bad:
- Even with good variety, the game still gets repetitive at times