Nickelodeon Kart Racers released in 2018 to a mixed-to-negative reception. It was criticized for its underwhelming roster of characters, lack of content, and generally generic feel. Developer Bamtang Games clearly took these shortcomings in mind, resulting in Nickelodeon Kart Racers 2: Grand Prix - a vast improvement over the original. While any inkling of voice acting is still distractingly non-existent, there is plenty of fun to be had for kart racer players and Nickelodeon fans of all generations.

The roster size is more than double its predecessor’s, with a whopping 30 different ‘Drivers’ to play as. This cast of characters spans animated shows belonging to all eras of Nicktoons - from Ren & Stimpy to The Loud House. Sure, the Teenage Mutant Ninja Turtles are clones of each other, but this is to be expected with most crossover games (equally as heinous is, ahem, Smash Bros.) I was personally ecstatic to see the respect shown for Invader Zim, with the titular alien and his robot minion GIR both being playable. If Snap from ChalkZone and the Angry Beavers were on here, it’d be a perfect cast, but I can live with those omissions. Alongside the unique kart designs and special stats for each character, this is an impressive ensemble. 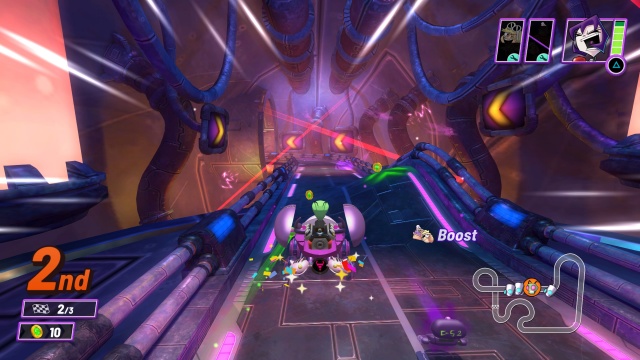 There are also many more tracks - a healthy number of 28 (alongside two ‘Arena’ maps) - each themed around a specific cartoon. For instance, a few belong to Avatar: The Last Airbender and others to Rugrats. A couple of tracks are remastered from the last game, and while the removal of the Conch Street course (‘Bringing it Around Town’) is saddening, both the look and layouts of these new locales are much more superior. Sure, they don’t have much of the difficulty or pathways as other kart racing games, but their simplicity is welcome. The music for the races is more hit-or-miss since background music of mixed quality and suitability will play instead of the theme songs you know and love. Overall, though, the familiar settings are a joy to drift through.

When you’re off to the races, the game does a decent job of delivering high-octane driving action. The mechanics are quite unique and utterly Nickelodeon. For you see, ‘Slime’ is the difference between winning and losing. When you drive through what is seemingly ensnaring gunk, you’ll find that it is actually a miraculous sludge that does not slow you down. Instead, these bright green puddles will power up your ‘Slime Bar.’ When filled, you can activate your assigned ‘Chief Skill,’ which is a special ability such as a speed boost or an attack. For more speed boosts, you can pull off ‘Slime Stunts’ that execute cool animations mid-air when you press L1 on the edge of a ramp. 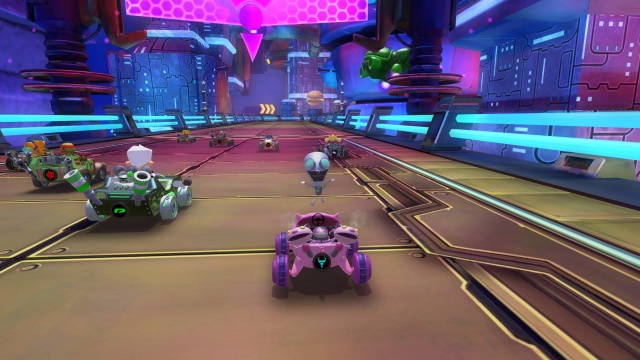 Maybe they have tacos

Drifting also yields its own mini speed system. If you can steady your handling long enough, your vehicle’s nitro turns different colors, with blue sparks granting the best boosts. It introduces an excellent risk-reward factor since some of the turns are hard to execute. Then there are good ol’ powerups that, when picked up, randomly scroll through items with purposes reminiscent of a particular Nintendo game (Gnomes are like Bananas, etc.) Even if derivative, the gameplay has enough fluidity, custom features, and polish to make most matches a bubble-powered blast to play.

Before every match, whether single-player or multiplayer, you get to customize your stuff. The ‘Engine,’ ‘Wheels,’ and ‘Exhaust Pipes’ can all change your stats radically, ranging from top speed to steering efficiency. My favorite part of the preparation was choosing my ‘Crew’ members. As aforementioned, there is the ‘Chief,’ who is responsible for your Slime Meter. Then there are two others - the Crew ‘Mechanic’ and ‘Engineer,’ While both roles are interchangeable, they act as perks of different kinds. You could create an Attack-heavy build where your Crew gives you more weapon items or a Support-focused setup that grants extra Slime. The best part about this is that the Crew members are secondary characters from your favorite shows, and each of the character portraits is wonderfully drawn in their shows’ distinctive art styles.

The essential 4-player split-screen gameplay is here so that you can organize friendship-destroying tournaments. And, better yet, there is 8-player multiplayer matchmaking - an addition sorely requested in the original. As for single-player, you have six sets of ‘Challenges’ that eventually pit you against a “boss” which happens to be a new Driver to unlock. In fact, with every playlist of races (‘Slime Grand Prix’) and Challenge beaten, you will unlock new Crew members, as well as vehicle parts and paint jobs. The latter can be purchased in the ‘Garage’ with ‘Slime Tokens,’ collected in-game. This system is advantageous - losing doesn’t even feel like a chore because you’ve already collected a lot of currency. It brought me back to my childhood completionist days - I wanted to unlock everything. 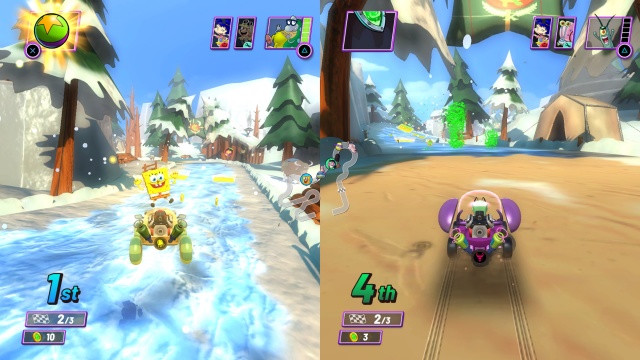 My kid self would have loved the overall game but, like myself now, hated the complete absence of voice acting. This was one of the major pitfalls of the predecessor, which is unfortunately the case again. There must be a licensing issue because not hearing a single sound coming from any of the characters leaves a distracting void. Graphically, the game is nice enough, if a little dated by the advent of a new console generation. Character models are detailed although the Avatar characters seem a bit off. The animations shown on the top three podia fit well with the characters’ personalities. If the game were like older licensed titles and reveled in a bit more presentation and audial charm, this would garner a cult following similar to Battle for Bikini Bottom. Until then, you could play the game on mute and not miss out on much at all. 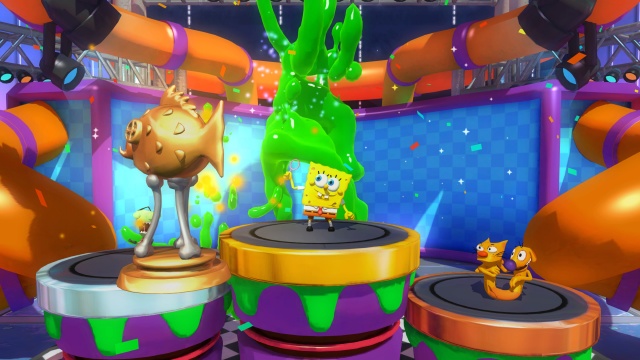 It’s all in the technique

Nickelodeon Kart Racers 2: Grand Prix is an applaudable improvement over its original and an awesome arcade racer. While the complete lack of licensed music and voice acting endows an empty feeling, charming visuals and tons of callbacks should whet your animation-loving appetite. All-in-all, it’s an unadulterated trip down both memory and (literally) slime-filled lanes and a joyful celebration of Nicktoons.

Final Rating: 75% - Are you ready, kids? Well, rev up your engines, get those pulses racing, and play as a Nicktoon in this sweet ensemble racer.