Street soccer is underrated and continuously overlooked, especially in the video game world. Street Power Soccer attempts to showcase this sport's pure but straightforward nature but unfortunately fails to be the revival of interest we had hoped for. With odd power-ups and even stranger design decisions, this arcade hybrid misses the goal post and then some.

A “Story mode” exists in the form of ‘Become King,’ a mode where you will need to fulfill challenges and win matches to progress. Welcoming you to your journey to becoming the ‘Street Power King’ is Séan Garnier, a real professional freestyle footballer, but he mostly gives motivational speeches about his career and passion for the sport. While this is all well and good, he barely talks about the actual video game. If taken out of context, you'd think this was a documentary about the guy. The choppy green-screen effect, incongruous voice-syncing, and lack of pauses between sentences tops off these oddball segments. 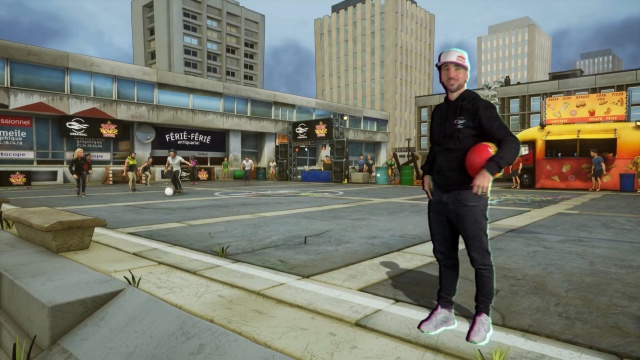 You’ll be introduced to all of the modes in Become King. There’s ‘Panna,’ which is a 1v1 match where points are earned by scoring goals and executing nutmegs (kicking the ball between an opponent’s legs.) The latter move is made by filling up your power meter and initiating a quicktime event that you and your enemy engage in. It’s silly fun, but seeing the same lame animation gets wearisome. At least knowing when to shoot for a goal requires judgment because you risk giving the ball to the enemy, although the button prompts are all that matters at the end (nutmegging gives you double points.)

Speaking of pressing stuff at the right time, there is also ‘Freestyle.’ Here you’ll have to perform a set of tricks. You can think of this as Just Dance if it were stripped of all kinetic energy. You just stand in one place and string together combos while barely keeping in “rhythm” with a selected song. Speaking of which, the soundtrack could have been much worse. Besides a couple of tracks of expected generic rap drivel, there are songs from Black Eyed Peas and Snap's likes. This is a silver lining - you have a tune to listen to while going through the motions. If you spam the same moves enough, you should earn a good score, but not much else of worth. But hey, the animations here are better than the ones mid-game. 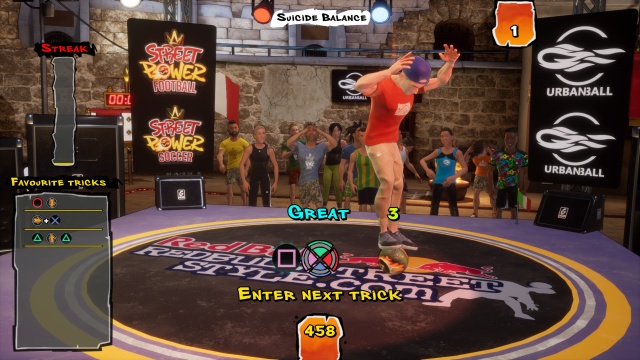 Street Power Soccer admirably includes another arcade-centric addition to the suite, but it fails to tackle it correctly. This other ineffective mode is ‘Trick Shot,’ which has you destroy various pieces of street furniture. You’ll need to line up and aim towards sofas, cones, etc. Once you land a shot, you get rated within a few different factors. I cannot say it’s satisfying though - even when most items explode upon impact. While finally lobbing a ball should feel good, the process of getting there is frustrating and enervating. It isn’t just the sticky controls - it’s the inertness that fails to emulate trick shots' energy.

The main matches should be your primary draw. It is your typical team-based match-up with an isometric camera angle and urban sports action. You can perform tricks, tackle, pass, and shoot just as expected. Goals are small, so an automatic aim system allows things to be less precise and more fun. Chipping to a teammate and performing a bicycle kick is a pretty cool feeling, admittedly. There is also the titular ‘Street Powers’ that mixes things up, allowing players to perform a ‘Superpower’ which almost always guarantees a goal. Various obtainable consumables appear randomly throughout the court, too, adding to the welcome fantasy element. While the footballers play in a floaty manner and things get messy with three (I recommend two or lower) teams, at least it’s slightly adequate. 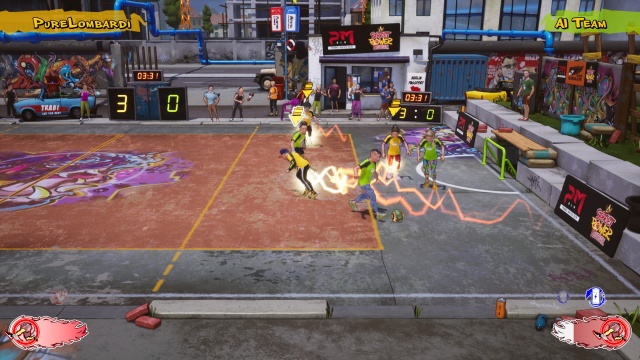 Besides the controls and theme, Street Power Soccer also nods to the FIFA Street series in terms of art style. It brings to mind the 2000s entries of that EA series, but it’s not all sunshine and rainbows. There’s a weird sense of realism to the faces that undermines the cartoonishness, and some players oddly have a permanent facial expression that seems unnatural. Ball and goal effects are also underwhelming, and I just think that more could’ve been done with less (as is the case with stylized graphics). Environments seem to breathe more life, though, as evidenced by cars driving in the background and sweet views of diverse urban locales (Rome, Brazil, etc.)

There are customization options that give you a much-needed incentive to play on and earn credits that you can use to change clothes, emotes, and more. There’s also casual online play with, unfortunately, no public matchmaking. In this case, share play should suffice. 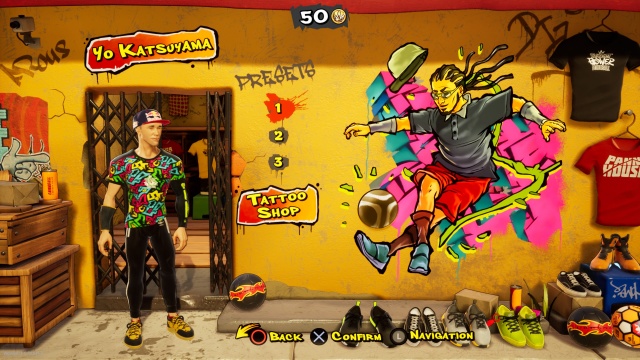 Time to spend some credits

I wanted to like Street Power Soccer, but I just couldn’t. The jerky animation, unrealized art style, and generally wonky gameplay are not compatible with this sport’s fluid energy. I’m not mad about freestyle soccer whatsoever, so you may find more to like if you are into it. Just don’t expect the new FIFA Street.