Cubers: Arena is one of those games that does what it says on the tin. That is, it is an arena game in all the ways you'd expect it to be. That's okay, though, because Cubers: Arena is an entertaining brawler that offers excellent local/share play opportunities for an addicting cooperative grind. Going solo is fine, too, but don't expect the game's repetitive nature to keep you sticking around for multiple playthroughs.

The game is set in a world where most beings are cube-shaped. However, you play as Baller, a ball-shaped slave forced to participate in a gladiator tournament to win his freedom. There's little to no story here, and the ball's journey could've been expanded upon just that teeny-weeny bit to make the action a little less senseless. Therefore, if you are looking for something with narrative and/or thematic meaning, you will find nothing. 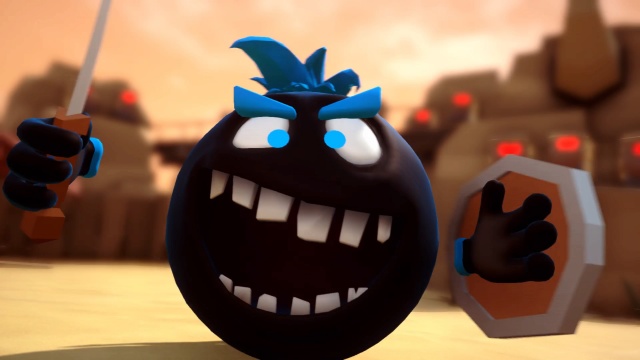 This is an isometric slasher that focuses on swift, skill-based action. You have four skills split into four categories - movement-based abilities, special melee attacks, stat boosts, and summons. Alongside these, you have your typical normal attack and blocking actions. One pivotal part of picking your playstyle is choosing weapon type - either two-handed or sword-and-shield. With a two-hand, your block is a counter that parries enemy damage by 50%. On the other hand, shields prevent all damage entirely, and it can also deflect projectiles. To be honest, I felt a little cheated being a two-handed player unable to perform deflection, but at least the game gives you a choice between an attack- or defense-focused playstyle.

From the get-go, you are introduced to the quirky combat. Once deployed in an area, the organizers of the tournament will unleash a wave upon you. From the gates, enemies will swarm quickly, and you will be surrounded if uncareful. Hordes can be filled with weaklings that appear in large groups, medium-build enemies with shields and summons, or hulking juggernauts that deliver burly blows. These are balanced by speed and strength, and you will become well-acquainted with the various enemy types as they appear. Ranged mages and spear-throwers are easily discernible from the miniature minions, even if the camera is far away, and the battlefield becomes replete with chaotic visuals.

In the 'Campaign,' there are four stages. Each stage has nine levels, and the first eight have three waves each. The last level of each chapter is a boss fight, and they are moderately engaging. The beastly 'Cubitaur' who gets bigger the more he eats and the Thor rip-off 'Thar' are a couple of fun examples to let you know what to expect. However, the bunch's rotten apple is the final boss, who is severely anticlimactic and elementary in his attack patterns. Overall, though, this quaternary of big baddies achieves that right amount of difference and freshness.

The same cannot be said for what comes before those bosses. Each of the 32 levels is all wave-based levels with minimal variation. Sure, the developers tried to change it up with differing wave difficulties and environments/weather, but the campaign ultimately doesn't feel consistent or diverse enough. This is a shame since there are plenty of game modes available in Cubers: Arena expansive suite that could have spiced up the campaign and its scenarios. 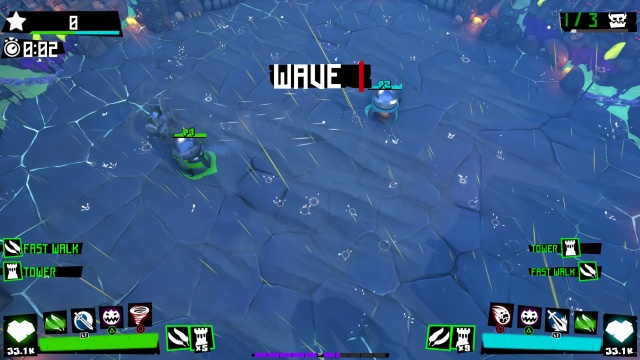 These modes are as follows: 'Time Attack' where you gain time for killing enemies, 'Mushrooming' in which mushrooms need to be destroyed before they corrupt the arena, and 'Defender' where a princess needs to be defended from hordes of zombies. There is also 'Wave Survival,' but this is pretty much the campaign with more waves (and, for some reason, no endless option.) This is a substantial selection to earn additional currency (more on that later), but my favorite batch has to be 'Versus Games.' These are locally and competitively played against a friend - you will compete against each other in sports such as 'Dodgeball' and 'Whackamole.' There are also tests of combat prowess such as in the pit fight 'Sparring' and score-based 'Versus' types. My favorite has to be 'Wrestling,' where two players are on a tilting platform and have to throw each other off.

To access the above content, you need to go to Garoth, who can be found in 'Oasis.' This is your hub world, the place to redeem rewards in-between sessions. In-battle, you earn Gold, 'Battle Tokens,' and Gems. The merchants to spend these on are as follows. Solus is the perpetually dancing knight who offers skills in exchange for Gold. Edin is the blacksmith who operates the Armory - the place to buy/upgrade weapons, armor, and shields. Lastly, Xardis is the mystical caravan man who can allot your discovered gems to equipment sockets. The merchant and upgrading routine is somewhat convoluted. Since you get a weapon unlocked every promotion or so, why would you want to spend precious Battle Tokens on upgrading your current (and disposable) equipment? Also, I mostly always had a ton of Gold, but not many Battle Tokens, so some sort of converter would have worked wonders for the grind.

XP is also earned in battle, and each rank-up will make new equipment/skills available to purchase. Not only that, but the complexity of the game will increase. For you see, Cubers: Arena is simple at first - hold down the square button, and everything should be okay for the first hour of playtime. However, as the RPG system comes more into play, you will need to conceive a build. My style consisted of two passive skills that added passive effects of movement speed and more significant damage, for example. You can also get armor with 'Legendary Powers' that can grant you an extra triggerable/chance effect. There are many combat effects (stun, burn, etc.) and skill set-ups (stacking, cool-downs, etc.) to the point where Cubers: Arena becomes more than just swinging your sword around. 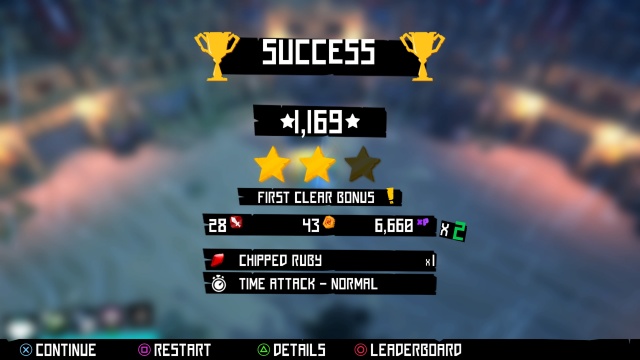 So you want to be an arena star?

There is also an arcade-like aspect at play here. Every arena has a star rating system (out of three), and this is based on your speed of completion, set difficulty setting, and combos. If you efficiently and quickly dispatch enemies in quick succession, the star multiplier shall increase. In the end, your rewards could be doubled depending on the result. Online leaderboards are also available to show everyone who is Maximus in the cubist gladiator world. Eleven difficulty settings also rack up the replay value, although I still think that the campaign's repetitive nature does not warrant many playthroughs.

How about the artistic departments? Well, the game achieves the cube look better than most others. However, Baller's design is a source of conflict for me. I admire how he is the most cartoony of the models, and he looks like the odd one out, but his design is quite harsh on the eye. He has disjointed teeth, has a weird hairstyle, and is jet black (armor and weapon colors are changeable, but not his body.) The environments, however, are all stylized and a pleasure to look at. The campaign will take you across four different areas with completely different themes and feels, and Oasis itself is a particularly attractive place. An ambient track plays, with elegant violins and haunting horns, sounds forming a feeling almost ethereal. Disappointingly, the same can't be said for the generic gladiator music that plays during battles, but the Oasis track will somehow stay ingrained in me. 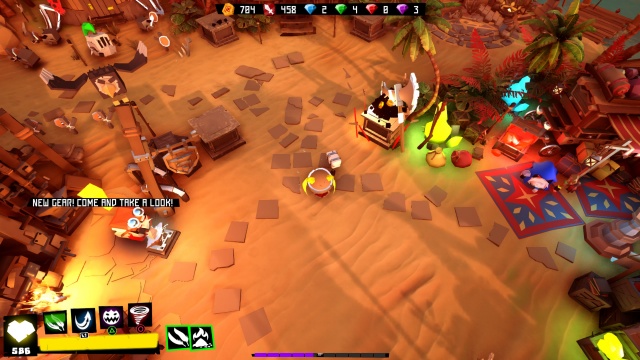 When in Oasis don't miss the Wonderwall...

Cubers: Arena offers a gratifying grind and an extensive arsenal to brawl to your heart's content. It is also one of the most couch-friendly games out there, letting you do everything with a friend by your side. While its structure may wear some players down, the charm of enemies being hurled across the arena by your satisfying swings and strikes cannot be denied.

Final Rating: 75% - Cubers: Arena is not a Minecraft rip-off or lame cube game - it's a solid arena-RPG with a refined indie style and lots of couch play possibility.