After nearly three interminable years of waiting, Cuphead has finally leaped onto the PlayStation 4 platform. The console's catalog now contains the beloved, run 'n' gun indie hit, but is it as snazzy as players say it is, or are its earned accolades a bunch of baloney? Well, I'm keen to share that Cuphead will surely go down in the annals of gaming history as a masterfully artistic arcade shooter.

Cuphead and Mugman are carefree brothers who live in a land called 'Inkwell Isle.' Seeking some fun, they wander far from home and end up at the 'Devil's Casino.' There they start a winning streak at a dice table that captures the owner's attention. The Devil then wagers his casino for the two boys' souls. Cuphead agrees and, despite Mugman's warnings, loses the next roll, seemingly sealing their fates. However, after some pleading, the Devil orders them to collect souls indebted to him. It's a dark plot in a deceptively kid-friendly game, and the dynamic of doing the baddie's bidding is intriguing.

As one of the two playable protagonists, you will battle enemies in a side-scrolling perspective. Your weapon is a finger gun that rapidly fires magical milk from your head (I think?) You can also dash, 8-way aim, and 'Parry Slap.' Parrying and landing shots fill up your 'Super Meter,' which is represented as poker cards. With each card, you can perform an 'EX Move.' If you have a full deck (five cards), a devastating 'Super Art' can be executed. These systems give off that old-school feel of filling up your meter and using precious special attacks at precise moments. 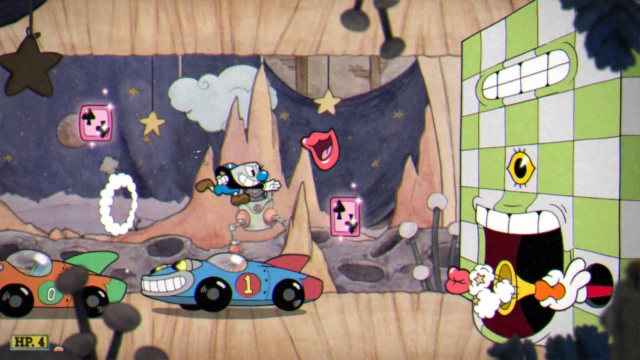 Mugman to the rescue

Before discussing the main aspect, let's cover one part of the game: the 'Run 'N' Gun' stages. These are linear levels that pay full homage to games like Metal Slug and Contra in that you have to rapidly blast your way through minions and jump/parry in lite-platforming sections. At the end of each one, you will face up against a mini-boss. These levels are fun and challenging - if a bit iffy when it comes to the layouts for jumping. There are six of its kind, and they are not necessary for completing the game. While optional, Coins are mostly found here, an imperative component to personalized progression.

Coins are the currency you spend in 'Porkrind's Emporium,' a shop selling weapons and 'Charms.' The arsenal will change what your finger fires - from bouncy balls ('Lobber') to boomerangs ('Roundabout.') They all have varying damage levels and range coverage, too, aspects that should be congenial with playstyle. You can also switch between two weapons on the fly, allowing you to switch up your tactics. Charms, on the other gloved hand, are slight buffs such as granting invulnerability to your dash or automatically filling the super meter. Forming your build requires experimentation, and you may experience some nice "eureka!" moments after arranging the loadout that suits the situation. 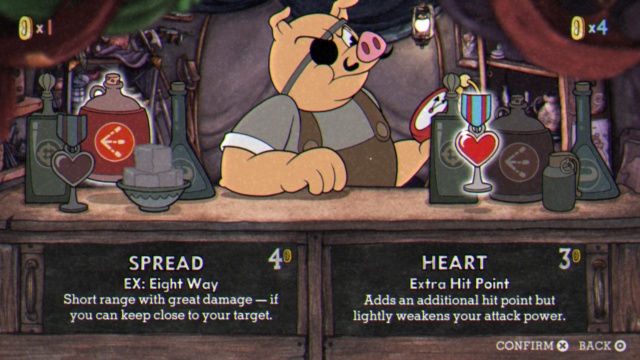 Going to the shop and equipping stuff is all accessed in a top-down overworld. You can also chat with various NPCs who may have hidden tasks for you to complete for an extra coin (a few are also concealed in the environment.) The most important part of the overworld, though, is picking levels. There are three difficulty settings (for the debtor levels) to choose from. Let's start with 'Simple,' a practice mode in disguise, and does not count towards progression. 'Regular' mode is just how it sounds, although it is far from your "regular" challenge. Finally, 'Expert' is unlocked upon completing the game, and has only been bested by 0.5% of PS4 Cuphead players so far... Good luck with that. You can also be judged for your performance, adding an extra layer of replayability for nabbing those desirable high grades.

Now onto the other stars of the show: the bosses. And, oh boy, they sure are something special. One boss alone can have up to an average of a whopping five phases, each with unique attack patterns. As such, it seems like these foes will throw everything they've got at you at first. This means that you will need to memorize every animation build-up, ed radius of attack, and more battle elements. Yet, the game is programmed so that no retry is the same - patterns are randomized, so you will need to work on your instincts and skill. It's an understatement that this brutal blend of complex rhythm and difficulty is a triumph.

As a result, nothing has gotten me so pumped for bosses since the likes of Monster Hunter and God of War. Like those two titles, Cuphead gives you that incredible sense of triumph after finally beating your foe and a sense of scale. While it may take dozens of tries, the payoff is an ebullient feeling that you shall seldom experience anywhere else. It also helps that each battle is a pure, unadulterated spectacle to behold. Every debtor is teeming with personality and energy - from the Betty Boop-inspired 'Hilda Berg' to the bird-in-a-birdhouse 'Wally Warbles.' Even the dozens of sub-bosses that appear in only one phase respectively stole my heart. That's the thing - every enemy, no matter how big or small their role, feels so strikingly charming. 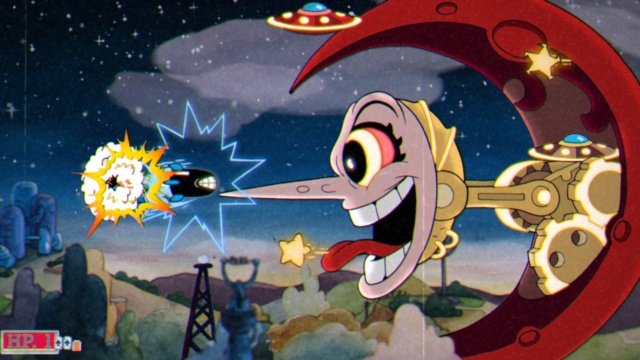 Dropping the bomb on Hilda Berg

Cuphead bases its character design and overall art style on the 'Rubber hose animation' style of American animation in the 1920s and -'30s. As such, the game looks unparalleled in terms of its cartoon style. Each frame was drawn and inked by hand, and one boss alone can have up to an astounding 1500 frames. Backgrounds consist of watercolor paintings and even physical props mimicking the production values of that era and taking cues from the German Expressionist movement. In-game settings give you the option to turn up 'Color Bleed,' which will modify a filter to present you with clean or authentic picture quality (based on your preference.) Overall, it's a stunning synthesis of a homage, and the dynamic drinkware duo of Cuphead and Mugman are the inviting indie icons that encapsulate the charm.

Music is something to holler about too. Kristofer Maddigan composed an electrifying jazz score consisting of a wide variety of sub-genres, including big band, barbershop, swing, and ragtime. These melodies are energetic and help to completely engage you with any battle, or they may chill you out in the playful overworld tunes. If you come back to a boss after losing, a slightly different variation of their theme will play, which is refreshingly neat. Ultimately, the soundtrack sounds lifted straight out of an old-timey animated short and the sound design in general, immersing you into its nostalgic world entirely.

Sure, Cuphead has its slight flaws. Parryable enemies/projectiles are of an odd shade of pink, thereby making such opportunities for a mid-air slap is confusing, especially for color-blind people. Two-player cooperation is also harder than playing solo, as signified by the doubling up of enemy health and the constant worry of reviving your teammate (again, by parrying.) There are also no leaderboards for your performance (although there are grades) or online support, even if share play is good enough. However, these personal wishes barely leave a crack on the cup. If you look at most negative/mixed reviews, you'll notice that they focus on criticizing the difficulty. While it may suck to die after not landing that final hit, failure is part of a fruitful process that will ensure improvement with every game over screen. Struggle is not a negative but a strength for the eventual joy to be had after winning - that is the very nature of a game.

Cuphead is a pitch-perfect ode to a golden age of American animation that will make you pine for the days of the bygone hand-drawn tradition. It is also a stunning piece of shoot 'em up splendor - the boss fight design, in particular, will remain a shining model for all other 2D games to be judged against for years to come. All in all, there's nothing quite like the ceramic siblings' grand adventure - it is one of the most well-realized artistic visions in gaming. 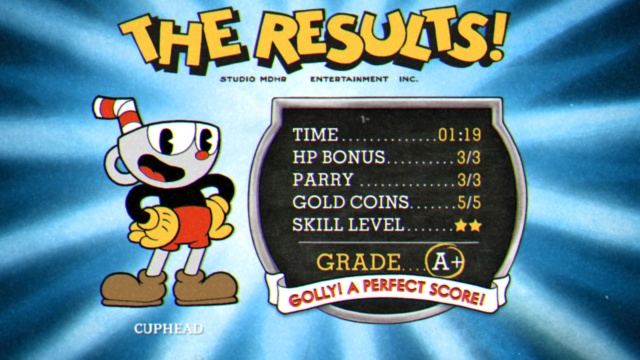 By golly, Cuphead is a swell shooter!

Final Rating: 95% - By golly, Cuphead is a swell shooter and then some! Music, graphics, gameplay - it's got it all! If only the animators Ub Iwerks and the Fleischer brothers could see this great work that they inspired...