Sometimes a game's story, graphics, and gameplay will work in tandem to engender a unique experience. Othercide is one such example, which submerges you into a dark world in deeply indelible ways. From the dynamic turn-based mechanics and addicting roguelite system to the striking art style and world-building, Othercide attempts something different and triumphs with flying (achromatic) colors.

In Othercide, a metaphysical place called 'the Veil' keeps time and space intact, and alternate dimensions apart. This is until 'The Child' fractures the Veil under influence from an old 'Other' called 'Suffering.' Ancient veil protector 'Mother' dies, and her memories give birth to 'Daughters'. With this army of warriors, you will need to stop Suffering's scourge and save the fabric of reality. The story is every bit as perplexing as Dark Souls, and you will slowly understand it by reading well-written pieces of lore collectible throughout. There are also hauntingly beautiful cutscenes that play in each chapter, driving the narrative forward with mystifying momentum. 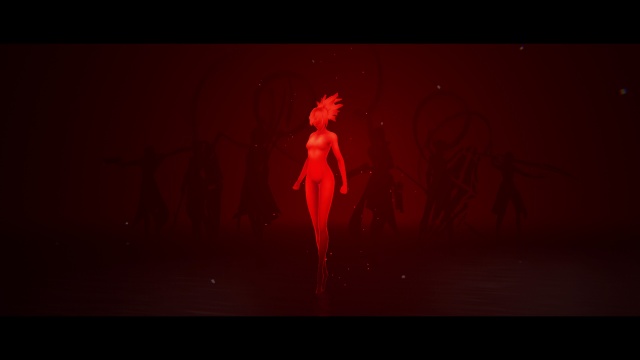 Red Mother and her Daughters

The game is played in the vein of the game XCOM in that it has turn-based tactics with tiles, units, and action points. However, a distinctive feature is in full force - the 'Timeline.' This orders all units (both Daughters and the Other) by their 'Initiative.' The higher this attribute, the later their turn. Once Initiative hits 0, that is when a unit's turn is ready to play. Each Daughter has 100 AP (Action Points) and using your last remaining 50 AP will initiate 'Burst.' This pushes a unit back to dead last (100) on the timeline, and the mode should only be used for a finishing blow or an extra move. This timeline system forms a dynamism rarely seen in tactics games, and the choice to Burst proposes an enthralling risk factor.

There are various types of skills to be utilized by your Daughters. The first and most basic type is 'Instant Acton,' which immediately executes a move. Another one is 'Interrupt,' which works similarly to 'Overwatch' from XCOM. This kind of attack can stop a single enemy attack by launching a counter. Last but not least is 'Delayed Skills,' which end your unit's turn but activate later, delivering an especially powerful move. Implementing a mix of these very distinct abilities builds on the robustness of the battle system and allows room for experimentation. 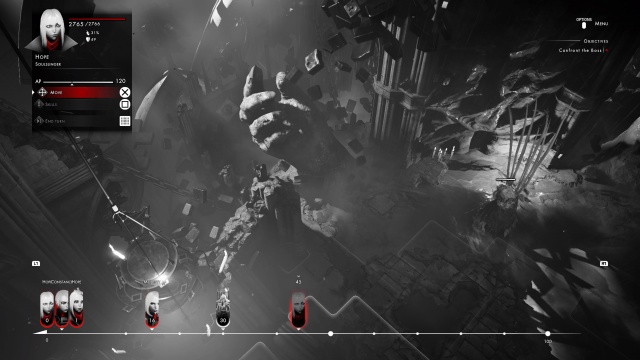 Three unique classes are available to choose from. Firstly, there is the powerful but weak 'Blademaster' who specializes in close quarters combat with her two-handed weapon. Next up is the 'Soulslinger,' a ranged type who brandishes two pistols. Lastly is the tank 'Shieldbearer' who holds a shield and longsword. All three operate accordingly. For example, the Shieldbearer can push enemies back tiles for crowd control, Soulslingers can react to attacks within a wide area, and Blademasters can deal a tremendous amount of delayed damage. Three classes aren't a lot, but a secret fourth class is available later on, and the unlockable skills can diversify your squad greatly.

The 'Chronomap' is your base of operations. From here, you can manage your units in the 'Inner Void.' Within this section, the 'Birthing Pool' allows you to germinate new Daughters to a name and class of your liking. For a beginner, these new Daughters will soon be deployed in the available 'Synapses' (missions.) You can check out the rewards for each mission, all of which earn you the three differing currencies for successful completion. There is XP that can boost a Daughter's 'Mastery' (level,) increasing stats and unlocking a new skill at every fifth rank-up. Another vital one is 'Vitae,' which you can spend on equipping 'Memories' which are like perks found by killing enemies. Finally, there are 'Shards,' which is the main component of the game's roguelite element. 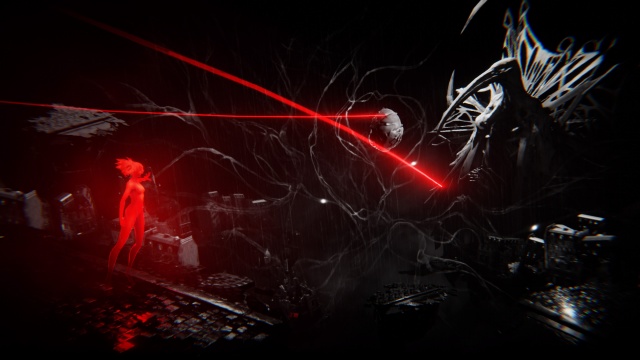 Red Mother sends her daughters to a synapse

Each time you run out of Daughters and Vitae, or fail in a boss fight, a new 'Recollection' (run/playthrough) occurs. Shards can activate Remembrances that grant power-ups like a bonus to collected Vitae or damage dealt. This loop of losing and getting continually stronger is fun and evens out the game's unforgiving nature. For you see, Daughters never recover from their wounds, and one must sacrifice the other to regenerate a fellow sister. This is not in vain, though, as a stat of that sacrificed sister will be carried over in your healed character's 'Traits' page. Coupled with the sight of seeing your squad become increasingly bloodied and dark-eyed the lower their health, there is a sense of consequence with your choices on the battlefield. However, the rare 'Resurrection Token' can be used for resurrection in the 'Cemetery,' which is useful for bringing back your most experienced fallen fighters.

There are aspects to your hub world that are integral for consideration when starting a new Recollection. As the name "Chrono" implies, there is an emphasis on time. 'Eras' (chapters) are made up of days, and each day ends when you rest and prepare your Daughters (each one can only be used once at a time for missions.) On some days, random 'Events' can occur that either increases or decreases stats for all units. Mission lists are also random, offering varying difficulties and modes. The latter includes 'Hunt,' 'Survival,' and 'Ritual' types, offering simple objectives ranging from elimination to escorting.

The game's biggest pitfall is that the mission range gets slightly tiring when you binge the game, and their main purpose is for preparation and grinding towards battling bosses (at least for a first playthrough.) Hunt does its job adequately in its "kill all targets" approach, but Survival is not as effective. As the name implies, you need to hold out long enough until you get to the extraction point. This is inspired by XCOM, but it doesn't work as well in Othercide's often confined and cluttered maps. Once you get to the point where litters of enemies spawn from all corners, escaping is a drag to play through. Ritual is a little more interesting, but it doesn't appear enough in Synapse lists. In the end, I recommend turning on the 'Faster Gameplay' setting when a superfluous hoard of creatures spam you with attacks. 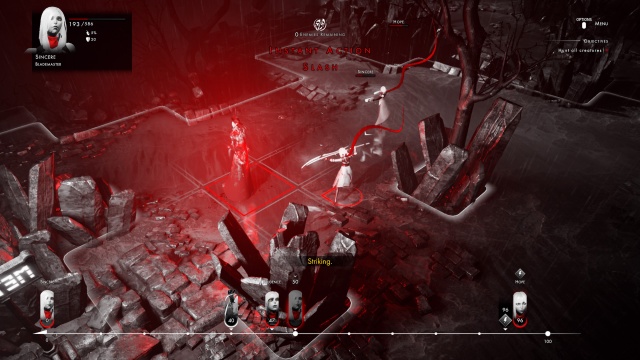 On the other hand, enemies are generally incredible and top off every battle with a sense of dread and the need for adaptability. Like the Daughters, they can range from the ranged 'Curse Therapist' to the hulking 'Hunter.' There are so many kinds of 'Cultists,' 'Nightmares Creatures,' and other divisions of opponents, each with abilities as expansive as the daughters. The same praise goes for the impressive bosses that are unpredictable in their nature and movesets - behavior that the developers actively focused on to defy vapid video game conventions of fixed enemy movement structures and actions.

Something else that defied all expectations is the confidence of Othercide's artistic direction. The black and white aesthetic will be remembered as one of the most realized styles in indie game history, as well as the design of the locations and characters. Each map has startlingly astonishing environments - from harrowing masses of Victorian statues to the rainwater streaming across and flooding the pavement's many cracks and openings. Lighting is also utilized as well as some of the best noir flicks, showing faint, ethereal light beaming into a dingy church, for example. The baddies are also genuinely terrifying - from the gazeless plague doctors to the grotesque and naked monsters, there is something here that will cause anyone to shudder. 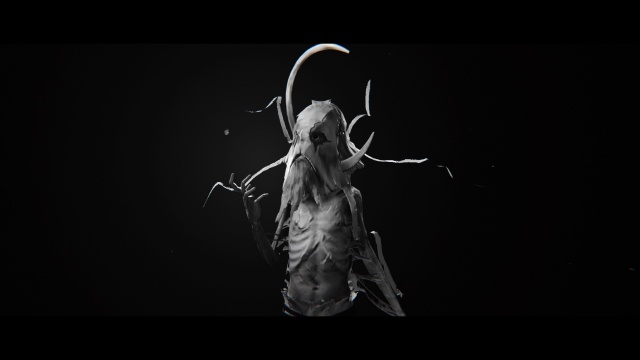 The lore and narrative of Othercide are immersive, too. I can't wait to replay the game again to discover all the story chapters, which tell an epic story of the Mother spanning eons of historical periods. The descriptions and concept art of characters are also awesome, implementing rich symbolism and deep themes of madness, faith, and other such dark territories reminiscent of the evocative Silent Hill series. There is a weight to the atmosphere and contrasting visuals - how the Daughters yellow eyes and red ribbons are the only color left in the world - as well as the audio design. There are both chilling and relaxing effects caused by the neverending rain, and the music is also pretty engulfing too. Epic metal riffs and synthesizers progress as you slay enemies, with the song 'Soulswap' is a particularly moving main theme. Overall, Lightbulb Crew crafts a world you won't soon forget.

Othercide is a menagerie of morose beauty and slick turn-based action. You will feel both vulnerable and powerful at any given stage, which is indicative of the dynamic RPG and roguelite elements. And with an unforgettable artistic flair and engulfing atmosphere, you won't want to give up, no matter how crushing the difficulty can become.

Final Rating: 86% - Othercide has the symbolism of Silent Hill, a similar setting to Bloodborne, and aesthetics akin to Sin City and Nier Automata.