Kingdoms of Amalur: Re-Reckoning is a remaster to the fondly remembered but oft-overlooked 2012 original. It’s a miracle that PS4 players will experience one of the most stellar action-RPGs of the seventh generation. With genre-best action, overflowing content (if a little stale), and lush visuals, this package is well-worth either a first-time visit or a return to this magical kingdom.

This being a high fantasy, there’s bound to be a narrative with a ‘Chosen One.’ Kingdoms of Amalur tries to twist this around by making you ‘The Fateless One.’ After you are brought back to life by a magical device called ‘The Well of Souls,’ you become the first individual who has cheated death. You are then granted the power to alter the fate of anyone. The main questline follows the battle against the ‘Tuatha,’ a faction hell-bent on wiping out all mortal races. It’s a glorified fantasy trope extravaganza, but the main story has some charming characters and a grand adventure vibe. 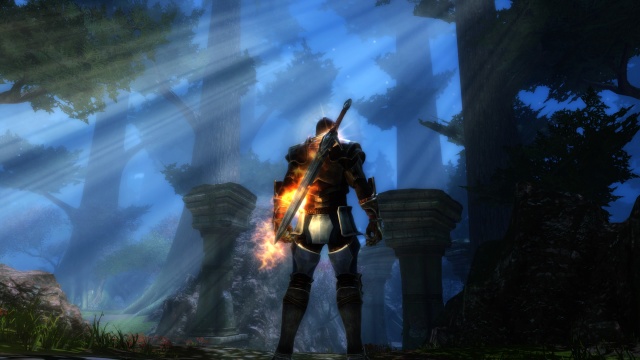 While most RPGs have an inferior main questline, Kingdoms of Amalur’s side quests are worse. They mostly consist of bland fetch quests, and the people you are helping out feel like stock characters. The seven ‘Faction’ questlines fare better, even if the objectives are a little repetitive. These consist of fighting the same old bosses and performing similar tasks over and over. Think along the lines of Oblivion’s menial faction tasks. However, if you persevere, you will be met with solid storylines and even choices that impact narrative and loot rewards.

Even if the quest content can sometimes feel dull, the combat more than makes up for that. The gameplay is like a hack ‘n’ slash in disguise - it’s the closest thing we’d get to an old-school God of War RPG. You can play with various weaponry ranging from dual-wielding swift Daggers to the mighty Hammer. Ranged types are impressive too - from the classic Longbow to the magical Sceptre. Most weapons and armor fall under one of three categories - ‘Might,’ ‘Finesse,’ and ‘Sorcery.’ These are called ‘Destinies,’ and Kingdoms of Amalur’s superb progression system allows you to shape your Destiny (stat build) however you wish. Even if you want to mix it up, you’ll be a leather-wearing wizard in no time.

There is a dynamism to combat seldom found in most RPGs. You have two weapon slots to put in any kind of instrument, so you can switch between, say, a ‘Greatsword’ and then a magical staff on the fly, all with a mere switch-up between the square and triangle buttons. As you level-up and upgrade, you can spend skill points on unlocking new awesome abilities to use. These are a blast to use - whether they may be a ground pound or a simple lightning bolt. It’s not mindless, though - you’ll need to conserve your ‘Mana’ and keep an eye on your ‘Fate Energy’ bar. Once this is full, you can enter ‘Reckoning’ mode, a devastating state of slowed-down time, and increased damage. Once you clear up all enemies, you should perform a ‘Fateshift.’ This initiates the execution of an enemy, and it will also finish off everyone else with no health. The quicker you button-mash during this sequence, the more XP you shall earn. Even if the finishers are gratuitous, Reckoning mode is indubitably satisfying. 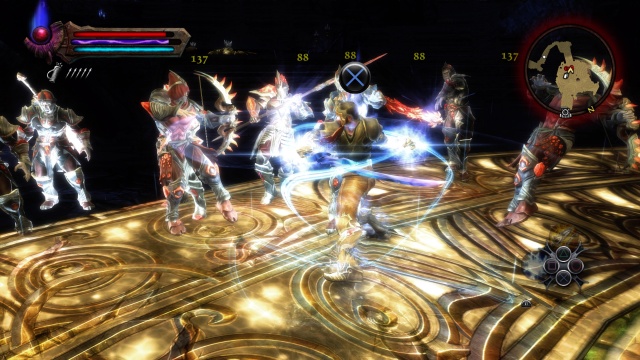 With this remaster, the infamously floaty camera is refined, and combat feels a lot smoother overall - 60 FPS on PS4 Pro and vastly improved frame rate for standard consoles seal the deal. Visuals also look more luminous with some nice bloom effects that compliment the art style well. Artist Todd Mcfarlane’s stylized art design is still imaginative and makes up for the lack of detailed facial expression in dialogue sequences. And while these and other dated animations couldn’t be changed, all the textures were touched up. It all results in a game that is pretty easy to look at - especially when exploring the vibrant forests, scenic plains, and crepuscular caves of the Faelands.

This is a humongous package. Everywhere you go yields some kind of activity or discovery, so you may even feel overloaded. Heck, I haven’t even mentioned lockpicking and dispelling to unlock chests, customizable smithing, and alchemy found from reagents throughout the world - all of which work wonderfully. There are also the two expansion packs included - The Teeth of Naros (which adds a floating city) and The Legend of Dead Kel (which adds an island and even the ability to marry an NPC). Sure, the lore exposition dumps and lifelessness of the world are mechanical compared to, say, The Elder Scrolls. However, there is a certain magic to Kingdoms of Amalur: Reckoning that lies within its addicting loot grind and strangely alluring cliched fantasy atmosphere.

Kingdoms of Amalur: Re-Reckoning is a revitalization of a game that remains vivid, addictive, and comfortably familiar. While it lacks the immersive touch of something like Skyrim, The Witcher, or Fable, the split-up areas of the Faelands are still fun to explore. However, the main draw remains the irresistible combat, which has now been refined to its full glory. As such, this remaster is the definitive way to experience one of the very few action-RPGs that realizes the “action” part so phenomenally.

Final Rating: 79% - We reckon that Kingdoms of Amalur: Re-Reckoning is still worth the trip down seventh-generation lane.