The subtitle for Crash Bandicoot 4 has dual meaning. The last original Crash Bandicoot game was released over ten years ago, so fans of the ‘coot collective agree that it is indeed about time. And then there’s the game itself, which is all about time. The mad scientists imprisoned by Crash at the end of Crash Bandicoot: Warped manage to open a rift in space-time and create a machine that allows them to escape to different eras. The rupture has the side-effect of awakening the Quantum Masks, and with their power Crash, and his little sister Coco, will cross time and space to track the villains down.

The first choice you’ll face in the game, even before deciding whether to play as Crash or Coco, is your playstyle. “Modern” is a checkpoint-based style – lose a life and you’ll return to the last checkpoint that you reached. “Retro” is a nod to Crash and platform games past, your lives are limited, and while you can earn additional lives as you play, losing your last life will end the level. Luckily this choice is not permanent, because if you overestimate your skills and select “Retro” you can switch to “Modern” at any time. There’s no shame in doing so because Crash Bandicoot 4 is a challenging game, but more on that later.

Once you start playing, the game will look and feel familiar to you if you’ve played a Crash game before. Not because the level’s not original – the entire game is – but because you’ll instantly feel at home. The jungle setting, the pitfalls and swinging traps, the crazy enemies pacing the platforms, … this is a game that remains true to the spirit of Crash Bandicoots past. Graphically it’s very much a game of this generation, though. The worlds are filled with minute details, the animations are fluid and lifelike, and the colors are rich and vivid. 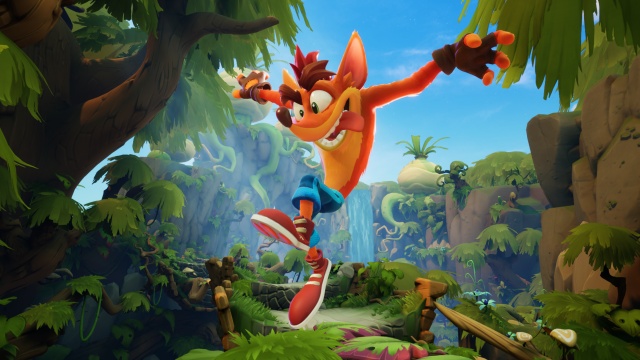 Crash – and Coco as well, as the difference between them is merely cosmetic – has a couple of ways to deal with the enemies along his path. He can do the time-honored platformer thing of jumping on an enemy’s head or do a high-speed spin and send them flying with his fists. Either works with some enemies, but others have defenses that will force you to use one attack or the other. Enemies are purely obstacles in the game, and you can try to avoid them rather than eliminate them when possible. Using a spin attack to send one flying into another enemy or crate can be particularly satisfying, though.

Crates? Yes, the crates have returned and are an integral part of the gameplay as always. You’ll want to smash them all for a few reasons, the first being that they usually contain Wumpa fruit. If you’re playing in Retro mode, accumulating Wumpa fruit will earn you extra lives just like in the old days. In either mode, Wumpa fruit collection will help you to earn gems when you complete the level, and collecting all of the gems for a level will unlock new skins for Crash and Coco. Destroying all of the crates in a level will also earn one of these gems, but this can be a bit challenging. The game likes to hide the occasional crate somewhere where you won’t see it if you’re not looking for crates hidden somewhere where you won’t see them. Crates are also often used as bridges across gaps, so you’ll need to break the stacks that sit between you and oblivion while carefully not falling into oblivion. There are also brief optional challenge areas in each level that are almost as much a puzzle as they are a test of your platforming skills, so getting all of the crates in a level and snagging that gem is not necessarily that easy to do. 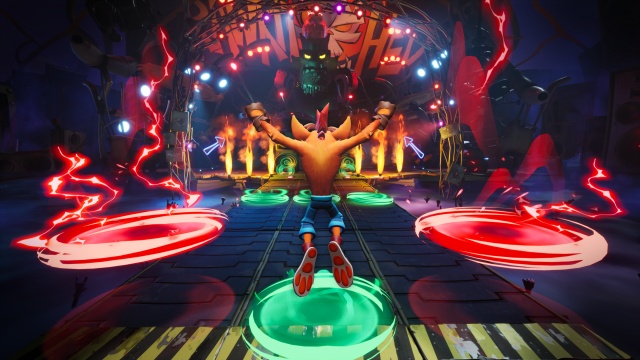 Remember those masks that were awakened by that space-time rift? Well, they also figure into the gameplay in some of the levels. Each of the four Quantum Masks has a unique power, and that power can be used by Crash when he dons one of the masks. You’ll only have access to a mask at certain times during the game and the portions of the levels where a mask is available are designed to specifically take advantage of that power, adding additional puzzle elements to the game. Lani-Loli phases highlighted objects in and out of physical existence, making crates and platforms alternate between being solid and pass-through. Kupuna-Wa slows down time, making moving platforms easier to land on or making it possible to slip past fast-moving enemies. Akano controls dark matter, meaning that you’ll be able to unleash its energy to break the unbreakable or change movement patterns in platforms. Finally, Ika-Ika gives you control over gravity, making up down and turning ceilings into floors.

Like the games in the original trilogy, Crash Bandicoot 4 likes to mix things up for you beyond its primary third-person chase cam perspective. Most often it makes a switch to a 2.5D side-scrolling perspective, but expect swinging vines, rails to grind, chase sequences that have you running towards the camera and rides on the backs of beasts and machines. Gameplay variety also comes in the form of the chance to play as other characters. Tawna, a bandicoot from another dimension, has a few featured levels of her own. These levels play differently than the other bandicoots’ levels because of Tawna’s athleticism and her trusty hookshot. The hookshot is a handy way to take care of enemies, but it’s primary use is traversal and her levels are designed with plenty of long gaps and verticality.

Tawna also stars in some special levels know as Timelines. Timelines give you the chance to see some parts of the story from a different perspective, a look behind the scenes at events that had an impact on your gameplay but that you didn’t know it at the time. In addition to Tawna, Flashback levels also feature other characters, Dingo and Cortex. Yes, Cortex. Like Tawna, Dingo and Cortex have their own unique playstyles. Dingo has a vacuum gun that helps him float or gives his jumps a boost, while Cortex carries a ray gun that changes creatures to platforms. Like the Tawna levels, the Dingo and Cortex levels are designed to take advantage of their special skills. 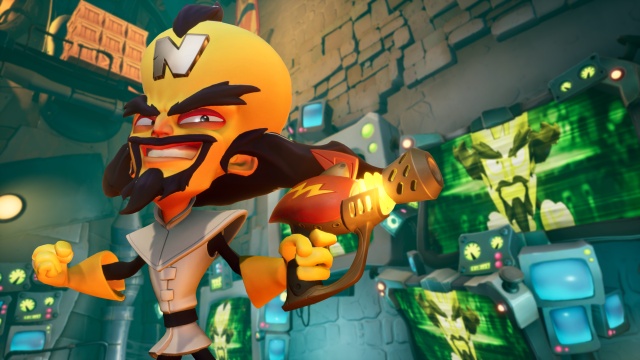 That’s a lot of gameplay variety there, but wait, there’s more. If you find a VHS tape in a level, you’ll unlock a flashback level. These levels take place in the past, when Cortex ran Crash and Coco through his test chambers. These levels are puzzle-focused and challenging, and in a fun retro touch look like you’re watching an old well-worn tape on a CRT screen.

There are also ways to experience the levels that you’ve completed in different ways. Anyone who’s play Crash games before will recognize the time trials, which challenge you to complete levels as fast as possible without losing a life. You can also replay levels with friends in Pass N. Play – play alternates between players on each death or checkpoint – and Bandicoot Battle – in which players compete against each other in time trials or crate combo scoring. Replaying levels doesn’t get any weirder than N. Verted mode, though. You’ll play the levels backwards and each will have a unique and completely strange look to it that’s nothing like what you saw on your first time through. 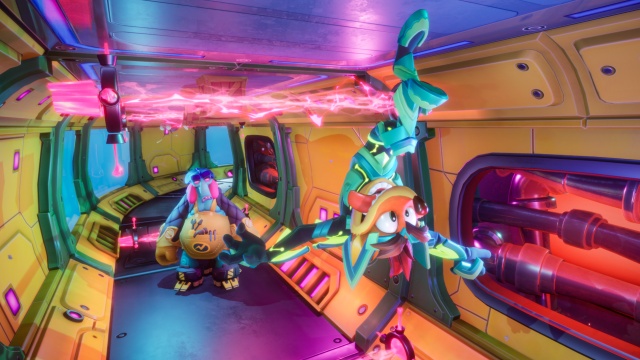 Crash Bandicoot 4 is a worthy addition to the Crash legacy. It captures the spirit, fun, and challenge of the original games, and adds a lot more that genuinely makes the experience even better rather than simply padding out the gameplay. The game is certainly challenging and the levels could probably use a few more checkpoints, but the number in the game is truer to the spirit of the originals than modern gaming standards. A little perseverance will get you through the game, but it’s going to take a little work if you want to be a Crash completionist. Overall it’s a great platform game that perfectly blends the old and the new into a fun new experience.

Final Rating: 90% - A worthy successor to a storied franchise.