I did not initially have a pleasant experience with Project Warlock. It throws you in the deep end, even on the easiest difficulty, and expects you to grasp its rhythm and layout as if carnage/chunky shooters are a kind of universal gaming dogma. The first few levels were convoluted, the enemies were crushing, and I kept dying. Yet, as I persevered, I experienced a baffling U-turn in thought - Project Warlock is, actually, an entertaining time. However, you may need to be patient with the game's shortcomings to fully enjoy it.

You play as a warlock on a mission to rid the world of a hellish scourge. The plot is only told in short sections of text, and it really does not make for great motivation. You do not necessarily play a DOOM-inspired FPS for its story, but some sort of expository introduction could have done wonders to make this feel complete. The 'writers' on the developmental team did not bother with world-building since enemies are given names like "Zombie" and "Huge Bat."

Despite its ostensible nature in naming things, Project Warlock has personality in other ways. The enemies are beautifully designed and are bursting with character. From attack to death animations, each demonic entity feels like they took the soul out of their artists in terms of effort. Some stronger baddies will transition into different phases, depending on the damage you inflict. They could be walking without one arm, and then none at all. This is the sort of detail that has to be seen to be believed, and this is not just a show of quality. There are tons of animations that are equally neat and admirable. 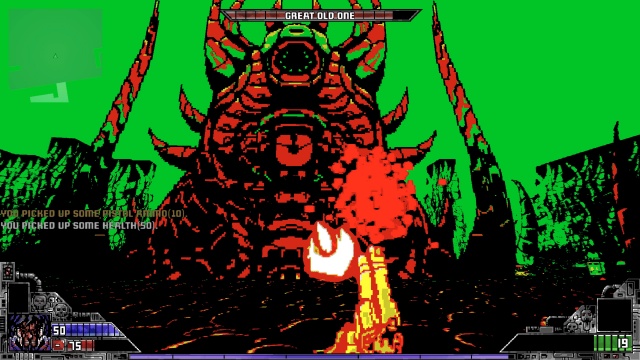 An eater of artist's souls

Five episodes are set in different locales. There is a radical variety on display from mystical monuments in Egypt to the squalid streets of a cyberpunk city. These stages never feel recycled, and neither do the baddies or bosses. When you are facing an enemy called 'Thingy' in an abandoned Antarctic base inspired by John Carpenter, you genuinely get behind the visual theme of any given level. However, it is a shame that you have to flick switches and navigate through a labyrinth of corridors in most of these fascinating locations.

As well as pressing buttons to access new paths, you typically have to find colored keys to open a sequence of doors. The problem with these (already) hackneyed choices of design is that the in-game map does not slowly open up, nor does it indicate where anything is (let alone a distinguishing of doors). As a result, you will be running around in circles, scratching your head as to where the right direction is. Unlike 2019's Ion Fury, you can't bring up a map in full view, so a barely competent mini-map on the upper left corner is all you can work with. This just goes to show that accessibility of navigational interface cannot be stressed enough.

Desirable quality of life improvements could also fall under user-friendliness. Case in point, there are no tutorials. Like I said in the introduction, you cannot expect everyone to know how '90s shooters work, even if they are simple. There are also no manual save slots, which means you have to complete up to four stages before auto-save initiates. This is not only a symptom of the gaming community's obsequiousness to the flawed past, but to the programmer behind this game. Jakub Cislo was only 19 when Project Warlock originally released on PC in October of 2018, so he may have designed some aspects with some naive veneration. Regardless, this is a commendable result from a fledgling of the gaming industry.

Thankfully, the team embraced newer design ideas, with the most apparent success being the light RPG system. You gain EXP by killing enemies and, oddly, finding treasure. Each level-up earns you a skill point that can upgrade attributes strength, HP, mana, and carrying capacity. There are also the rare 'Perk points,' and most interestingly, the 'Upgrade points.'

Upgrade points can be used to purchase spells and upgrade weapons. Depending on whether you favor mana-fueled sorcery or gun-blazing action, each enhancement will considerably impact either playstyle. For guns and melee, you pick one of two improvements for any given weapon. Every choice on offer can change weapons almost entirely. For example, the SMG gun can be made into a dual-wield combo, or the thoroughly different 'Nail Gun.' Or perhaps you may decide whether you want a flare gun or a .50 magnum in your pistol slot. Either way, determining such options is tough. The same goes for spells, which also cost upgrade points, but you will probably be sticking to one section or the other. 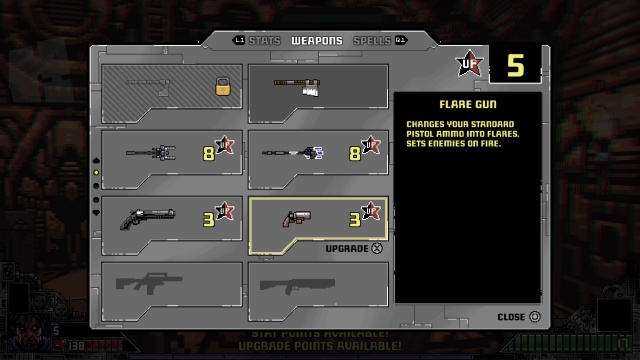 Bringing guns to a spell fight

Combat itself plays out nicely. There are nine categories for the instruments of destruction - most of which feel satisfying if generic. There are also some underwhelming elements, like the flamethrower's lack of punch, and uncookable throwables (grenades and dynamite.) Also, spells could have been implemented in a more Bioshock-esque way where one hand of your character could be holding a gun while the other is casting. Finally, the last fundamental problem is the default weapon switch wheel, which is very unintuitive and should be turned off immediately. Nevertheless, the EXP-earning and simple momentum to the gunplay is an addicting combination that I wish most carnage shooters had.

There are four difficulties available, each with a certain amount of lives attached to them. If you run out of lives, it is game over (for real,) and all progress is lost. Extra lives are rewarded after boss battles and found by discovering 'Secrets,' which are rooms that also grant extra XP and ammo. Ultimately, while these modes add more replay value, they are too hard for their own good. In a game where the foes follow you across separate rooms, and where you start severely underpowered, I do not know how fair or fun a permadeath playthrough would be.

To top it all off, you can play this old school throwback through an even more blinded perspective. How? Well, with shaders, of course! If you want to make the visuals look like a Gameboy, you can with retro color palettes. Things can be dialed up to 11 by combination with display shaders, which makes the game look like it is being played on an LCD or an old monitor. Specific effects such as scanlines, glitches, saturation can also be tinkered, allowing for all kinds of visual trips down memory lane. 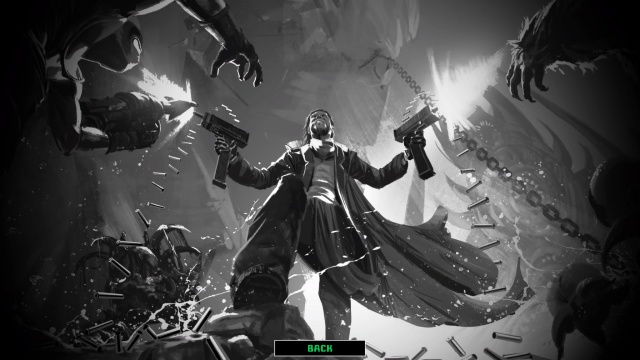 Project Warlock is a flawed concoction, but its fun factor will ultimately cast a captivating spell over its players. The repetitively catchy soundtrack gets you pumped, the weapon choices are impactful, and the enemy-stage design work is utterly terrific. While it will not win over newcomers with its standoffish presentation, this project should give fans of classic DOOM and the recent Ion Fury something to dig into.

Final Rating: 75% - A PC port that does little to nothing to improve upon its original release, but it still rocks in its own '90s-inspired ways.