New Super Lucky's Tale is a re-release of the 2017 original. This version ushered in a significant reevaluation of the game when it came out for the Nintendo Switch two years later (in 2019.) Now PlayStation players can finally own this definitive experience with its vastly improved controls, more vibrant graphics, and a slew of touch-ups that all make up this unsung collect-a-thon achievement.

Most of the plot is delivered through an introductory cutscene. Evil feline sorcerer Jinx destroys the home of an ancient order called 'The Guardians' and tries to steal 'The Book of Ages,' which is their most powerful artifact. When the evil cats confront the heroes years later, the book opens a portal in reaction to Jinx's magic. This pulls not only the Jinx and his family, but also Lucky, the kid brother of the last Guardian Lyra. As Lucky, you will have to recover the scattered pages of the book and defeat the villains across various worlds to get back home. 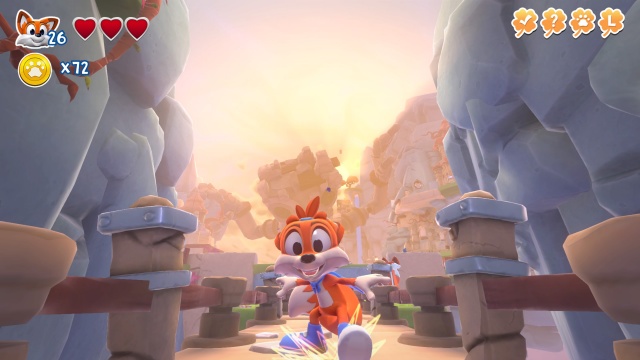 Lucky finds himself sliding into an adventure

The opening cinematic has a nicely hand-drawn art style, but this (and the whole story) is a classic case of "show, don't tell." We are told this is Lucky's tale, but it barely feels like it. You pick up the pieces of an event that just played out through expository pictures (and expanded upon through loading screens), which does not make for an engaging setup. Lucky himself could have benefited from actual dialogue, too, which could have made for a more manifest personality and some intriguing storytelling. However, this narrative is probably just a supplement to a game aimed at kids, so the simplicity is understandable.

It's time to dive into the first and foremost foxhole - gameplay. Here we have a 3D platformer with an emphasis on collecting stuff. You will enter portals in a hub world and aim to find three types of collectible found in each level. There is one hidden Page, five missing letters that make up the word "Lucky," and another Page that can be automatically unlocked by amassing 300 coins. The first two can be earned through completing small tasks/searching the area, and it's no sweat to collect enough currency when well-placed diamonds can make you a bucket load. You also get a Page when you complete a level. This is integral for beating the game because garnering enough of these missing pieces of paper will unlock the final boss of a world. 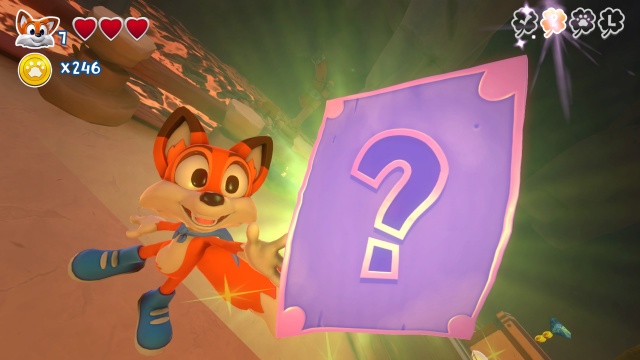 Movement is paramount to how much you enjoy navigating and discovering, so how does this fare? Well, the controls are as smooth as a fox's fur. This revamped edition changes not only the wonky camera, but also the protagonist's walking pattern from all-fours to bipedal, and all the better for it. Lucky's scampering is not only adorable, but is also very functional. You will seldom fall off a platform as a fault on the game, and everything feels just right in regard to running. Things get more impressive when you use the 'Burrowing' button, which makes Lucky dig a hole to surprise enemies, maneuver around obstacles, and reach areas (you will slide when on a hard surface). There is also the 'Tailswipe,' which stuns enemies and can extend your single/double-jump mid-air. It's a fantastic control scheme.

You can utilize your abilities in stylishly mixed successions. I could slide down a vertical slope, land (and stun) an enemy, finish them with a honing Burrow attack, and double jump out of the ground. This is all in one instance, and this fluidity of motion is satisfying to execute. Lucky's animations are also brimming with character, so pulling these actions off is a joy every time. Even his idle animations are lovely - he'll watch other characters and things with a sweet smile, or gape in astonishment at your presence if you aim the camera in front of him. It was awesome to play as Lucky, and hopefully, this pup will be distinguished from the myriad of other mascot animal characters.

It was also a delight to play a diverse selection of content. There are 'Burrow Runs,' which is like an auto-runner in which you'll have to time your jumps. Some worlds will also have a 2D level, which harkens back to old-school platformers. The main types of levels (3D) will also change their structure, opting for 2.5D sections and fun tasks like interacting with a set of things, finding items, or completing a small dungeon room. Throughout the hub, worlds are also 'Sliding Block Puzzles, ' which are simple but increasingly challenging. Also found are the physics-based 'Tess Marble Mini-games' in which you'll have to navigate a maze by tilting it with the left analog stick. Coupled with each of the six world's varying themes and amusing talking NPCs, the game feels fresh consistently. 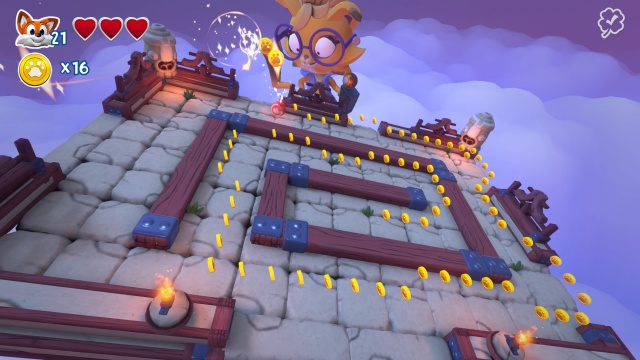 Putting a new tilt on gameplay

There is the case of the game's easiness, though. If you are looking for some difficulty, there is little here. As hinted at before, this game is primarily for younger audiences. Extra hearts are in surplus, 300 coins score you a new life, and the Burrow ability can get you out of most situations. Bosses can also feel samey and too much like a cakewalk - they mostly revolve around staying on a platform while you fend off minions. However, New Super Lucky's Tale is simply about having fun - whether that may be battling bosses or collecting enough coins to unlock a cool new outfit. Just go with the flow and switch off to the ten hours of light-hearted joy.

New Super Lucky's Tale is a wholesome 3D platformer with seamless gameplay and constant charm. While little is still offered in terms of substantial story or challenge, Playful Studios refined their game to newfound excellence with this re-release.

Final Rating: 83% - New Super Lucky's Tale is a pure platformer pleasure. You'd be hard-pressed to find a collect-a-thon that looks and plays this silkily smooth.