Golf With Your Friends Review

Golf With Your Friends is exactly what its title implies. It emphasizes having a pleasant time putting with 11 other pals. If you dislike sarcastic strangers, however, playing online may become draining. Though, assuming you have many friends, you will be hard-pressed to find a better party golf game. It plays like expected while delighting with curiously kooky maps and an ample amount of customization options.

There is but one premise here - to get your ball into the hole or other such goal. This is a lighter take on the sport since it follows a mini golf structure, so do not go in expecting a Tiger Woods PGA Tour-type simulation. The 12 courses solidify this less realistic approach. They take place in unexpectedly enchanting locales - from a haunted mansion and a space station to the courses faithfully based on Team17's previous titles Worms and Prison Architect (the latter of which is upcoming.) The variety is strong, even if some maps like 'Museum' reuse assets and feel too similar to their counterparts.

Since Golf With Your Friends originally rel`eased in early 2016, its graphics are understandably dated. However, the maps are conceptually solid. Using 'Free-cam,' it is cool to see some love and care put into the courses' designs. While trees and vegetation look lifeless, statues of Anubis in the Ancient Egyptian-themed map 'Oasis' and buggies on the Mars-esque 'Volcano' map are familiar but welcome sights. I could see these courses being actual sites if it weren't for the portals, lava, and other such otherworldly and dangerous elements. 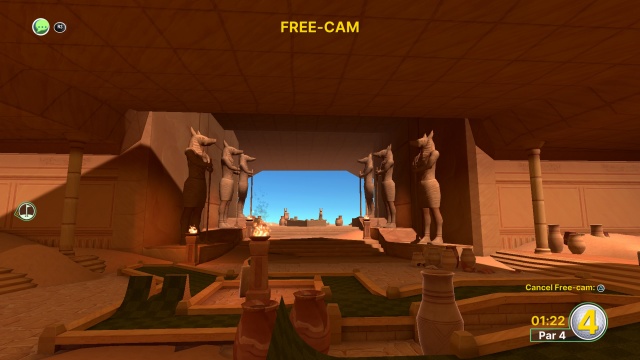 Many types of obstacles make up the challenge of a course's later holes. Classic mini golf staples like rolling platforms and rotating walls are dispersed throughout the more grounded areas like 'Forest.' Changes in topography and surface, like the skeletal bones of a dinosaur, are also a kind of barrier that amps up the challenge. There are platforms and animatronic mouths that open and close, too. Timing your shots for these is just as frustrating in the real sport, but the feeling of getting the ball in/through is satisfying; if you do not have an abysmal score at that point, that is.

The right analog stick both aims your ball and moves the camera while the left analog stick increases a power gauge. The higher this bar's meter, the harder the ball will be hit. These controls are suitably approachable, allowing the game to be genuinely "pick up and play." Just like the best kind of this type of title, it is easy to learn, but hard to master. Holding down R1 will enable 'Fine Aim,' which will allow you to be a lot more precise with your shots. The physics work pretty well and are never forgiving to your mistakes. Logic and careful planning when thinking about distance, impact, and slopes will be pivotal to a successful scoreboard streak.

There are five different modes. First and foremost is 'Classic,' which conforms to typical golf rules. The others are not as normal, starting with 'Dunk.' This replaces the holes with hoops and allows you to jump, radically changing the scoring method. Even more drastically different is 'Hockey,' which not only swaps the hole for a net but also changes the ball to a puck, differing in aerodynamics and on-ground movement. There is also a cardboard cut-out goalie to deal with. 'Explore' discards the two three-minute limits and shot counts of other modes, allowing players to discover shortcuts and routes they can use in competitive rounds. And, finally, there is 'Party,' which enables power-ups and the ability to spin. All-in-all it is a marvelous mix in an already splendid multiplayer suite. 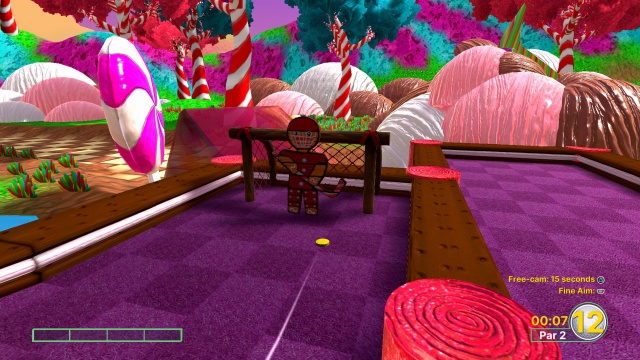 As previously noted, the player count in lobbies is up to 12, and keeping in line with its more arcade-centric direction, nobody online has to wait to play since everyone is taking their turn simultaneously. Playing a filled lobby with multiple shots being taken from all different directions is an amusing sight every time. Pressing R3 will bring up a set of messages you can use to greet, react, and compliment. From what I played, players only used compliments to make sardonic comments about bad shots, so expect some strangely commonplace toxicity. It is bad enough to get stuck; it is another thing when everyone spectating is berating your efforts.

Since human golfers do not feature, the game could have become visually bland and empty. Thankfully, you can imbue these balls with some character through the customization options. Similarly to Rocket League, you can change trails, as well as the ball's color. There are also 'Floaties,' which appear when interacting with water. Seeing a ball paddle in a boat or float in a life donut is a sight for sore eyes. Hats are available too. These are not all merely cosmetic - some, like the dinosaur skull mask, have their own unique animations that breathes life into an otherwise inanimate object. The only problem with customization is that there is no progression system - leaving the prerequisites for unlocking wearables up in the air. 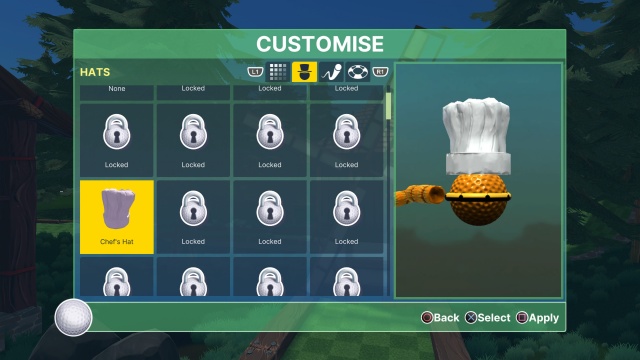 Tee up, because Golf With Your Friends is on par with the best golf games. Channeling your inner caddy with several other players is as fun as you make it, with mode customization that can modify gravity, bounciness, and tons of other factors. Dressing up your spherical friend is also delightful - seeing balls wearing cowboy hats and scuba masks defy sports game conventions. Despite some frustrating map designs and distractingly hollow early 2016 graphics, Golf With Your Friends scores a birdie in my book.

Final Rating: 77% - Golf With Your Friends somehow manages to make crazy golf even more bonkers than its name entails.