Deliver Us The Moon Review

Deliver Us the Moon is an adventure with a lot of heart. Developers KeokeN Interactive tried their best to emulate the evocations we felt watching the greatest sci-fi space dramas, and the result is like a beautiful rocket launch. Not only that, but the game takes on an identity of its own by blending its influences to create a thriller that is compelling and unique. There may be a lack of interactivity and actual gameplay involved, but the drive towards picking up fragments of plot points is the main focus here, and it is a blast.

In 2030, 'The Great Energy Crisis' began, which left the Earth with barely any resources. To find alternative means of obtaining energy, global powers created the 'World Space Agency (or WSA),' who soon found Helium-3. This is an isotope found to be abundant and powerful on the Moon, so they colonized the planet in 2032 and erected settlements, including a facility, an outpost, and a hub. To use the energy, the 'Microwave Power Transmitter (or MPT),' was created. It worked until 2054 when a worldwide blackout occurred. In 2059, from the ashes of the WSA, you play as a spaceman who will go to the Moon, repower the MPT, and save Earth. And if appropriately chartered, you will discover what happened to the Lunar colony after communications stopped. 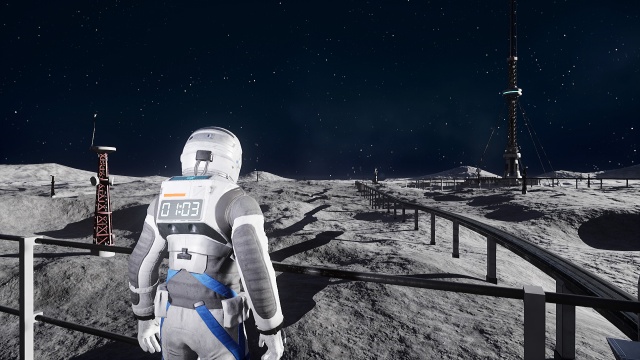 The soul of this game lies in connecting the dots towards what happened to the Lunar colony. There are text documents and audio logs scattered throughout the facilities, as well as holograms. These are wholly revealing as to the cause of the Blackout and the fate of the colonists. The writing is in full force here because the story and setting are well-realized. 'Copernicus Moonhub,' among other locations, feels lived-in and expansive. You will be roaming around crew quarters, halls, and council rooms to get an immersive gist of how these people lived. As for voice acting, it is quite expressive overall, with Nola Klop as Sarah Baker being a standout. Overall, the hidden revelations about the crew are shocking and personal - always propelling you to find out what happens next in any one of the seven interconnected story strands.

As aforementioned, Deliver us the Moon is light on gameplay. The most interactivity comes in the form of puzzle-solving. Puzzles come up when you have to, say, power up an engine to open a door. You might have to retrieve a new battery or find a movable platform to jump onto and gain access to a new area. These are, thankfully, simple problems that can be solved without much stress, although a couple at the end got me scratching my head. There are also lethal platforming sections that involve avoiding electrified water, burning steam, or even killer robots. These break up the narrative parts nicely for pace, although they are not particularly that challenging or exciting. 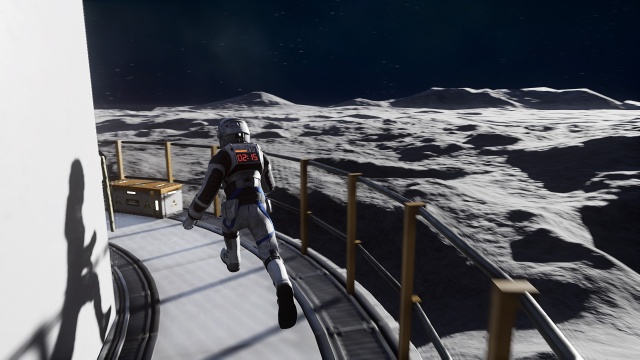 To progress, your spaceman has a plasma cutter on his right-hand glove for cutting open locked cargo bay doors and electrical fiber wires, among other things highlighted in yellow. However, your most cool tool is your ASE, a circular flying drone with a little blue light as an eye. It can be controlled to access places that you can not, opening up the way forward. The little robot is filled with character and accompanies you with every step. I wish there was more emphasis on your relationship with the bot since it has a fully-fledged AI and emotions, but I guess I have to wait for a video game version of the movie Moon to release until then...

There are some fantastic moments to be experienced throughout the six chapters. On rare occasions, you will go into a first-person perspective when there is no gravity. The second level has this set-piece that is the closest we will get to a video game adaptation of the movie Gravity. You are launched out of a space station, desperately trying to hold onto any passing satellites and debris as you hurtle toward the unknown. Along with an electrifying train sequence, these are the best kinds of quick-time events that will leave you on the edge of your seat. There are also more calming moments, like when you have to drive your Moon rover. It is both blissful and lonely to navigate the vast, empty expanse, and the starlit sky tops it all off beautifully. 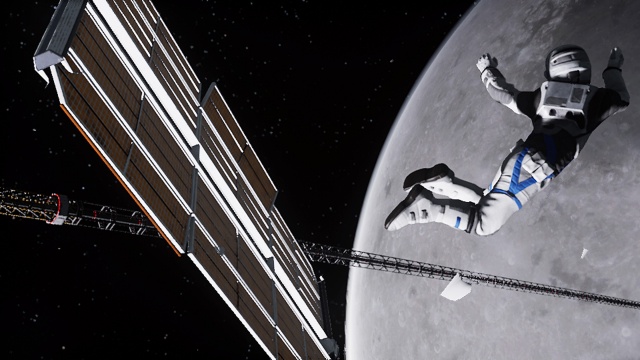 Graphics are good for the most part, especially when it comes to environments. The Moon is one of the most authentic virtual portrayals of a planet I have seen from a game yet, and the various man-made structures look great too. However, the low budget rears its ugly head through some of the player animations. Picking up things and other such interactions are done robotically, with iffy limb motions (outside of cutscenes) because of clearly imperfect animation switching and a lack of much-needed vitality for the playable protagonist's movements in general. Apart from those graphical blemishes, it did not feel like I was playing an indie.

The score soars, punctuating every climax to emotional depths I yearn for most when I experience something from any kind of medium. Composer Sander van Zanten shapes a penetrating ambiance with gentle piano notes, haunting organs, and spacey synthesizers reminiscent of ambient greats like Steve Roach and Brian Eno. I must admit I teared up a few times - not only because of the poignancy but also due to how the music swells gracefully, delivering hard-hitting crescendos coupled with the more impactful moments. When art is this moving, it is undeniably special.

Soothing, intense, and emotional, Deliver Us the Moon takes you on a memorable voyage filled with wonder and surprises. Whether roaming the abandoned moon base or the dusty grey plains, you are engulfed by the palpable atmosphere engendered by the stunning score and crisp environmental visuals. Overall, this is a debut you will be over the Moon to play.

Final Rating: 80% - Deliver Us the Moon is an uncut sci-fi gem with a pureness that only comes around once in a blue moon.