There are but a few games that have undergone a critical reevaluation, and SpongeBob SquarePants: Battle for Bikini Bottom is one of them. The 3D platformer garnered a cult following and some retrospective praise, resulting in Rehydrated. As a huge fan of the franchise, I can safely say that this remake soaks in success. It not only retains the original's classic platforming gameplay, but also glimmers with gorgeous new visuals. Despite a sub-par multiplayer mode and a bit of datedness, this is a game that should make any Sponge fan say "I'm ready!"

The game opens with a familiar crustacean up to his old tricks again. Plankton prepares to unleash a robot army to steal the Krabby Patty Secret Formula. However, he accidentally pulls the wrong lever which programs the machines to be disobedient. Meanwhile, SpongeBob and Patrick coincidentally make a wish for their toys to become "real robots." The plot cooks up a couple of hours' worth of gleeful dialogue that will remind you of the series' earlier writing (if not quite as inventive.) Rehydrated keeps the voices from the original, which is both a great and terrible decision. It is very jarring when you hear the voice actors for Mr. Krabs and Mermaid Man, which are not the originals. However, Tom Kenny and company all give fantastic performances as per usual. 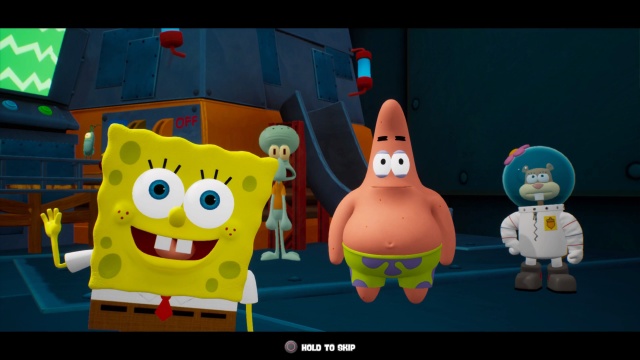 Say hello to some old friends

Battle for Bikini Bottom has surprisingly solid combat. You start off as SpongeBob, who can destroy robots with his bubble-blowing wand, as well as his upwards 'Bubble Bash' attack and 'Bubble Bounce' stomp. A little further in, you will gain access to Patrick, who has a move-set of his own. He is a heavier fighter that hits with his belly in both standing and downward attacks. Subsequently enough, you will then be playing as Sandy. She unmistakably karate chops baddies, as well as having a lasso that she can squeeze robots with. There are also a lot of great robot types that vary in intriguing ways. For example, there is 'Tar-Tar' who shoots sauce and 'Monsoon,' who can coordinate a cloud of lightning to electrocute our heroes. All-in-all, combat is basic but a blast.

Like the Krabby Patty, different layers shape something brilliant. In the context of this game, the platforming is foundational; it's the meat that makes the whole thing delicious. Like battles, each of the three playable heroes has different unique abilities. Sandy uses her lasso to glide, which is useful for higher platforms with wider gaps. She also can hook and swing across 'Texas Trailer Hitches.' On the other (tube foot) hand, Patrick can pick up watermelon/'Freezy Fruit.' These can then be thrown at enemies, buttons, and even 'Goo' (underwater water) to freeze and find new areas. Finally, the main man SpongeBob has a 'Sneak' button, which is used to walk on fragile surfaces and get past the menacing machine 'Sleepy-Time.' Switching characters for different situations work in a jiffy by stopping off at 'Bus Stops.' It never feels like a chore to do this because the stops are all conveniently placed, and using Patrick and Sandy makes for a nice change of pace, even if you are playing as SpongeBob 70% of the time. 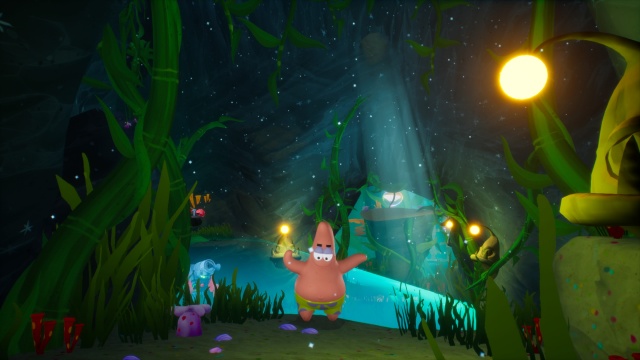 Patrick gets his turn

SpongeBob is one of the greatest animated characters of all-time, and Purple Lamp Studios constructs his definitive video game appearance here. He has even more capabilities than the ones described above, including the ability to throw bubble bowling balls and launch bubble torpedoes. What's even more impressive than this expansive move-set is his look. As much as I prefer Mr. Pants' hand-drawn renditions (seasons 1-3,) Rehydrated bases his appearance on the awesome design in the movie Sponge out of Water. As a result, the porous protagonist is adorable to play as he is to look at. His expressions in NPC dialogue conversations are incredibly charming when combined with genuinely funny writing. And, to top it all off, his idle poses are some of the best animations I've ever seen. 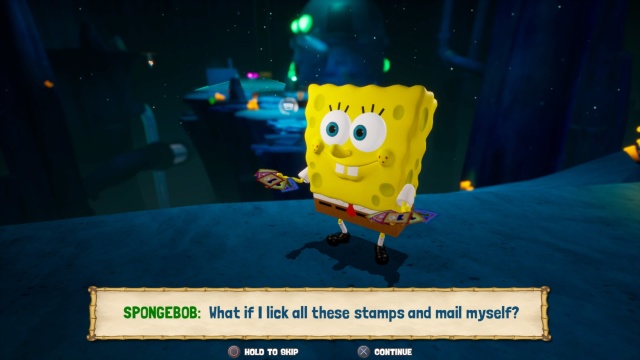 This game falls under the 'collect-a-thon' subgenre, which centers on collecting stuff for progression. In this case, you begin in the hub world (Bikini Bottom) and unlock new levels by obtaining 'Golden Spatulas.' These are collectibles that can be found in hidden spots and earned by defeating bosses. You can also complete tasks, which require you to collect or destroy several items in a level before being rewarded with a brand-spanking-new Golden Spatula. Another major collectible type is 'Patrick's Socks,' which can be then returned to Patrick for, you guessed it, more of the shiny utensils. Besides Psychonauts, I don't really like these types of titles. However, I was somehow hooked by the addictive nature of collecting everything. Combining this the incredible mix of platforming and combat amplified the fun factor to new heights.

'Shiny Objects' is the currency that helps you achieve that desirable 100% completion rate. It can be earned through exploration and destroying robots. They are ranked by color and can be spent to open up small areas or even bungee jumping and sliding. These two activities are so amusing and kinetic, and they have lots of 'Tikis' to break. Tikis are breakable figures that give Shiny Objects, and they include many variants. To name a few, there are 'Thunder Tikis' that explode when touched, 'Shhh Tikis' that you need to sneak up to with SpongeBob, and 'Stone Tikis' that can be carried by Patrick. They can then be given to Mr. Krabs for Golden Spatulas. Whatever you do, don't spend 40,000 Shiny Objects on the 'Theater,' because there is nothing but a slideshow of in-game screenshots. Despite this disappointment, they are a joy to earn, although a new game plus mode would have been more substantial than grinding.

Depending on how many spatulas you have, there are twelve magnificent levels to play in any order. They take place in several iconic locales that you will instantly recognize, like Jellyfish Fields and Downtown Bikini Bottom. The current era of the series' art style has lent itself well to these environments. Colors and contrast pop out in rich 4k visuals. The biggest cause of celebration is the lighting, though. While levels such as Kelp Forest were infamously dull and dim (like stars above Texas,) they now burst their banks with welcoming radiance. The way the lighting reflects SpongeBob's eyes, for instance, was a watershed moment. You also finally get a sense that we are in the ocean, as seen by beautiful wave-shaped shadow patterns and shimmering particles that glow in the dark. 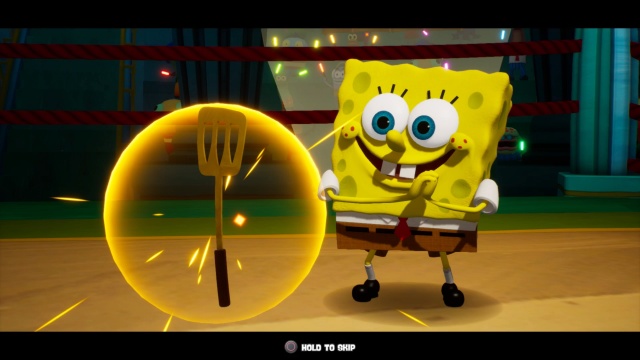 Rehydrated boasts a remastered version of the original score. The sound quality of the tracks is better than ever with stereo, as opposed to mono, channels. In terms of sonic harmony, the tunes resonate and then some. Themes are incredibly fitting to their respective levels, and the changes in genre match the three different acts of the game. The first few locales play that signature surf rock sound that is well-associated with the show. But then the levels become more industrial and darker which, in turn, allows a more electronic sound to dominate. Some of these techno tracks are ominous and mesmerizing, calling back to the 2000s in some great ways.

The bad apple in this basket is the mediocre multiplayer offering. Here we have a two-player co-op horde mode. The roster is the highlight, letting you play as iconic figures like Squidward and Gary. Considering there are seven characters in total, it begs the question: "Why is this not four-player?" Anyway, a more considerable query is why Purple Lamp Studios even included this addition in the first place. All you do is fend off seemingly endless waves of robots in a repetitive fashion. Matches include 26 different islands, but they are not very interesting to look at from the top-down perspective. Each of these islands pits you against three waves, but they are all easy and monotonous. If there were some kind of competitive aspect or in-game rewards like leaderboards, rank unlocks, and trophies, I would definitely see the point. However, all you get at the end is a scoreboard (and no Robot Squidward boss fight!) As is, you should leave this mode at the bottom of the ocean.

There are also flaws in the single-player. One of these shortcomings is the host of bosses, which can be overly simplistic and bland. That is true - you simply follow obvious attack patterns before exploiting an exposed weakness. This design choice was common in the early noughties, but at least you have visuals and dialogue to make up for this superficiality. There is also some poor audio mixing - some voice actors and actresses will sound more screechy than others E.G., Mrs. Puff will cause headphone users some grief. There are also some lack of shadows and fairly slight stiffness in certain cutscenes, but I am sure that the whopping 7GB update on release day will patch up these leaky holes. As such, be mindful of initial reviews of this game, as they may take glitches into account a little too much.

The original game became a massive speedrunning sensation in the 2010s, and this re-release aims to reinvigorate this speedy spirit by changing little to nothing. Sure, the feel of the movement is a little bulkier, and sliding is more high-octane, but Rehydrated plays almost identical to the Heavy Iron Studios version. If you are looking for a complete reimagining from a mechanical level, then, you may be disappointed. They also kept the lack of interactivity (unbreakable props) and occasional moments of insipidity when you see NPCs simply jaunting around the area. However, this game embodies an "If it ain't broke, don't fix it" approach that should appeal to the hardcore fanbase. Because, fundamentally, the gameplay is an untouchable pillar in the licensed games sphere. As such, virtually every item, health slot fill-up ('Underwear'), and collectible is in the exact same places as before. Although most of the exploits are fixed, I am sure it will be a joy for veteran players to uncover new tricks and tips to help in building up a rejuvenated speedrunning network. 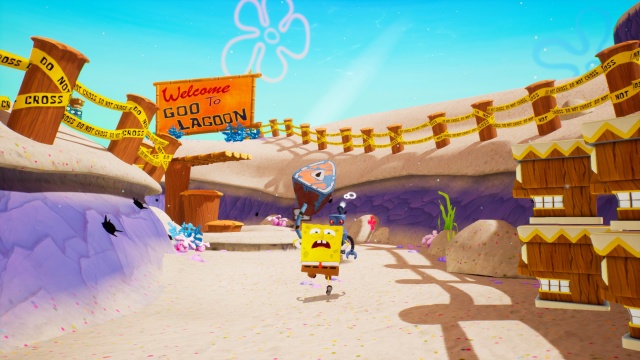 While this may not be as showy as a Sony-published remake, SpongeBob SquarePants: Battle for Bikini Bottom - Rehydrated's undeniable delight is something that very few games have. You will be submerged in this welcoming world with stunning aesthetics and overflowing charm. To top it all off, the game's combination of platforming, collecting, and combat is an unforgettable formula. In short for fellow SpongeBob fans, this is the nautical nonsense you've been wishing for.

Final Rating: 85% - Flop like a fish, because this remake is rapturous! All you need to do is ignore the multiplayer mode, and you should be good to go on this half-price trip to Bikini Bottom.