12 players are ready to play some dodgeball. Gleaming lasers shine down on the contestants as the countdown starts. Three, two, one...the match begins. Everyone scrambles to pick up a ball, and the carnage soon ensues as several mechanized combatants are hit and explode, filling the room with fleeting fireworks. This is Disco Dodgeball Remix, an outrageous arcade offering focused on its titular team sport. With charming character customization and an enormous multiplayer suite, this is an arena title with loads of working parts that do not belong in the scrapyard.

The game is played from a first-person perspective, and you take control of your very own one-wheeled robot. Once you pick up one of the scattered balls, it can be charged for a farther throw. You also have boost and jump bars that work in a similar way to Rocket League, but instead, have cool-down rates. There is also the ability to catch an incoming projectile so you can carry out a swift counter. Since you are a singularly moving automaton, you very much skid around the place, adding a surprising layer of sluggishness that encourages you to be methodical in your maneuvering. And, of course, this would not belong to the arcade genre without some good ol' power-ups. These are placed randomly throughout and range from jetpacks to fireballs. And if you think these modifiers are for normies, you can turn them off. 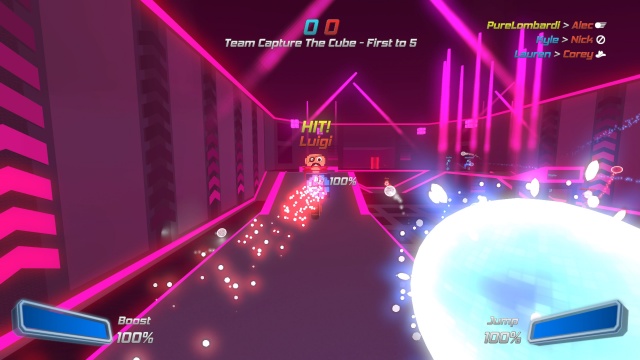 When a round begins, things get crazy quickly. Opponents will aggressively charge, grab any ball, and aim for you. Nobody is safe across the 15 maps. These come in big and small sizes, both providing equal levels of intensity. If you are in a spacious room with lots of space between spawn points, sweat-inducing sniping sessions take place. Small maps provide close-quarters action with lots of catching and quick throws. There is a firm selection of areas that have obstacles, rooms, stairs, and different platforms. All of these additions totally change the playing field for the better.

There is no story. Instead, you have access to 12 different modes. These can range from classic staples like team deathmatch and elimination to more out-there ones. There are the basketball-like 'Hoops,' races by way of the 'Grand Prix,' and the variation of hot potato 'Super Ball.' Not only that, but I personally loved the quirky take on CTF in 'Capture the Cube,' where you can use the cube as a weapon itself. I particularly dug the waves-based 'Horde' and 'Arcade' modes too - the latter being the main single-player component. Arcade is made up of levels with a few waves and a boss at the end, with a chance to buy perks with the 'DodgeBux' you earned from performing 'Skill Shots.' 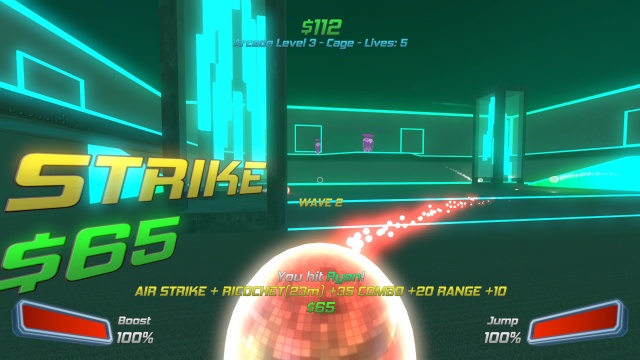 Skill shots are special tricks that can be done at any time, and they can net you more XP/DodgeBux depending on how hard it is to achieve. For example, the bygone days of 360-degree spinning in online games can finally pay off in the form of the 'Helicopter,' which requires you to do just that while airborne and before hitting the ground. There is also the 'Ricochet,' which requires the ball to bounce off the surface before killing an enemy. These add a fun layer that rewards your aptitude of skills like accuracy and mobility. And better yet, once achieved, you will hear a domineering voiceover call out the name of the skill shot with satisfying vocal delivery. It will bring you back to the days of old-school multiplayer greats like Quake.

Progression consists purely of unlocking cosmetics to make your goofy-looking droid even more silly. From the hats and glasses to the ball-throwing effects, there is a lot of charm to constructing your Claptrap wannabe. There is also an inventory system where you can combine 'Ingredients' from your level-up rewards into a random cosmetic. It is an innocuous and addictive grind loop. 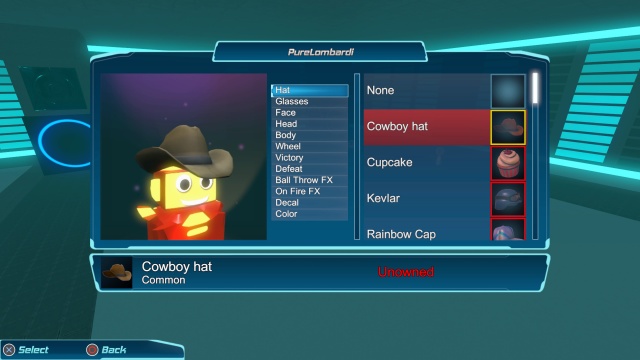 Disco Dodgeball also boasts a fantastic bond between visuals and music. The EDM soundtrack continually plays all round. The electroclash, drum'n'bass, and house beats always get my pulse pounding in moments towards victory or near-defeat. Each map is like the inside of a digital audio speaker, with walls and pillars serving as visualizers of different kinds. This means that volume bars will increase/decrease, blocks will fade in and out, and lighting can entirely change color when a beat drop occurs. This is an inventive idea that is wholly coalesced with superb tracks by electronic artists Adhesive Wombat, Kraedt, and Anoctave.

Unfortunately, I cannot experience the game in its full online glory. Since it is a few years old now, the community is pretty much dead. I could not find any rooms to join, and none of the users from the PS4 groups would join my party. I even hosted a session and left it running for hours to no avail. It is a real shame - but hopefully, this positive review will reignite interest.

Disco Dodgeball Remix is the definitive dodgeball experience. What it lacks in polish and presentation it totally makes up for in sheer fun. The hypnotic electro soundtrack is also something to cherish, and its multiplayer suite is bursting to the brim with potential. This is an underrated gem that needs to be discovered and dusted to see how radiant it really is.

Final Rating: 77% - A title that shines as brightly as the disco balls you will be hurtling towards your unsuspecting bot foes.