Saints Row: The Third is often considered Volition's last great title. It distinguished itself from the previous two entries by embracing a goofier side while still playing well to its gritty gangster roots (unlike the sequel's full-on absurdity.) Saints Row: The Third Remastered presents the game with graphics like a pimped-out paint job. The graphics sheen and gloss so much that it makes the game as good as you remember it. For newcomers, this experience will mostly live up to modern expectations while also acting as a gateway into sixth-generation open-world gaming's superb design philosophy.

You play as the custom-made leader of the 3rd Street Saints, a gang turned mass media organization. After a high-octane bank robbery opening, you and the team are arrested. While captured, one of the foremost members sacrifices himself so that you and the rest of your companions can escape. From there on, the Saints will have to deal with several opposing factions fighting for control of the city of Steelport. Along the way, you will recruit a few new faces that will help you in maintaining the Saints' empire.

While the story does not have the engrossingly dark drama of Saints Row 2, it does have a fittingly zany tone. However, some of the jokes and scenarios could never be made into a game within our current age, so be prepared for some eyebrow-raising bawdiness. Aside from the indecency, there is some good writing to be found. The gangs are quite memorable and menacing, making the 15-hour storyline worth the hassle. There are also some uber-cool set-pieces in the main missions. From riding a detached bank vault via helicopter hook to shooting enemies while freefalling, each of the three acts contains an unforgettable sequence.

Before heading out into the city, you have to create your character. There is a disappointingly limited number of hairstyles, but I personally made a protagonist with my likeness using the customizer's random option. Dressing up is a lot more versatile, and the game already comes included with many sweet DLC 'Suits.' However, it's disappointing that you cannot combine these pre-made outfits with your own clothing pieces or edit them outright. Despite this, the novelty of wearing a Samurai or werewolf costume is nicely outlandish. 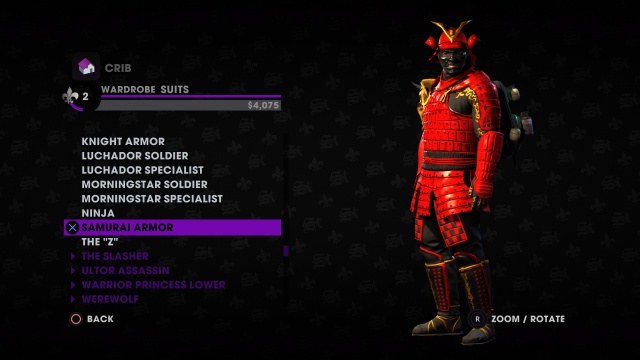 The game is played from a third-person perspective and plays out like a "GTA clone." However, this common branding does an injustice to Saints Row: The Third's distinctive fast-paced combat. Gunplay may be standard fare at first glance, but there are some outrageous toys of destruction waiting to be played with (including nine DLC weapons.) From a rocket launcher that launches mind-controlling squids to a bait-spraying shotgun that lures a great white shark to devour its prey...the arsenal speaks for itself. That is not even mentioning the many melee weapons and ridiculous hand-to-hand finishers. As such, combat very rarely gets boring, despite the AI being the game's biggest joke.

You can make your way around the city of Steelport with diverse and stylish modes of transportation. There are some pretty slick cars, motorbikes, and buggies waiting to be hijacked and customized. If you are more of an aviator, the selection has you covered, from jet planes to helicopters. Whether you are looking in your crib's hangar or garage, this complete edition of the game comes bundled with seventeen DLC vehicles. Want to ride a hovercraft out of your penthouse or order a gang member to deliver you a giant ball of yarn? These weird and wonderful ways of conveyance are available from the get-go of your new save. 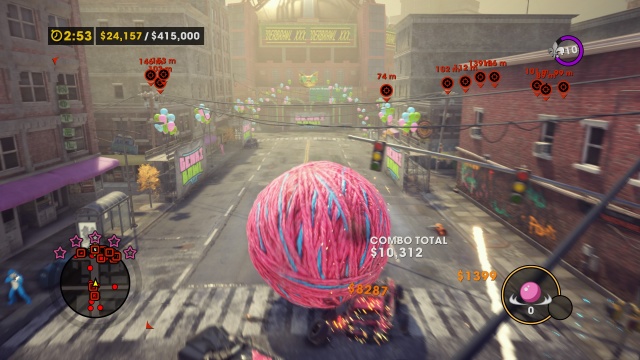 Someone call for some yarn?

'Respect' is like the XP of the game. With each rank, you gain access to new abilities to purchase with cash. Whatever act of mayhem is being committed, you are always handsomely rewarded with respect. Multipliers can even be achieved for whatever action, from near traffic misses to headshots, each giving more respect if continually racked up. There are also challenges that reward huge chunks of XP, some of which are trophies (an in-game tracker is always convenient.) All-in-all, this system is brilliantly satisfying - compounding the fun into worthwhile incentivization.

Activities have always been a staple of Saints Row's distinctive sandbox design, and they are in full force here. There is a mouth-gaping selection here, with about eleven unique ones and five adequate variants of them. My favorites include 'Insurance Fraud,' which requires you to use the blissful ragdoll physics to crash into oncoming traffic. Others need you to 'escort,' protect a deal ('Trafficking'), or just cause carnage ('Mayhem'). Like the multiplier system, many of these pursuits will require you to continually perform tasks to keep up steady cash flow so that you can aim for high scores. 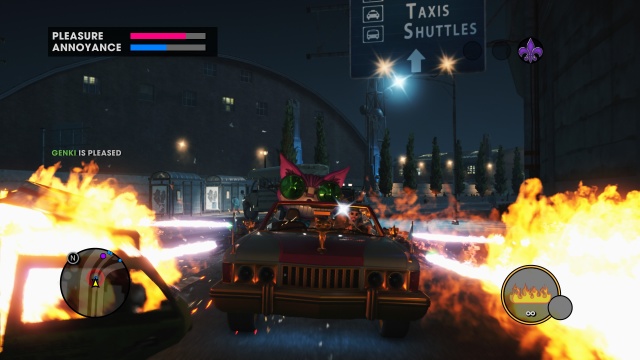 Although miscellaneous at first, there are also 'Diversions,' which make up the more immersive side-distractions of maintaining a criminal conglomerate. You can buy properties and businesses like clothes stores to contribute to an hourly city income. There are also 'Assassinations' and 'Gang Operations' to take back territory. More petty criminal actions include mugging and hostage-taking, which can be done during free roam. Of course, there are even more diversions, not to mention the collectibles littered throughout the map. These are here to ensure that you are kept busy - in the entertaining ways described here.

For returning veterans and skeptical newcomers, the observation of the visual department will be the critical critique. Thankfully, I can confirm that the upgraded graphics look truly stunning. This is how to remaster - to make it look totally distinguishable from its original release. The most significant cause for celebration is the lighting. During the day, the streets radiate with a hazy autumn brown glow reminiscent of GTA: San Andreas' aesthetic. At night, the city is drenched in neon colors of all different kinds. These tints never fail to amaze me. Even if the map is small, the same old sights will look dynamically beautiful depending on the in-game time. I ended up taking tons of screenshots to capture the glorious rain puddles, reflections, and various illuminated signposts. This utilization of global illumination does wonders for an art style that actually looks like it had art direction. 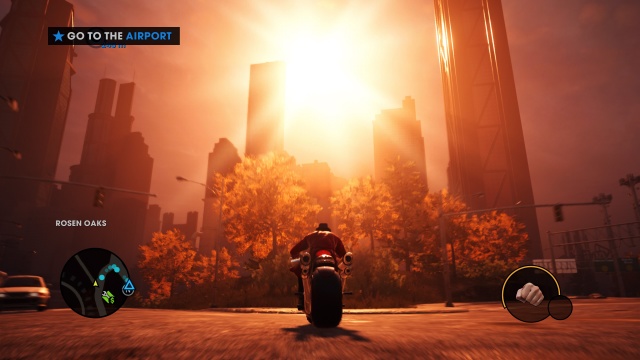 What is even more incredible is that Sperasoft totally reworked all of the textures. The most noticeable of these are the facials. Instead of the cartoony faces of the original, the cast appears more realistic now. While I prefer this new look, some capacity for facial expression is lost in translation. Some characters look more stone-faced in cutscenes than others, but the result is more than a welcome change. Vehicles and guns also seem more detailed than ever, and there is a lovely-looking motion blur to compliment everything. And while it all runs at only 30fps, is it really that big of a deal? It is still quite a feat to make a title from 2011 look this good.

There is also something to be said about the excellent soundtrack. Radio stations feature acclaimed artists like Talk Talk, Faith No More, and Mastodon. Some missions will also play licensed music, the most famous example being the penthouse raid 'Party Time,' which blasts Kayne West's song 'POWER.' You will be hard-pressed to find such fitting usage of beloved tunes.

With all its glitz and glamor, there is a lot of ugliness in Saints Row: The Third. As touched upon earlier, the game is raunchy to the point of indubitable disgust. The main story can also drag, with the 'Guardian Angel' mission being infamously boring and difficult. Also, you will often see enemies spawning into your vicinity from thin air, and your 'Homie' companions may experience path-finding issues. Ultimately, though, these issues are overshadowed by the positives.

Although I was not able to test out the co-op, I remember it being incredible. Wearing novelty costumes and wreaking havoc with a friend is an undeniably joyous time. Whether helping someone with a tough section, holding out in horde mode, or grinding money/respect, this is one of the best cooperative open-world experiences. 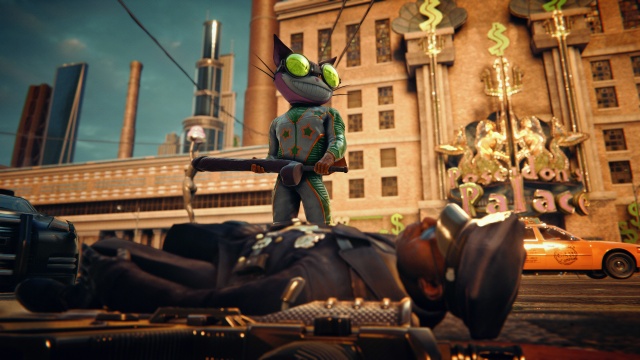 Like the Switch port 'The Full Package,' this comes bundled with three DLC mission packs. The first of these is the underwhelming Genki Bowl VII. This is a continuation of the depraved, mascot-murdering game show. You get different variants of the instances you know, but that's pretty much it. The two subsequent packs are more noteworthy. 'Gangstas in Space' has three missions that have you acting in a cheesy sci-fi film helmed by an unpleasant director. Finally, there is the delightful 'The Trouble with Clones,' which has you trying to find a 'brute' (mini-boss) clone of Johnny Gat. These pieces of additional material, although only clocking around at two hours each, still adds to the tremendous value of this package.

Saints Row: The Third Remastered is one of the most entertaining open-world games ever made. It may be clich�d to say, but you will be having hours of fun on end with this sizable package. To top it all off, the new visuals are comparable to an old statue being restored to newfound magnificence. The lighting and new textures will genuinely impress you, and the chaotic gang warfare is a blast, whether in co-op or alone. Overall, this is an urban escape worth experiencing, both for the first time and all over again.

Final Rating: 85% - Saints Row: The Third Remastered completely redoes all of the visuals in glorious 4k. The lighting, in particular, will be sure to amaze you.