Modern survival games are hit-or-miss. The misses tend to make you endure monotonous gameplay within dull and uninspired sandbox worlds. Windbound wafts in the direction of an inspired open-world title, but is held back by the pitfalls of the survival genre. Its aim to be soothing is undermined by the stress of inventory and hunger management. In short, it’s hard to recommend, but those looking for a lovingly stylized art style will be pleased.

The game opens on a storm. A young warrior named Kara is trying to handle the harsh waves of the ocean and calls out to her fleet. Suddenly, a gigantic sea monster appears and destroys her vessel, leaving her shipwrecked. She washes ashore on one of the ‘Forbidden Islands’ and is forced to survive while trying to find her way back home - a journey that also encompasses learning about the mysterious history of Kara’s tribe. While this set-up is familiar, there are intriguing secrets to uncover to reach a better understanding of the lore and feel of this world.

You awake on a procedurally generated island where you’ll need to gather resources. From the get-go, picking up grass and rocks and other such items may come naturally to a seasoned survival player. However, the frequent lack of food and sources of crafting will come as a surprise since resources are limited on each island. When everything needed is gathered, you should craft/enter a boat of some kind and set sail for another temporary haven. I admire this loop in contrast to staying in one place and cutting down trees all day, even if repetition still rears its ugly head (more on that later.) 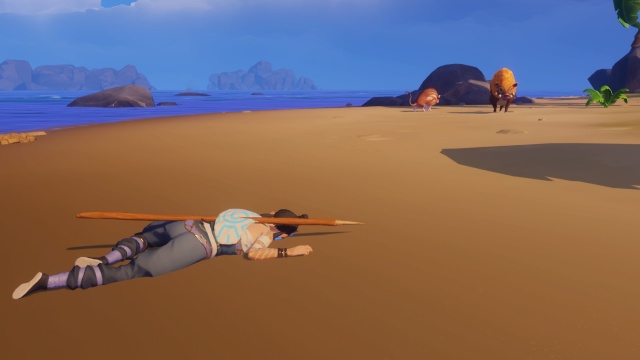 Wake up, it’s time to gather

Be prepared for a long haul because Windbound will have you traveling great distances to get to different islands. I’ve rarely experienced seafaring this prevalent and at the forefront within a game’s travel system. While getting from point A to B, you will need to also dodge coral reefs that could damage your vessel. A notable moment was being attacked by a shark-like creature - I’ve personally never been so shocked by such an encounter since Crysis. However, it’s mostly a peaceful part of the game, and very meditative. You also have options - if you can manipulate wind direction properly, go with a mast. For me, that was too tricky, so a simple canoe sufficed. You can also construct a hull for extra protection and containers for storage - it all depends on your needs, which is an intuitive range of choices for how you want to traverse.

Dealing with sea beasts and protruding ridges aren’t your main concern - it’s deciding which island to head to next. Your main goal is to activate three towers, and the draw distance hampers that. You can barely see anything that’s in the distance and, when you’re able to spot a location of interest, it’s often obscured by clusters of rock within the middle of any given set of islands. The best thing is to circumnavigate, but it’s troublesome to do so with the unforgiving wind mechanics and hazy map (no mini-radar too!) Another major flaw with travel is its tedium - Windbound aims for meditation and relaxation in these drawn-out segments. However, a sense of hopelessness always prevails when you get to larger areas and become lost and hungry. Still, I did feel quite soothed during my initial canoe ventures, and the images produced by the dawns and dusks were akin to visual poetry. 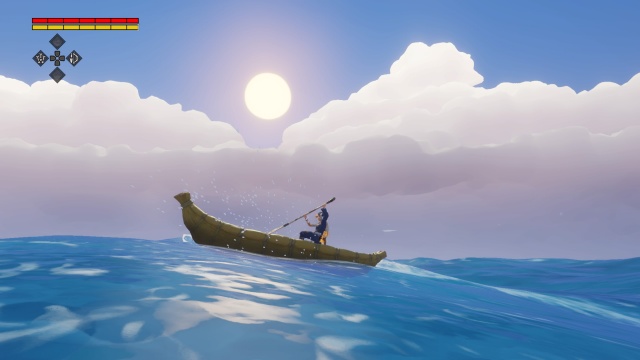 Sailing takes me away

After the arduous but striking sea trips, let’s get back to land. Flora and fauna range wildly between the different environments. You could discover an island that looks like something out of Ghost of Tsushima - home to bamboo and an aggressive creature called a ‘Plainstalker.’ More common is the more tropical-looking places with palm leaves, boars, and their nearby parents, the ‘Gorehorn.’ Each beast yields useful loot integral for crafting stronger equipment and boat components, but it takes courage to take them on. The biggest creatures have hefty health bars and take time to be fought against. If you can get past the wonky, death-causing camera and simplistic combat, you will find it triumphant to finally topple a big animal. Your arsenal includes spears, bows, and slingshots, including a few mystical weapons with their unique effects. The combat is like a bite-sized Breath of the Wild, weapon-breaking and all, but it’s competent at least.

Both in and out of fighting you will have to keep a watchful eye on your stamina/health bars. Hunger reduces your stamina and can even cause you to starve if it drains enough. Eating meat (especially cooked over a fire) and berries/mushrooms will help you to regain energy and even some HP. What’s better are hidden stones you can find to increase these overall gauges. However, hunger decreases stamina way too rapidly, and it can creep in stressfully when you’re out on the water. This is why I recommend the easier difficulty. When you die on ‘Survivalist,’ all stuff in containers (bags, on-ship baskets) disappears, and you have to start from the beginning of the game. However, on ‘Storyteller,’ you get to keep all of your inventory and progress. It just seems like masochism to tackle the harder challenge, and the flaws of the game will be more apparent than usual.

The game is made up of several chapters. To complete one, you will need to locate the three aforementioned towers that each have a ‘Nautilus Key’ that will unlock a portal. Entering this will show you an ambiguous mural that builds upon the story. After that, you will need to swim down a narrow crossing where the very same giant sea creature will try to chase you. After successfully evading it, you can activate a ‘Blessing’ that gives you a passive buff on your playthrough, which adds a rogue-lite spice to the mix. Finally, another portal will open up to a new archipelago. Each chapter will, in turn, have new islands and animal types to discover. Unfortunately, the map size gets bigger and that seafaring frustration kicks in. At least there’s a sense of surprise to look forward to in the new content, even though the routine of crafting, killing, and climbing the towers may wear on you quickly. 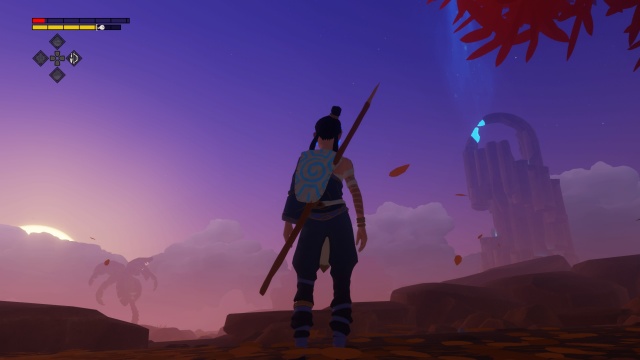 Despite its considerable flaws, Windbound can be a genuinely gorgeous game. The sights caused by the day/night cycle look superbly natural for something procedurally generated - the best-looking of its kind this side of No Man’s Sky. There may be a lack of detail (no footprints in the sand and other such surfaces), but the visual style is great screenshot material. There’s also the music - while I think it leans too heavily on its Zelda influences, some of the more tribal horn arrangements are effective to hammer home the theme of ancient mystic culture. There are also some well-written fractures of the tribe’s tradition you can read at monument sites and the towers. However, Windbound should have took more inspiration from Horizon: Zero Dawn and less from that Nintendo-published fantasy - that influence could've benefited the overall theme far more.

Windbound’s direction blows in the wind. It wants to be a relaxing seafaring simulator, an unforgiving survival struggle, and a haunting tribal tale all at once. As such, you will have a polarizing experience depending on what you look for - and this is a mixed bag. But, even if you want to give up after going in circles or dying of hunger, the colors and stunning vistas you shall witness will surely sweep you away.