Cold Symmetry clearly understands its influence. Out of most Souls-like games, Mortal Shell seems to truly feel like its original source in terms of ominous atmosphere and art direction. This similarity also extends to the gameplay, although with more mixed results. The combat aims to be fast-paced like Bloodborne, but somehow carries the sluggishness of Dark Souls 2. Besides that, and a few other flaws, this is a haunting action-RPG set within a wonderfully dark fantasy world.

You play as a 'Foundling,' a skinless figure who awakens in Fallgrim. After exploring an airy space in the tutorial, you start off in Fallgrim Outskirts - a wet forest. Since the story is vague, you will have to piece together plot points and decipher plenty of cryptic dialogue from various NPC characters. The voice acting is weirdly captivating, and the pieces of lore scattered throughout are well-written. 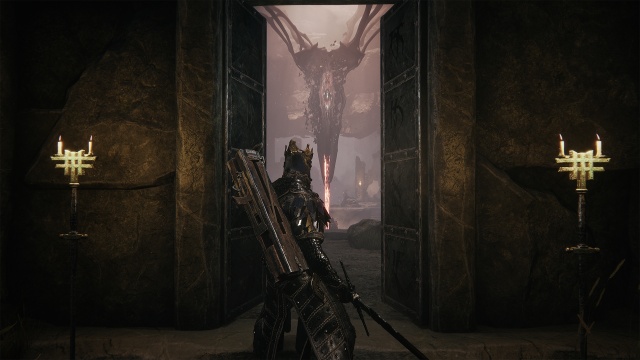 The cardinal starting point will be the search for a 'Shell.' The Foundling can inhabit the bodies of fallen warriors. There are more than a few, all with their individual builds, 'Abilities,' and other quirks. For example, Eredrim is a hulk of a warrior with a lot of health but very little stamina (he can also only roll and not dash). On the other hand, Solomon is more balanced and can do a dash as well as a dodge. There is also a fantastic mechanic linked with this system. If you lose all of your health, you are thrown out of your Shell and have to get back to it (you are killed with one hit without a Shell). All-in-all, it's an unforgettable titular mechanic.

To upgrade you will need 'Tar,' which is the equivalent of 'Souls.' Another integral currency is 'Glimpses,' a valuable pick-up that only occasionally drops from enemies and is rewarded by defeating bosses. Glimpses are tied to the Shell you collect them from and cannot be dropped upon death (you will still have to collect your lost Tar in the spot you died). This binding factor is irritating because you could use a lot of Glimpses on one build and have none for the other (if you find a better one). Ultimately, the currency is spent on Sister Genessa, who is the substitute for a bonfire. Whenever a new ability is unlocked, an excerpt from the warrior's past life is read, and joining these fractured fragments up is my favorite part of this process.

However, I have mixed feelings about the progression system. Mortal Shell disposes of traditional RPG leveling in favor of predetermined buffs. These are mostly passive and chance-based, including 'chances for additional Glimpses' and 'a chance to lose stamina instead of health.' There are some genuinely helpful ones - I will mention them later - but still, I would have preferred a good old-fashioned increase to health or stamina any day. Perhaps it is for the best since the game's difficulty pales in comparison to Souls games. I managed to beat most areas with only one or two abilities equipped. 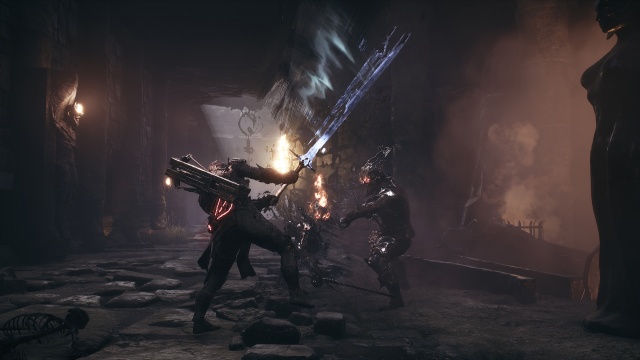 Overall, I don't mind the lack of difficulty, but the Dark Souls' growth and adaptation are sorely missing here without experience points. The closest I could get to this feeling was to buy from the vendor Vlas and purchase weapon upgrades for smithing (increased damage, etc.,) but these were already in plentiful supply throughout the world, and I maxed out my starting sword in a short time. The subsequent weapons I discovered also did not feel as balanced as the 'Hallowed Sword,' so I used that throughout most of my playthrough. Consequently, I did not feel much progression using the same weapon to cut down most of my way. Still, at least the various Shells injected some variety in their differentiating stats, even if there are only a handful.

The equipment system is very take-it-or-leave-it, too. Every consumable is in limited quantity, and there is nothing like a regenerative healing item like an Estus Flask. Thankfully, items are abundant throughout the map and can be picked up again if you wait long enough and revisit their respective spawning spots. There is also a neat 'Familiarity' system that increases the effectiveness of an item with each usage. What's not so nifty, however, is that you need to use an item at least once to reveal its effect. This is an afflicting stipulation because you could use an ultra-rare item for the wrong situation or even damage yourself with a poison effect. There's no point to this when you could search for the item's effects in a guide. Coupled with the lack of a pause button and cumbersome quick-item shortcuts, managing your inventory is more of a hassle and a bore than anything else.

Another standoffish omission is the lack of fast travel or at least no mention of it. After each boss was slain, I would have to run all the way back to Fallgrim Outskirts and navigate a convoluted space to get to the next big baddie. Running past all the fodder was irritating, especially when the hub area's 'Brigands' were replaced with 'Ghouls' that leap on you from every direction (which plays an overlong animation of your neck getting bitten.) Sadly, this annoying onslaught doesn't get any better with the following areas. Every locale seems to have a lack of enemy variety, and there are just too many things trying to kill you. At least Dark Souls interspersed grand sights with well-placed enemies - Mortal Shell bombards you and doesn't give you the time to take in the sights and breathe. 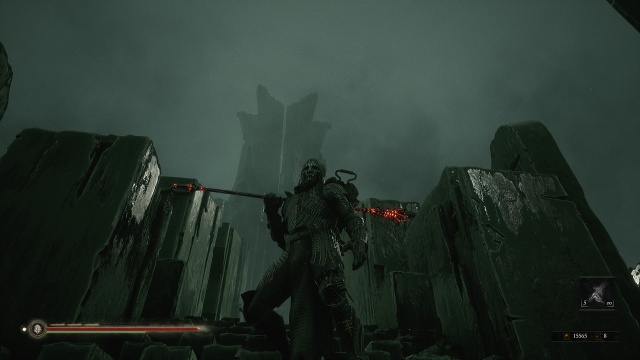 It's not a complete slog, however. The visual splendor that oozes from the dark corners of this medieval universe is a treat. Enemy design is horrifying and imaginative, giving encounters a sense of dread. And while many of the locations are a little bit too compact for my taste, a couple is breathtaking. A highlight is the 'Seat of Infinity' area - which includes jet-black stone plains covered in Tar, wildly maligned structures, a near-destroyed castle, and all topped off with an evening sun shining radiance on the otherwise bleached surfaces. I wish more locations were this grand and open, but this place is at least in the game.

And now we come to the gameplay. You're in a full set of armor, and you carry a ton of Tar, so the combat is suitably cumbersome, for better or worse. Positively, combat feels impactful. Each blow includes a crunchy effect that feels utterly satisfying. Concurrently, it feels a bit like you're swinging through the mud. Combat can also fall into a roundabout routine of waiting for an animation to play out only to make a sprinting attack. Overall, though, there is something still empowering to swordplay. You can make parries that can restore health and 'Resolve,' the latter of which is a meter used for performing devastating special moves (topped off with stylish animations showing your weapon shifting into a different form.)

The crowning achievement in Mortal Shell's battles is 'Hardening.' This is an ability that allows you to harden your Shell, which can block any kind of attack. Since there is no block button, this is an imperative inclusion to utilize. Besides being incredibly useful, it also looks badass, making up for the occasional awkwardness. You can Harden at any time - even during an attack! This leads to a sort of elegance that allows the combat to be starkly beautiful. One part of dodging is also inherently an instance of hardening, making it the best dodge in any Souls-like game to date. 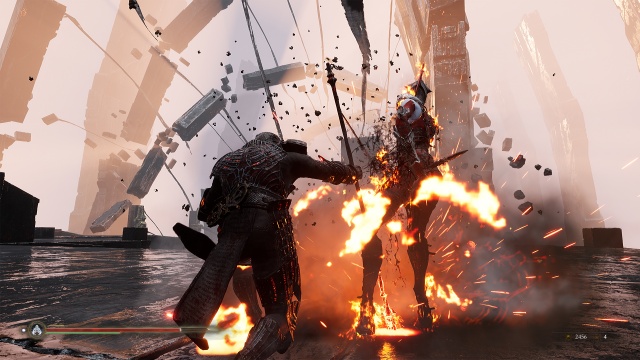 Bosses are also quite engaging and fair. You will face off against a dual-wielding warrior with an asymmetrically conjoined twin and a martyr who slides on ice, just to name a couple. Like the Shells and weapons, there is only a handful, though. However, this 12-15-hour adventure feels doable and compact. It ends and does not outstay its welcome, and there are always more opportunities for a shell-less run or a new game plus mode. Even if it glaringly falls short in a few areas, it's a nicely compact experience.

Mortal Shell is an AA game with an abundance of atmosphere and neat ideas. While many of these ambitions fall short in execution, its titular shell system is daring and fluid. It could have benefited from more polish and accessibility, but this action-RPG is more than adequate in its admirable approach to the Souls-like formula.

Final Rating: 76% - Mortal Shell is more than a husk of tired Souls-like tropes - it tries to do something different and does so with ardor for its source material.