No Straight Roads is a stylish chimera of a game. Its ambition lies not only in delivering musically-guided gameplay, but also to drop you into a world where sight and sound combine into forming a thoroughly captivating sensual experience. While it does not land those gameplay notes, it strikes a sweet chord with its aesthetic and likable characters.

The game is set in Vinyl City, a boiling pot for music connoisseurs and aspiring artists. However, the capital is controlled by the music label NSR, the titular antagonistic force that ensures that only electronic dance music (EDM) dominates the commercial charts. Mayday and Zuke are the indie rock duo Bunk Bed Junction, and we are introduced to them when they participate in a music audition held by NSR. After they ace their performance, rock is banned, and our heroes decide to take down NSR’s corrupt monopoly. 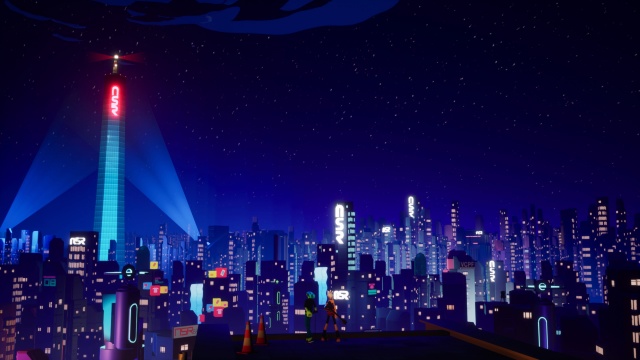 This story speaks veritable volumes for the state of today’s music. With chart-toppers increasingly sounding like manufactured products rather than art, it is no wonder a genre such as rock would fade into obscurity. No Straight Roads encapsulates this with the Draconian system that they enforce upon the music industry and even the city (echoed by NPCs throughout.) When things get deep thematically, you can always fall back on the bubbly personality of protagonist Mayday, a genuinely lovable and energetic rebel. And while I am not particularly fond of her band buddy Zuke, I appreciate the dichotomy his laid-back personality brings to the dynamic.

You may find some discordance in the third-person action. An ambitious gameplay mechanic is used where enemies sequentially attack to the beats of music playing. However, it seems more like a gimmick than anything else, and it could be smoother in execution since attacks aren’t always consistent with the rhythm. Enemies are also unengaging since they mostly consist of insipid NSR security bots. While there are several ‘Mods’ (special moves) to equip and a few finishers called ‘Ultimate Duets],’ but gameplay devolves into bashing things with a guitar or drum sticks until they explode. 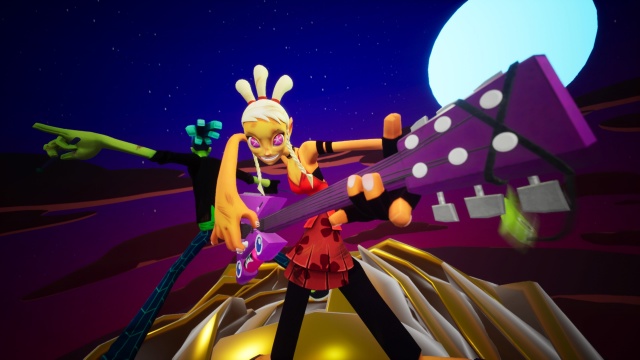 Compare the gameplay to Media Molecule’s Dreams. In the campaign ‘Art’s Dream,’ much of the mechanics and interactions are musically-charged. In particular, one segment has you battling enemies with a guitar that strums, thereby actually letting you play music as you use the weapon. Sure, you can also shoot by playing your instrument in No Straight Roads, but it barely makes a sound and has no impact. Coupled with the poorly implemented synchronization mechanic, the musical theme feels hardly in tandem with the gameplay.

While it failed to mesh in a concrete way with what you’re doing, the score itself is catchy and surprisingly consistent. Since EDM has taken over, the number of sub-genres it spans are extensive. From psybient to neoclassical, these are sounds I have never heard in a game until now. This is something special - a soundtrack and story aimed at music fans. Thankfully, its harmonies resonated well with me, and I bet it will do the same for others, too.

The main draw in both gameplay and musical departments is to defeat NSR’s five superstar musicians; each has their own few phases, musical styles, and unique personalities. In a time when presentation is no longer key in gaming, it was a pleasure to see cutscenes play out every time I defeat a phase. This brought me back to old-school PS2 games of my childhood, particularly ones that felt like you were playing a Saturday morning cartoon. The camera may not be movable, and enemy attacks feel spammy and poorly parryable, but they are a blast to fight against. Whether that may be the piano prodigy or the digital mermaid girl, I am looking forward to facing them again in the harder difficulty modes. 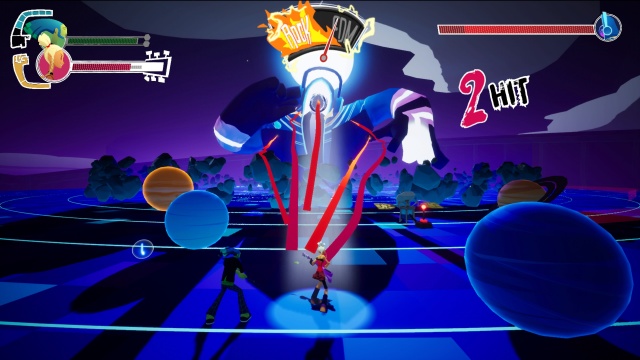 In-between taking down this evil corporation, you’ll be running around Vinyl City. By exploring its districts, you might find ‘Qwasa,’ which is the city’s energy supply. You can use it to power up broken soda machines, lamps, etc. By doing this, you will earn new fans in addition to clearing stages. After earning enough of a devoted following, you should jam at your sewer hideout. Here, you can slap found ‘Stickers’ onto your instrument for increased damage, health, etc., and change your Mods and Special Duets. With the fans you’ve collected, you can go to an ‘Underground Gig’ and upgrade your skills. It’s a reasonably good lite-RPG system that makes the combat a little more worthwhile, and I loved hanging out in Bunk Bed Junction’s home. You can even play an arcade game, participate in interviews, and show off your collectibles!

Presentation-wise and artistically, No Straight Roads succeeds and then some. It has a distinctively Persona-like vibe, and it nails that to a tee. Vinyl City and its many districts have an Eastern influence, there are funky bass-heavy tunes, and the character portraits within dialogue are varied and expressive. There are also different art styles - during TV broadcasts, you’ll notice a stylish hand-drawn aesthetic, and the different sorts of concept art when clearing a stage is also awesome. While the in-game animations pale in comparison, the visual prowess on display is, overall, awe-inspiring. 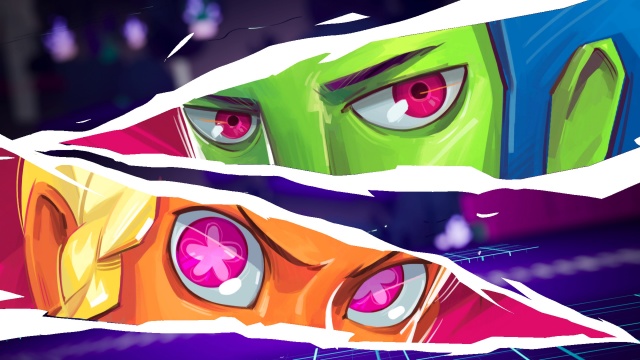 No Straight Roads is a charming celebration of music with a polished flair for exposition that kept me thoroughly impressed. While the third-person combat is palling, other elements such as co-op and well-crafted boss stages just about make up for that. And while it only lasts for six hours, this action-adventure burns out and does not fade away; it rocks.

Final Rating: 77% - No Straight Roads is a straight and narrow track of a game - a trip with a mostly clear direction and pretty sights along the way.