You wake up from your short slumber to the howl of thunder. The rain perpetually pours and the ship sways ferociously. Around you are your fellow survivors starving, panicking, and slowly losing their minds, fearing the monstrosities that lurk in the decks below. Requiring food and supplies, you load up and take the elevator down, braving the horrors that await. This is Dread Nautical, a survival horror-RPG with roguelike elements. Ambitious in ways both compelling and flawed, it mostly succeeds in immersing you in a bleak situation that lives up to the titular feeling of 'dread.'

A luxury cruise ship called Hope is suddenly transported to an alternate realm where a storm endlessly brews and a monstrous scourge starts to take over. Passengers are turning into lifeless husks with scaly skin and bellies filled with corrosive bile. Equally as grotesque are the various monsters that range from the spiked bipedal 'Roller' to the hellish giant 'Behemoth.' Your goal is to survive by recruiting fellow passengers, finding food and weapons, and upgrading. And maybe you will uncover the mystery behind what is going on along the way. 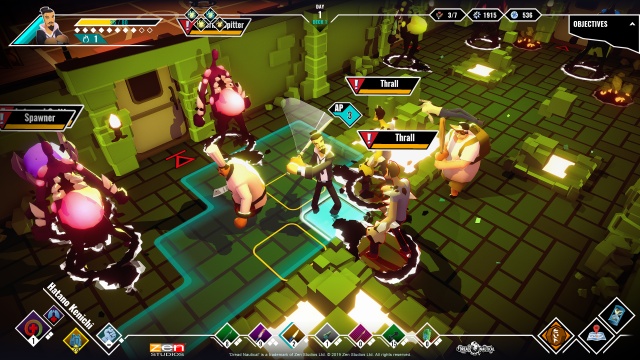 You pick one of four characters: lounge singer Miraje, former Yakuza member Hatano, gamer girl Vi, and detective Fargo. These archetypal protagonists are all fully voiced and a pleasure to play as. I picked the foxy lady Miraje whose fashion sense looks something right out of the 1970s. These characters also have different starting stats, one special passive boost, and two unique abilities. This selection gives you an auspicious start to shaping your playstyle because of the diverse skills, even if the stat differences are minor in the long run.

The game is tile-based and turn-based, fueled by 'AP (or Action Points)' that determine how much you can attack and move. Think of it as XCOM with more of a survival spin on things. You will be using weapons found throughout the cruiser. These range from melee types like paddles and harpoons to a ranged arsenal, including throwable brass balls and guns. Weapons also deliver more than just damage - some can knock back an enemy a tile or two, stun, or cleave with a 360-degree spin that hurts multiple enemies. It is a satisfying and deep combat system that will test your tactical capabilities. Damage bonuses are granted with sneak and flank attacks, which makes you take into account movement patrols and become stealthier. Durability is a significant factor to consider too. In essence, weapons can only withstand so many attacks, so you might have to finish off an enemy with a bare-knuckled punch for conservation.

Conservation is the name of the game. You will find three essential resources: 'Scraps,' 'Runes,' and 'Food.' Scraps are what is needed to repair and upgrade equipment as well as to craft consumables. Runes are used to augment attributes to your liking. And, finally, food is pretty self-explanatory. It is what you will be feeding to your team after each day passes. If they go hungry, they will start a new mission slower and with less health. All of these things are spent in the 'Lobby,' which is your haven between levels. Here, you use upgradeable benches for each respective currency and prepare your loadout before heading out. It is harrowing to decide on how to spend these resources and when to ration food. This is especially apparent on the harder difficulties, where permadeath is enabled. Although I wish the feeding system was beyond mechanical and more emotional/moral like This War of Mine, resource management is a pulse-pounding addition. 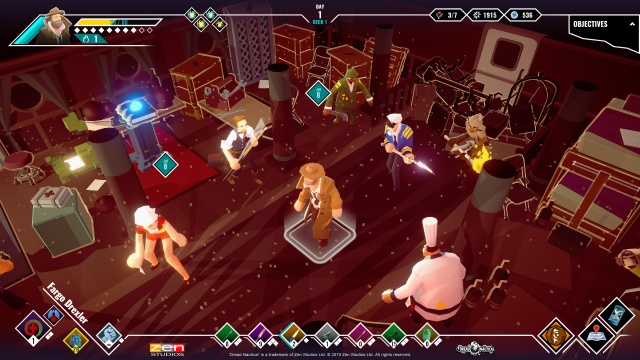 Exploration works quite well too. Levels are split into 'Decks.' Rooms and survivors are randomly generated, and so is loot. Stuff can be found in cabinets and other containers, indicated by a yellow sparkle. Items are ranked by colored rarity, and the more valuable loot can be found in rooms unlocked with a hidden 'Special Key.' As you discover more places, they are added to the floor plan map. Once you are done exploring, the endpoint to each section is the Bridge, where you sound a foghorn that knocks you unconscious and takes you back to the lobby. Decks can be replayed if you need to want to grind for loot or find the secrets you missed. These secrets in question are 'Tome Pages' that are ambiguous sentences deciphered from an alien language. They can help you unravel the plot.

My favorite part is recruiting survivors. The game uses a multi-choice dialogue system that affects your 'Reputation' depending on the response. If the reputation meter is filled, the person will join you. New objectives given by strangers can also boost their view of you if carried out successfully. Dialogue is pretty kooky - new characters rarely introduce themselves to you, and conversations mainly consist of short but strange questions that reflect the ongoing insanity experienced by the crew. Flattery and agreement are the best options - which can get vapid if you really want to answer in your own way. If you answer too honestly with someone you are infamous with, for example, they will punch and damage you. Many encounters were quirky and intriguing, making me excited for any new or existing personalities to meet. It does not hurt that character designs are strangely charming. Mouths do not move, but facial animation is expressive, and the voice acting is thoroughly enthusiastic.

Visuals are lovely all-around. Lighting can be both vibrant and moody. The deep blues of a bar pop out while the pale light of the lobby penetrates dust particles while leaving the rear of the room in darkness. This duality is reflective of the art style and what Dread Nautical achieves with its atmosphere. While the game is colorful and cartoony, it manages to be bleak and ominous. This is bolstered by a dark ambient soundtrack that I wanted more of - mellow electronic beats play until you enter a battle - which then turns into an almost unnoticeable drone that ramps up the tension. 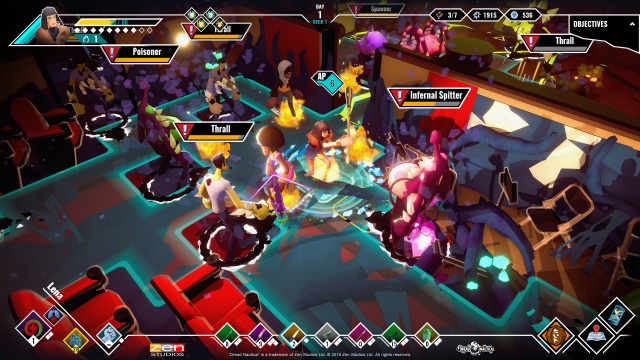 A few problems I have with the game are considerable. First, there is the plot. While the atmosphere is well-done, the expository, narrated cutscenes that appear every five decks-or-so sever my investment in how the story unfolds. What it turns into is a cliched, dumbed-down take on Lovecraftian horror that hampers the mystery and intrigue. On the gameplay spectrum, the camera controls are jerky when selecting things, and the interface is cumbersome. It doesn't come as a surprise to learn that this game was originally debuted on iOS, because I bet touch-screen controls worked much better. Unlike XCOM there is little room for item usage error - if I accidentally throw a Molotov at my teammate, no warning message appears beforehand. Overall, this port could have been more user-friendly.

Dread Nautical is a game that will submerge you in its creepy atmosphere and turn-based intensity. With plenty of colorful characters to recruit and an abundance of replayability, this is one ship that should not be abandoned.

Final Rating: 80% - Can't play XCOM Chimera Squad because you don't have a PC? Dread Nautical is the next best tile-based strategy game.