In the late 80's/early 90's side-scrolling beat'em up games were a natural part of the arcade experience. Without beat'em ups, we wouldn't be playing fighting games so they are an important part of video game history. Double Dragon or Final Fight along with Streets of Rage 2 are often brought up when players are asked about their favorite beat'em up game. The Streets of Rage series was SEGA's answer to their beat'em up competitors and it's a series that had an overall good run and spawned one of the best beat'em up titles for the system. Streets of Rage 4 is a revival of the series and a direct sequel to the other games. The game is developed by Dotemu, Lizardcube, and Guard Crush Games.

Streets of Rage 4 (SoR4) picks up 10 years after the events of SoR3. After the defeat of Mr X, Wood Oak City enjoys a brief period of peace before falling under the control of a new crime syndicate headed by Mr X's children (the Y twins). They plan to get the city under their control through the use of hypnotic music. Before long, Axel and Blaze are back on the scene to bring order to the city and they bring along newcomers Cherry (Adam's sister) and Floyd (a cybernetically enhanced assistant to Dr Zan).

SoR4 has a style that is very different from the other games in the series but pays respects by upgrading many of the character sprites and locations from the old games. The same developers that worked on Wonder Boy: The Dragon's Trap also did SoR4 and they brought in some smoothly animated sprites for this game as well. The game is colorful and full of detail. All sprites have been updated. It's amazing what they have done with Axel's sprite to liven him up - he now looks like he just got off the couch from drinking a beer and is ready to kick some ass. Enemy models have all been reworked from previous games as well - some enemies look around the same and some have undergone some heavy makeovers. Backgrounds are littered with detail and each stage has its own unique effects, such as character shadows from lighting or character/enemy reflections in puddles of water. As usual, there are many containers to break open for extra items. There are also a few areas that will take you to retro bonus stages.

The overall gameplay is familiar at first, but has a few added mechanics this time. All fighters still have unique attacks that are locked down to certain commands and they all have their own attributes. Every character has the usual move that will drain health while performing it as well. New to SoR4 is a super attack that is limited to a number of stars collected throughout the level. This move will cause your character to perform an attack that will knock enemies out of their attacks and give you invincibility while performing it. 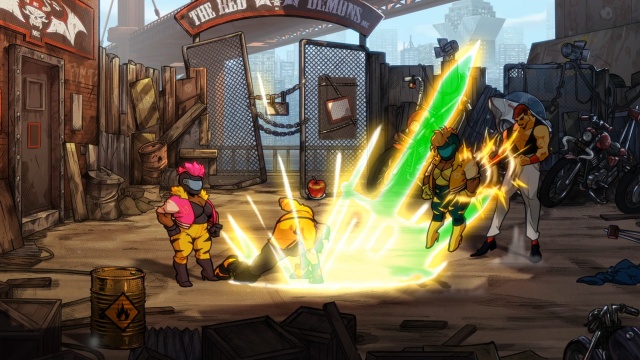 SoR4 allows players to juggle their opponents. Once knocked back, enemies can be juggled with attacks while they fall - this is incredibly useful in corners. Juggled enemies seem to take heavy damage and this will also help to work up your hit gauge. Juggling is nearly required to beat bosses. The hit gauge constantly rises while attacking your opponent and will reward players with bonus points once the gauge is exhausted (either by losing the combo from time or getting hit). Just like old-school beat'em ups, achieving a certain amount of points will give you an extra life. SoR4 actually notifies players of incoming extra lives much better than past arcade games - the game will tell you how far you are away from your next extra life constantly as you approach a higher score. The notification really helps out while playing on harder difficulties.

The game has a story mode, a boss rush, battle mode, and an arcade mode. The story mode takes players through all the levels in the game as the game's main story is told. The story is told through still pictures that are animated in sort of a comic book format. All levels have some sort of big fight near the end. You only have a certain amount of lives to make it through the levels, but you have the option to continue and can gain bonus lives through your scoring. Once the game is completed, levels can be selected to play again and extra difficulties (total of five) are unlocked. The other main mode that players will want to check out is the arcade mode, which challenges a player to get through all stages with a limited number of lives. The game tallies up your score at the end of each level and grades you - this information is saved, so you can always try for better later.

The game has some major difficulty spikes at times. During later levels, the game starts throwing in enemies that like to stand at a distance and then suddenly lunge forward and attack with a quick attack. Since the game constantly tries to pin you down with enemies, the newer enemies can get quite frustrating if you don't have good crowd control. It's all manageable though, even under the heaviest amount of pressure, but it sure can take some discipline and strategy when it comes to the hardest difficulties. All of this is probably music to the ears of hardcore gamers, but more of an earful to casual games, so it really just depends on you. I actually enjoy the game's overall difficulty myself. 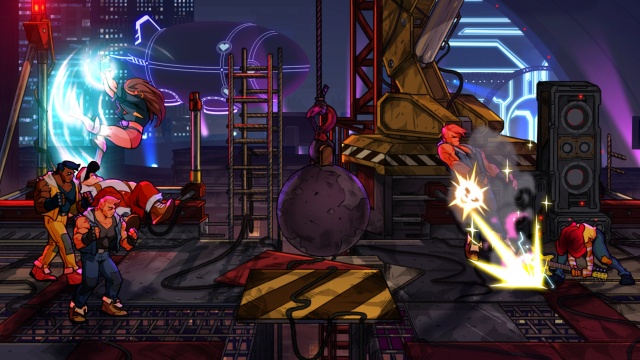 The music was a big part of the older games. In SoR4, the music is overall good, but it never does truly reach the greatness of the older games. Its soundtrack is full of techno tracks just like the older games. SoR4 has its own tracks and a classic set of tracks. The game can be played with two players, both online and offline. All modes have the option for two player co-op. The game also has a huge number of secret characters. I have a seen a total of 12 extra characters (13 if you count the one unlockable from story mode). Original character designs from older games are brought back for many of the secret characters. Sadly, some characters do not get a new sprite when they return such as Skate and Dr Zan. It would have been great to have a playable redesign of all character since this game is heavy on the fan service otherwise.

Streets of Rage 4 is so very addicting and the game is full of old school beat'em up goodness. The game has tons of references to past games in the series. SoR4 is also very replayable. Secret characters are unlocked based on the total tallied score of all games played, so you have to grind to unlock them all. It's quite fun to experiment with each character - older characters play just like they did from the game that they were originally from. If you're a fan of Streets of Rage or just the beat'em up genre in general, you owe it to yourself to check out Streets of Rage 4. There is so much to enjoy and accomplish in the game that it will have you returning a bunch!

The Bad:
- While not totally bad, the music isn't as memorable as other games in the series
- Some playable characters don't have new sprites (like Skate and Dr Zan)

Final Rating: 90% - Streets of Rage 4 is a great throwback to old-school beat'em ups!