Ni no Kuni: Wrath of the White Witch Remastered Review

You know that feeling when you start a game and you know you're in for a treat before the gameplay even begins? That's the way Ni No Kuni was for me. Ni No Kuni: Wrath of the White Witch Remastered Edition is the PS4 rerelease of the original Ni No Kuni: Wrath of the White Witch for PS3 released back in 2011. Alongside the Remastered Edition, the game was also released for Nintendo Switch in a non-HD version as well, and you can read about that release in this review.

Studio Ghibli does the visuals for Ni No Kuni and they definitely set the atmosphere for an overall lighthearted adventure. That's not to say that the game doesn't take itself seriously however - there are a few dark characters in the character lineup. The dialogue is presented in both spoken Japanese and English. The English is very well done and the voices fit each character quite well. The overall sound to this game is overall fantastic. The soundtrack, the sound effects, the character voices are all quite fitting. I'd compare this game's overall quality to many Nintendo first party releases. 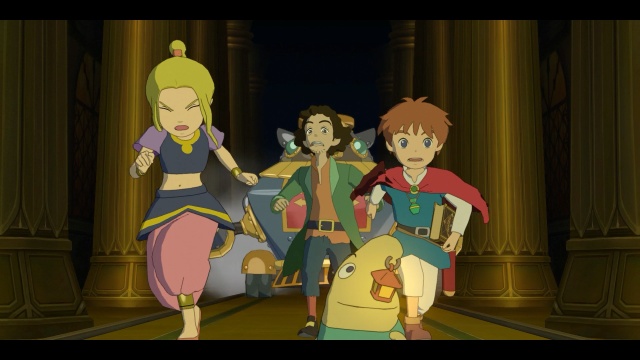 Ni No Kuni tells the story of Oliver, a young boy who sets out on an adventure to save his mother. Along with a fairy called "Drippy", Oliver learns that each person has a soulmate in another world that is tied to their persona in each world. Along with Drippy, Oliver goes to the other world to try to find his mother's soulmate and help to save that world from the evil wizard, Shadar.

The gameplay to the game is quite unique. You have your standard overworld where you'll eventually run into enemies that will trigger the usual battle sequence. Battle sequences are a mix of action and turn-based RPG. The battles sequences in Ni No Kuni are very similar to Final Fantasy XII battles. You are free to move around a 3D plane during battles in order to avoid enemy physical attacks while preparing your own attacks. Actions are issued through a command menu and each one has a cooldown period. You start out playing as Oliver alone, but gain access to familiars that can be summoned to fight battles for you. Oliver is more of a mage type of character, so his physical attacks are lacking and that is where the familiars come in. Each familiar has its own set of abilities that unlock as you get higher in level. The familiars and Oliver all share the same health bar, so it is important to switch between your familiars and Oliver in order to heal and defend against attacks.

The game truly shines when it comes to boss battles. Boss battles will pit you against a bigger enemy with more powerful attacks that you must form some kind of strategy against. Strategies for defeating bosses are learned during the boss fight as tips are given from Drippy. Every boss has a big attack that you must defend against or find some other way to avoid it. You'll be constantly switching between Oliver and his familiars in order to damage a boss and prepare for its upcoming attacks.

The game is loaded with extra quests and bounties that you can engage in for extra items. Bounties pit you against stronger enemies that you can defeat in order to get rewards. Quests are often fetch quests associated with finding a certain item to take back to the quest giver. There are also spells that you can cast during gameplay that can manipulate the environment or characters in the environment. At several points, you must take a person's good mood and bestow it upon others to keep them from feeling depressed in order to speak with them. You'll also use spells to unlock chests and doors. 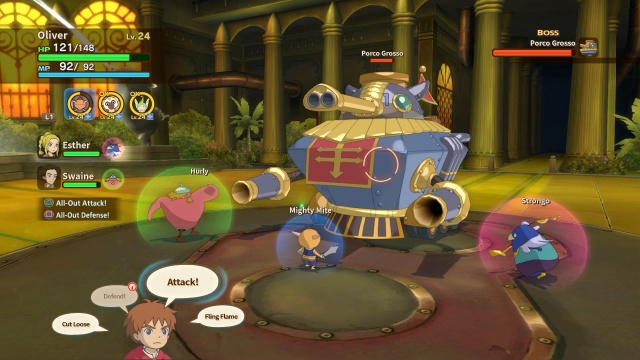 The PS4 Remastered Edition moves super smooth throughout its gameplay segments. The visuals are clear and run at a high framerate all the time. Overall, I feel the game comes out as being equal on both versions since the Switch version has the added bonus of being portable. You really can't go wrong with either version. Just ask yourself, will you be playing it on a HDTV or on the go? Either way, buy it and experience it for yourself because you will be pleased either way.

The Bad:
- Tutorials and overall dialogue get too intense at times

Final Rating: 90% - Ni No Kuni truly passes the test of time and definitely deserves its rerelease.