Like a lot of gamers who played the original Destroy All Humans, I remember the game fondly. The premise alone - that you were the alien invader for once rather than defending Earth from an invasion - was enough to make the game memorable, but the wanton destruction that you could unleash on an open-world environment with alien weaponry was what really earned its spot in the nostalgia section of gamers' minds. It's been awhile since I reviewed Destroy All Humans when it was originally released, a point driven home to me when one of our staff mentioned that he'd be curious of what I thought of the game fifteen years later. I prefer to think of the time that's passed since then in terms of console generations instead because that fifteen then becomes a two. Regardless of how you choose to measure time, a lot has happened in terms of game design and technology in the time since Destroy All Humans was originally released. In spite of the risk of ruining some fond gaming memories I strapped into the saucer once again to see if it still handled as well as I remember, but before I get into how well it's held-up let's take an introductory look at the game for those of you who need your memory jogged or who missed it the first time around. 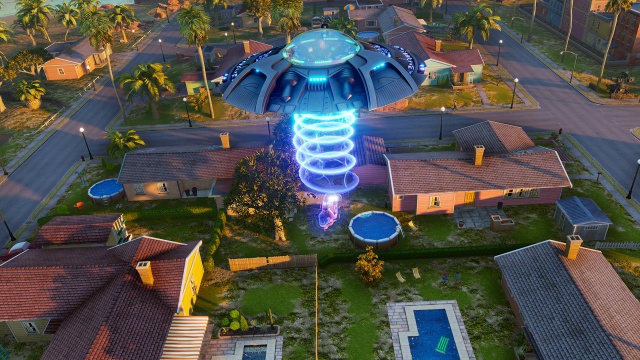 If the game's title and my introductory paragraph didn't make it clear, Destroy All Humans puts you in the knee-high space boots of a gray alien who's come to Earth to take it over. The reason this alien, a Furon, has targeted Earth is a little more complicated than a simple lust for conquest. The Furon race reproduces by cloning, but it wasn't always that way - in the distant past they propagated in the Earthly way. Untold years of cloning have taken their toll, though, and Furon DNA is starting to suffer from "copy of a copy of a copy..." degradation. Luckily for the Furon race, some distant ancestors once landed on Earth and went native Fletcher Christian style. Many years have since past, but humans still carry Furon DNA within their own, and that DNA is ripe for harvesting to revitalize the Furon race. So, the reason that you need to destroy all humans is not just to make room for the Furons, but to pluck their brain stems from their bodies for DNA extraction. Despite all of their technological advancement, the Furons have apparently not invented the cotton swab.

Destroy All Humans is set in a fictionalized version of 1950s America and is an homage to the Sci-Fi B-movies that are synonymous with that decade, although most of the Sci-Fi references in the game are about twenty years old rather than seventy. As such the story is a mix of 1950s camp and the kind of crude videogame humor that was prevalent in mid-aughts action games. The acting is intentionally hammy and over-the-top, and like the humor is funny at times but wears thin over the course of the hours that the game runs. This is especially true of the lead alien characters' voices, with Richard Steven Horvitz turning his Invader Zim voice up to 11 as the alien commander Orthopox and J. Grant Albrecht channeling Jack Nicholson for the player character Crypto. Let's just say that I was respectfully asked to switch to a headset while playing the game whenever Crypto and Orthopox began to engage in a conversation.

The Furon invasion of Earth is carried out by an army of one, Crypto, and it's executed through two distinct gameplay styles. When you are in your saucer the gameplay is focused on wanton destruction as you rain death-rays from the sky on the local population, as well as the police and army units sent to stop you (oddly enough, the humans never think to call in the Air Force). When on foot, the gameplay becomes a lot more stealth-focused as you try to complete your objectives while bringing as little attention to yourself as possible. You'll primarily rely on your brain to do this, drawing on your arsenal of psychic powers. You'll be able to implant the illusion in human minds that you're one of them, effectively disguising yourself as the person whose brain you've scanned. This power needs to be constantly reenergized or your disguise will fail, which you do by reading the minds of other humans. In addition to keeping your cover, this will also allow you to hear whatever 1950s-ish thing the locals are thinking about. Occasionally mind-reading is required to learn something, but for the most part it's just there to power your disguise and provide some humor. If another human sees you trying to disguise yourself, or you cross paths with a Majestic Agent (the game's Men-in-Black) or one of their scanners, your disguise will be blown, people will start panicking, and you'll soon find yourself facing the local police and military. Another way to keep humans from interfering in your plans is to use your hypnotize ability to either put them asleep or to cause them to create a distraction that will grab the attention of other nearby humans.

You also have some more destructive mental powers at your disposal. Brain Extract is exactly what it sounds like - you can pull the brain stem right out of a person allowing you to harness it for the DNA that serves as the currency for upgrades to your powers and saucer. You can also use telekinesis to move objects - either to throw them at people or to just throw the people around themselves. One way to quickly get rid of a witness is to lift him up into the air and then fling him into a nearby lake. Transmogrify is used to break objects down and turn them into ammo for some of your weapons, although figuring out which objects will become ammo and which will merely disappear is an unnecessarily random exercise. The interface for managing all of these powers is a little clumsy, though, so it will take some practice before you can call upon the power you're looking for in a pinch.

One thing that all of the psychic powers have in common with the exception of telekinesis is that they are all slow to use. It takes so long to disguise yourself as a human that more often than not someone will wander by and see what you're doing and raise the alarm. And the last thing that you want to do when you find yourself with an empty weapon is to wait around for an object to finally transmogrify and find that it hasn't given you any more ammo. Your weapons are also surprisingly slow to use. Your basic weapon fires arcs of electricity that you must keep trained on your target as you wait for them to slowly cook while their allies inconsiderately continue to shoot at you. More advanced and destructive weapons such as the Disintegrator Ray and Ion Detonator are hampered by low ammo capacities that need to be replenished by Transmogrify, and I've already mentioned what a random exercise that is.

The problem with all of this slow tech is that it makes it easy for you to be overwhelmed by human wave tactics, and not coincidently that is the only tactic used by your enemies in the game. Once the shooting starts, the number of enemies that spawn in to attack you quickly becomes overwhelming to the point you can't possibly keep up. The only way to survive at that point is to try to outrun the mob and go into hiding for a bit until the heat dies down. Either AI has come a very long way in the past fifteen years or the numbers of enemies have been increased in the remake to create more challenge, but either way it takes a lot of fun out of playing the game when things are this unbalanced.

Another thing that hasn't aged well is the size of the levels. It's an open world game, but open worlds have become a lot larger since Destroy All Humans was originally released. The mission objectives keep you focused on moving from Point A to Point B, but when the levels are opened for free-play it really becomes obvious how small your sandbox really is. You'll play around in them for a bit, but it quickly feels repetitive to be doing the same things over and again in a small space.

The updated version of Destroy All Humans certainly looks a lot better than the original did on two-generation old hardware, but it really needed the gameplay to be updated as well. Artificial challenge created by horde-tactic mobs of enemies, a clunky skills and weapons system, repetitive gameplay, and claustrophobic open world levels all work against the graphics to really show the game's age. The game's premise still holds up today, so it's a shame that the gameplay was left stuck in the past.