PlayerUnknown pretty much created the battle royale genre, and his game Battlegrounds (PUBG) has been around for a few years working its way through extended betas on other platforms. Now that it's been released on the PS4 it feels more like a knock-off than an original. It is uncannily similar to Black Ops 4's Blackout mode, which is a bit of a shame because if Black Out is a rip-off of PUBG it outdoes the original and makes it look like it was actually the other way around.

In PUBG, up to 100 players are dropped onto an island to fight until only one player (or squad) is left alive. You can choose to play solo in an everyone for themselves match, or as squads of two or four players. Everyone begins the game armed with only their fists and must scramble to find weapons and ammo on the island. At the start of a match, players are flown over the island in a single plane and can decide when they want to bail out and parachute to the island below. There's some strategy to deciding when to bail out and where to land. Landing in an isolated area will give you some time before you encounter other players but it will be harder to find good weapons and equipment. Head to a town or facility and you'll find plenty of weapons, along with a lot of other players. In addition to contending with each other, players will also have to contend with a map that shrinks its safe area at set intervals. Get caught outside the safe area for too long and you'll die as the game works to ensure that all the players are brought together and forced to finish the match. If you don't win the match, it's generally a quick turnaround to jump into another match and try again. 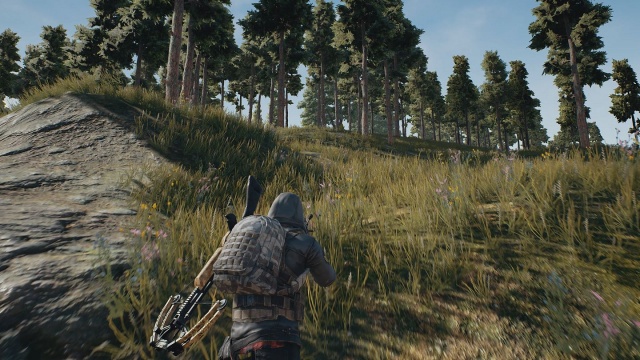 There are plenty of tactical approaches you can take to the game, and since every match is essentially a new game there's no reason not to try out different approaches until you find one that works for you. Hiding out in a building near where the safe zone will converge and lying in wait to ambush players is an effective way to ensure a relatively high spot in the final rankings, but it also means that you'll spend a lot of game time sitting around doing nothing while waiting for a player to stumble into your ambush. There will be times, though, that even the best plans can be derailed by simple bad luck, like landing in a spot where you can't get your hands on a weapon before the players who land nearby you do. This is actually one of the game's core strengths, the fact that each match is a new experience and you'll never quite know what's in store for you when you jump out of that plane. And since progression in the game leads exclusively to cosmetic upgrades, you don't have to worry about starting at a gameplay disadvantage to higher level players.

PUBG has a variety of weapons available, along with attachments and equipment. The system for managing what you've collected is awkward to use, though. If you're in an isolated spot you'll have the luxury of time to spend managing weapons and attachments on the inventory screen, but since there's no way you can even put an attachment on a weapon without mucking about another screen you're out of luck when other players are near. The game's really in need of a more intuitive and faster way to manage weapons and equipment. 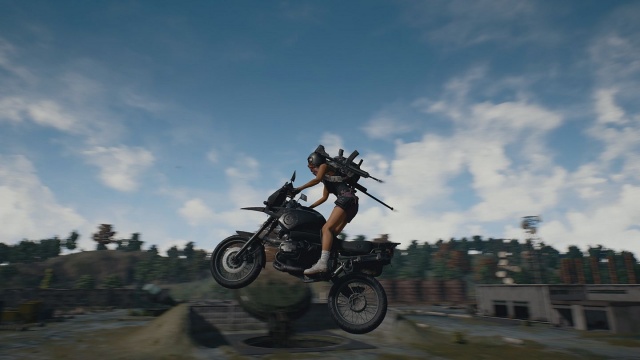 What needs even more work in PUBG, though, is its graphics engine. The game looks like a PS3 game, with surprisingly blocky and low-resolution textures that are hard to ignore. And PUBG struggles to render its low-res world, with low framerates that noticeably drop even lower during battles. This is more than a cosmetic issue as it affects the responsiveness of the game as well, and may prove frustrating to those who've become accustomed to the responsive controls of modern PS4 shooters.

While PUBG delivers the core gameplay of the battle royale genre, it doesn't manage to do it with the sophistication of competing battle royale games on the PS4. It looks and plays like an alpha build of a game that's focusing on getting the basics worked out without worrying about optimization or graphical polish. It's also a threadbare offering, giving you a single game mode while games like Black Ops 4 and Battlefield V give you a whole lot more game modes beyond their battle royale modes. PUBG may have come first to the genre on other platforms, but its PS4 debut feels like a game that the world has long ago passed by.

Final Rating: 66% - PUBG on the PS4 looks and feels more like a low budget knock-off than a game that defined the battle royale genre.