RemiLore: Lost Girl in the Lands of Lore Review

If one thing is for sure, there is a rich, running stream of Japanese-produced stories involving a female high school student and oversized weapons. If you are an anime fan and have somehow not had your fill of these strange tropes, this is for you. RemiLore: Lost Girl in the Lands of Lore is a hack-and-slash played from an isometric angle. While it has fundamentally solid swordplay, the game fails to make combat less repetitive, ending up as skin-deep. Thankfully, it is as long as you want it to be, providing a solid outlet for brainless grinding.

Remi, a schoolgirl, is dusting up a library as punishment for her poor grades. While cleaning, she stumbles upon a magical talking book named Lore. It then accidentally transports her to a fantastical world called Ragnorah, home to research facilities that conduct experiments on magic, dimensions, and celestial bodies. Ragnorah is currently in shambles - dreadful 'mecha-monsters' roam about, and Lore's Master has disappeared. To return to her world, Remi must fight her way through the robots and find the portal home.

I have torn feelings about the two main characters, as well as the villain I do not want to spoil. Remi's bad academic performance is refreshingly relatable, but she is a whiny brat with irritating dialogue. Lore, on the other hand, is a lot more likable. He has a weird and wonderful design that goes beyond his exterior. The tome's locks look like ears and flop (or, in this instance, unlock) depending on Lore's expression. He also has a bookmark that acts as a tail, which gets rumpled up when he is angry. And finally, a chip of paper acts as his bucktooth. Lore is mostly enjoyable to listen to, although he is gradually relegated to exposition dumper and punching bag to Remi's teasing. If one negative is mutual, it is the Japanese voice actors' obnoxious performances. I recommend turning off the speaking audio altogether. 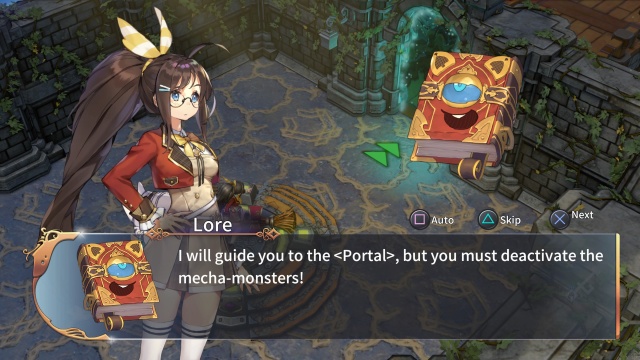 The ten minutes' worth of plot throughout the whole game is rudimentary, setting up a world through bland writing and polarizing characters. Thankfully, the gameplay fares a little better. It is satisfying and fluid, as expected. However, that satisfaction can only last for so long, since there is little depth involved in combat. The primary tactics involved are dashing, which takes up way too much stamina, and running away. There is no blocking or countering, and the combos are inconsequentially showy. There are also different types of enemies, such as stationary ones that shoot orbs from all cylinders or burly brutes that deliver powerful blows. However, these enemies are only fearsome in groups and can easily be overcome by themselves because they are hit sponges. Luckily, Lore's 'Ultimate Spells' can add variety, albeit in short spurts. A spell is tied to a weapon and can serve a variety of battle functions like spraying a frenzy of bullets or freezing enemies. Spells are hit-and-miss - some are overpowered while others are more useless and boring (e.g. a stronger damage mode.)

It turns out the research master really liked sweet treats, so Lore is powered by them. Desserts are dropped by enemies and are found in breakable environmental items. They not only increase the magic meter, but also act as currency for buying upgrades from the menu as well as purchasing from the weapon/potion shops found at the middle and end of each level. This being a rogue-lite, some desserts are lost upon defeat, and you go back to the starting level of the current act. Enhancements range from potion potency to spell efficiency, providing acceptable progression that transfers to each run. The most essential purchase is the weapon drop or 'Weapon Mastery' upgrade. This increases the chances of finding a better-graded weapon on the floor. Rankings range from D to S, which affects their 'DPS' or damage per second. 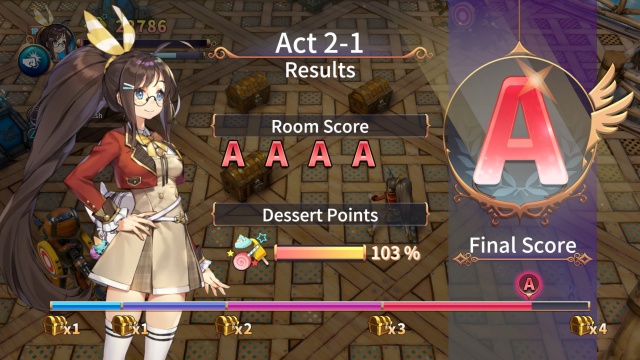 Enemy designs and interiors are underwhelming. The mecha-monsters are instinctive and faceless - never failing to help you zone out during gameplay. Rooms disinterest in their blandness too - mainly consisting of libraries and labs, which made me feel like Remi. However, environments are colorful and chimeric, with each of their background sights striking my eye in diversely pretty ways. From the beach resort's scarlet sea to the tangerine mountains under a city in the sky, these areas' exteriors are vivid eye candy. And the navigation itself is robust, with a mini-map on the bottom right-hand corner of the screen that is handy. Now, if only there was a full map on the menu... 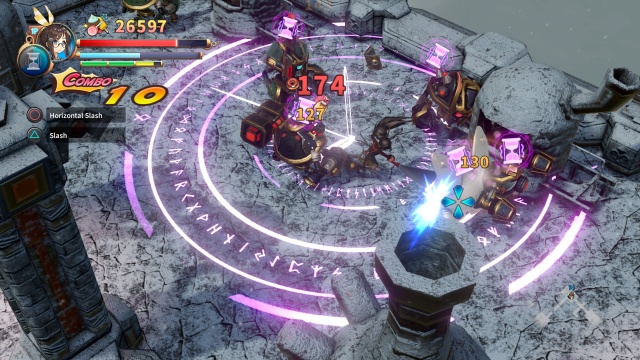 RemiLore boasts an impressive gallery of weapons. There are 6 different types and 213 in total. The varieties range from swift dual blades to hefty hammers. They all attack differently too - even blunt and sharp ones swing with a different swishing sound, and each category has its own list of unique commands. This variety really has something to accustom all playstyles, even if you need to play the game's new game plus or other modes to truly see everything on offer. There are about nine different ones, each adding an extra layer of difficulty or a challenging condition like permadeath or starting out with one HP. To top it all off, there is an epilogue of sorts that allows you to play as a different character. These additions, alongside the excellent co-op, offer an abundant amount of replayability that makes the package worth the price.

RemiLore is a cute hack-and-slash for kids and adults alike. Its procedurally generated dungeons and enemies serve as a good grind. And with 213 weapons and several costumes to unlock, the game made me embrace my inner collector spirit. While its weak story and overall shallowness cannot be overlooked, those looking to mess around with the gameplay modifiers, couch co-op mode, and vast array of weapons will be satisfied.

Final Rating: 70% - How is a high schooler destroying giant killer robots with a broom? The answer is not to think about it.